And there you have it. The either/or market is alive and well. The difference on Wednesday was that the big cap, index-moving tech stocks were allowed to play so everyone had to sit it out which is of course the exact opposite of the prior two days.

The market is now in overbought territory although we need to view it as a window of days not a specific date. I expect my Overbought/Oversold Oscillator to see some downside, perhaps as early as Thursday but if not before the end of the week then next week. Again, it's the math.

Now let's turn to Nasdaq. We look at the Oscillator for Nasdaq (which is also set to be overbought in this time frame), but I have another short-term indicator we can look at here. The Nasdaq Momentum Indicator. Where the Oscillator is based on breadth, the Momentum Indicator is based on price. What I do here is I plug in higher closes for Nasdaq and look for the day that higher closes no longer lift the Momentum Indicator and in fact turn it down anyway. That's what shows the loss of upside momentum, and thus an overbought market.

When I plug in higher closes for the next week, taking Nasdaq up about 500+ points you can see it doesn't matter. After Friday (November 13th) the Momentum Indicator heads down anyway. Please don't look at this as an exact day in terms of timing but rather a general time frame. Look closely and you can see the last few months have seen Nasdaq twist and turn with this Momentum Indicator.

Even prior to August when it appears that it was a steady rise in Nasdaq you can see the overbought readings brought Nasdaq a few weeks of chop not continued upside.

On the sentiment front, I haven't seen the breakdown yet, but the total put/call ratio zipped right back up 1.02 on Wednesday which is a change from what we saw earlier in the week when folks were buying calls a-plenty. But the Daily Sentiment Index (DSI) for the VIX remained at 10. The last time we saw it at 10 was back-to-back days as well (it was at 10 on Tuesday).

The back-to-back mid-August readings were just prior to the last launch upward for the indexes. You might recall back then I harped away that the VIX was rising daily as the S&P went up. It eventually handed us that September swoon.

I would not expect a September type move now unless the breadth turned decidedly sour in a hurry (it was quite poor in August). But in the meantime, the Investors Intelligence bulls are at 59.2% so not quite at 60% but not exactly screaming that there is a lot of room left on the runway. 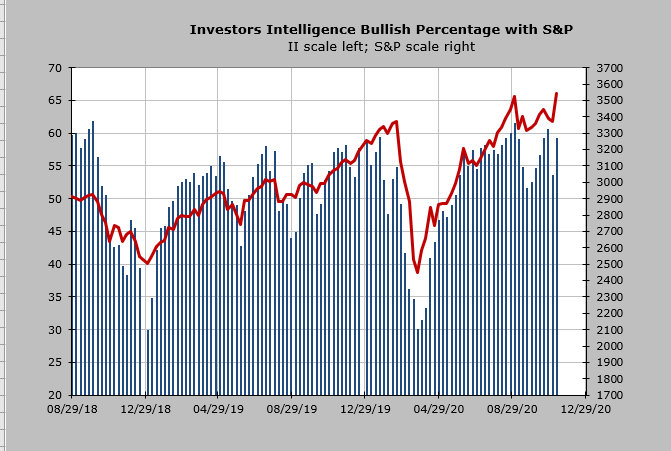