Logic has every place in trading, yet logic doesn't always work. Think of it as a secondary indicator. The issue comes in defining logic.

What's logical to me isn't necessarily logic to you... or worse, to an algorithm. Short-term drivers of the market often center around emotions, something often absent logic. Algorithms have no emotions, but they amplify traders' emotional reactions without adding any of their own. That means more players, more money, but no new logic to balance out emotions such as fear and greed.

Beyond Meat Inc. (BYND) is a great example on how illogical the market can become in the short term. The preferred term is irrational, but in the end, the results are the same. The money-losing plant-based meat "replacement" saw its market value top $7 billion this week. In its most recent quarter, Beyond Meat's net revenue was $40.2 million with a loss of $6.6 million. On the plus side, revenue did grow 215% and the company anticipates breakeven EDITBA along with full-year 2019 revenue of $210 million.

There isn't any. That's the point. Even the analysts who likely should support the company with buy ratings need to back off at these levels.

JPMorgan was one of the first, downgrading the stock to Neutral here on Tuesday morning with a price target of $121 after a Monday close of $168.10. It is worth noting JPMorgan is bullish on the fundamentals, outlining the extraordinary revenue and profit potential of the company.

Beyond Meat, along with Impossible Burger, are the two big-name players in the space. If either of their brands truly catches on with the consumer, then I would expect one or both to be taken over at some point in the next few years, but I'm not sure anyone is willing to chase at these valuations. The goodwill would be crushing.

In terms of the stock action, we've seen this before. Take a look at Tilray Inc.'s (TLRY) squeeze last year and compare it with Beyond Meat's stock movement. Look familiar? 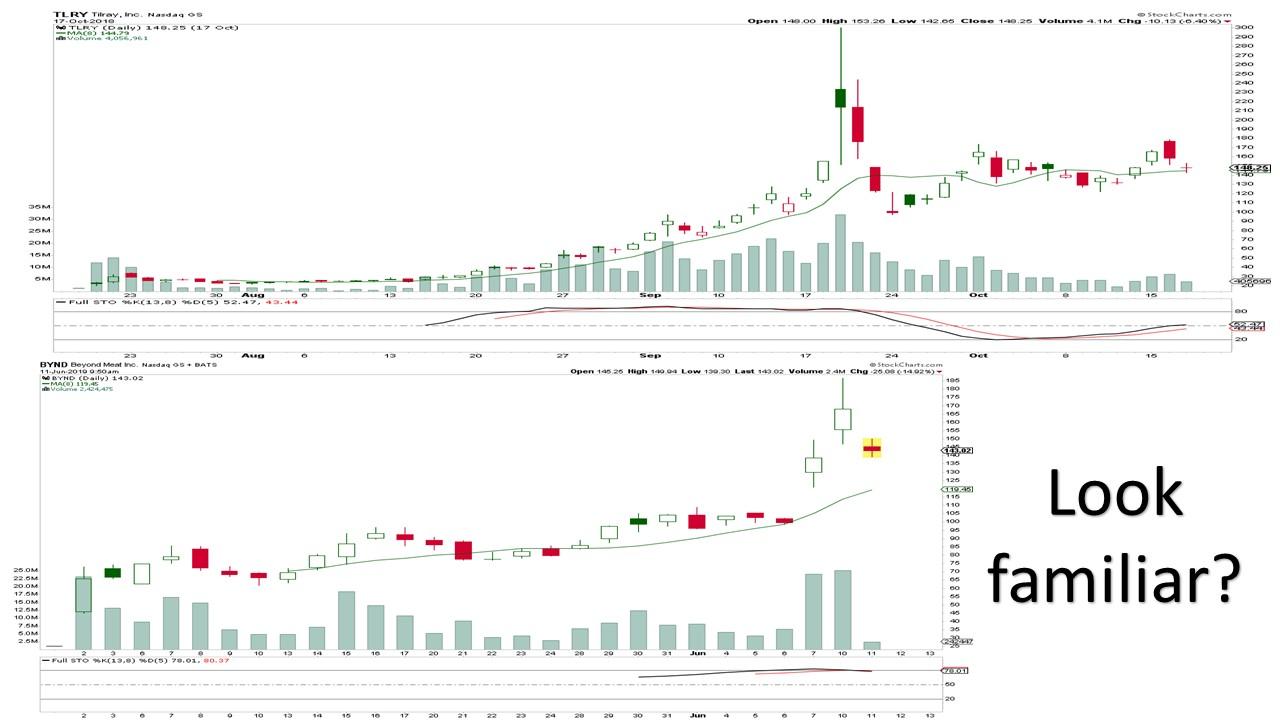 Beyond Meat's time frame to squeeze did come much quicker than Tilray, but I believe it has to do with the amplification factor. Algorithms learned from the Tilray squeeze and applied it against the emotions of shorts, turning their logical shorting into fearful covering (buying). If the pattern follows we could see another two days of selling with the stock returning to the $90-$95 range.

That said, there's no way to play this one unless you are a kamikaze daredevil with a very deep pocketbook. The option's market is still pricing a $22 move by Friday. On Monday, when the stock sat at $170, the option's market had a $21 move priced for this week. That straddle has skyrocketed to $35-plus overnight, but this is a feast or famine. A flat move will kill $3 to $5 overnight simply in time decay.

My thoughts: Sit back and enjoy the early Fourth of July fireworks. There will be better opportunities in terms of risk versus reward to trade Beyond Meat. Today is not that day.

Get an email alert each time I write an article for Real Money. Click the "+Follow" next to my byline to this article.
TAGS: Investing | Stocks | Technical Analysis | Consumer | Food & Staples Retail | Marijuana | Real Money | Cannabis | Stock of the Day