There was no baseball on Monday night. At least not for New York fans. Hence, more time to read, more time to spend with my charts. A stillness. Almost.

My brain craves something it does not see. There are no puzzle pieces that fit neatly together. Sure, the Nasdaq Composite has put together two consecutive winning sessions after not doing so for nearly a month... and on higher trading volume than the day before. That's constructive. The S&P 500, the Dow Industrials and the Dow Transports were all slightly lower by day's end. Those Transports have now followed four consecutive winning sessions with four consecutive losing sessions, and now must retest month-old support. That's potentially less than constructive. Note that the bottom four performing sectors (of 11) on Monday were all cyclical types.

I don't think we'll find what we seek through the study of large-cap equities, at least not at the moment. Major market moves await clarity on the future of the still up-in-the-air "infrastructure (non) deal" specifically and the future of U.S. fiscal policy more broadly. Until then, the action is in the U.S. Treasury market, domestic small-caps, and in cryptocurrency markets. Let's explain.

First up, demand for securities out at the longer end of the U.S. Treasury yield curve has ratcheted up since the Bureau of Labor Statistics reported weaker-than-hoped employment data for a second consecutive month. I have tried to explain this, as I do not see the data being nearly as awful as most economists apparently do. Readers need to (probably already do) understand that my opinion is not mainstream on this. I am apparently an outlier.

The U.S. 10-Year Note went out on Monday night paying just 1.57%, and has flirted with 1.55% here on Tuesday morning, which is where that yield bottomed on Friday. Keep in mind that the U.S. Treasury goes to auction with $38 billion of new 10-Year paper tomorrow (Wednesday) afternoon. Hopefully, indirect bidders ignore Janet Yellen tomorrow as much as traders in the secondary market did on Monday.

The other two financial arenas gathering attention are doing so perhaps for reasons certainly tradeable, but perhaps less investable over the long term. Small-caps have been hot as the Russell 2000 is the domain of the "meme stocks" that have captured the imagination of both retail traders and the high-frequency algorithmic traders that prosper when that group is provoked, not to mention takeover target U.S. Concrete (USCR) . This is where you'll find the likes of AMC Entertainment (AMC) , GameStop (GME) and Bed Bath & Beyond (BBBY) , among others.

Lastly, is the Bitcoin/cryptocurrency story evolving perhaps more quickly than many innocent investors/speculators may be ready for? Let's discuss that right now.

I see you. Hmm. Readers may recall that I had often written on the likelihood that globally, central banks and national treasury departments would eventually crack down hard on cryptos. We have seen this in China. Not so aggressively as of yet elsewhere. I had also expressed some surprise at the muted reaction of the Federal Reserve Bank and U.S. Treasury Department, clearly with the most to lose in terms of power should a shadow economy evolve outside of the U.S. monetary base, thus stripping any global advantage wielded through sustained reserve currency status.

Given that cryptocurrency demand had, along with legitimate or innocent investors/traders/speculators, become the domain of hackers/drug dealers/terrorists/money launderers and the like, readers will recall that I suggested some time ago that perhaps the only reason that U.S. authorities had not yet cracked down on cryptocurrencies was because the U.S. had learned or was learning how to track and maybe even identify those involved and that intelligence was considered more valuable for now than any gains made by heavily regulating a financial arena that was thought to be anonymous, thought to be untraceable.

On Monday, Deputy FBI Director Paul Abbate, in a Justice Department briefing, communicated that the U.S. had recovered 63.7 Bitcoin of the 75 Bitcoin ransom that Colonial Pipeline had been forced to pay in May in response to demands made by 'Darkside," a cybercrime group thought to be operating out of Russia. Abbate announced that U.S. authorities had identified a virtual wallet, and without going into great detail said the funds had been recovered. Unfortunately for Colonial, the Bitcoin recovered is obviously worth less than it was at the time the ransom was paid. Abatte also said the investigation revealed that more than 90 companies had been victimized just by this one group of hackers alone.

This is precisely what I was trying to tell readers earlier this year. The fact that the country with perhaps the most to lose should the world find a way to go around fiat has not taken action had to mean that they were uncloaking what had been invisible and tracking what had previously left no tracks to follow. In other words, the good guys had started to figure out how to trace and follow blockchain technology.

Does this mean that cryptocurrency valuations will soon go straight to zero? No. For one, while even if a transaction might be traceable and a portion of the funds recoverable, there are still no consequences without international cooperation. That, however, will evolve over time. I think. 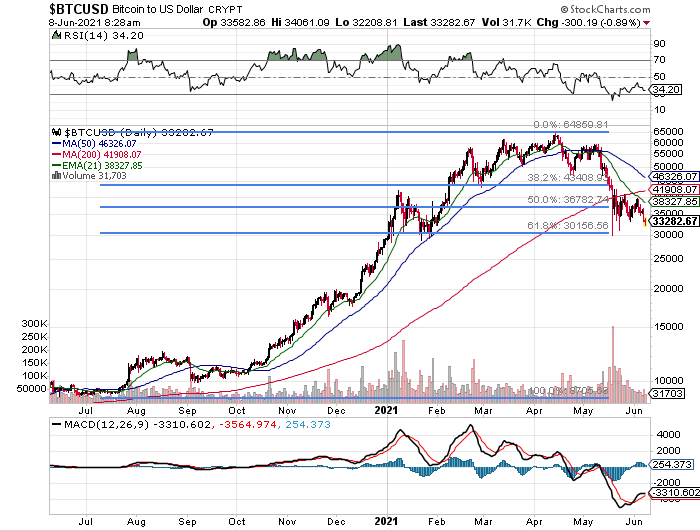 Readers will note that Bitcoin in U.S. dollar terms has bounced off of support at roughly $30,000 twice since peaking in mid-April. This just happens to be a 61.8% retracement of the July-through-April rally. Once again, our favorite 12th century Italian mathematician has made his presence felt. This should not really surprise, given that technicals are the only way to trade an unproductive asset with absolutely no fundamental value whatsoever.

Does this mean that precious metals, specifically gold, will reclaim the title as the lead alternative (ex-money supply) investment vehicle? That's hard to say. While it is clear that price, not value, is simply based on broad public belief, much as it is for fiat currency itself, gold (or any precious metal) is (or can be) physical. It can be stored, It can be worn (an actual productive use), it hurts if you drop a large enough amount of it on your foot, and it is still there the day the lights go out.

The value of Bitcoin or any other cryptocurrency in my opinion is that it eventually will either fall to the level of legitimate, non-criminal demand or rise to the level of broad acceptance as legitimate, non-criminal use as global and legal tender. Now understand that as we talk of a digital yuan and the Federal Reserve and European Central Bank "discuss" such an idea, the truth is that most fiat currency has already long been virtual in nature. I have no idea how long it has been since my hands have touched an actual U.S. dollar or U.S. coin. I remember going to an ATM when we started to think that the virus spreading in Wuhan, China, might spread beyond. I think it's about a year and four month since I have touched paper fiat.

What difference would it make to the average U.S. consumer, with the exception of those reliant upon the cash economy, whether their virtual savings are tracked the way they are now or on blockchain technology? Could be a big change for the banking/financial system, but for the average Joe or Jane the change should be imperceptible. Yes, the U.S. dollar and all other reserve and my non-reserve currencies will go "crypto" as this will make all transactions taxable, which is likely the ultimate goal across nations here.

I could be wrong. I often am. I do not see a happy ending for long-term or large investors in current independent cryptocurrencies as long as civilization stands. On that note, cryptos won't be worth anything should civilization fall, either. On that horrible day, you will wish that you had stored clean water and canned food, as well as gold and silver coins.

Are You Sure About This?

News broke on Monday that enterprise mobile and security software firm MicroStrategy Inc.  (MSTR) will sell $400 million of debt to institutional investors and use the proceeds to add to an existing long position in Bitcoin that is believed to be worth more than $3 billion at a BTC/USD price of $35,000 to $36,000.

According to Bloomberg News, this is the first time that a corporation would issue speculative-grade debt to fund a Bitcoin purchase. I just have one question for a company that trades at a three-figure forward price-to-earnings (P/E) ratio, runs with a total debt balance that simply dwarfs its cash balance, owns a negative levered free cash flow, and a current ratio not just below 1.0, but below 0.9: Are you sure about this? Actually, the question might be for the buyers who will hold such debt securities. Just how much of a discount is necessary to make the risk here acceptable?

You may or may not have noticed that PLBY Group (PLBY) , the old "Playboy" brand, filed on Monday to sell up to 4.8 million shares to institutional investors through investment banks Canaccord Genuity and Stifel on the heels of Monday's 13% run in order to capitalize on such a sudden surge in share price. The effort is meant to raise about $240 million, and who can blame them?

AMC Entertainment (AMC) CEO Adam Aron has shown the way. When gifted with higher market prices for corporate equity that is not supported by the fundamental realities of the business, the man has recapitalized the balance sheet and funded corporate operations. Not only has Aron taken advantage of this unexpected reality, but he has even warned small investors that maybe they should stay away from the stock. This is corporate leadership with a conscience. I don't know if I will be going to the movies ever again (that's really up to my wife), but it's hard not to root for this guy.

I have not bought any Coupa Software (COUP) on this dip, but I am thinking about it.

The most important items for financial markets right now remain the Biden/Capito negotiations that appear to have stalled, as well as the president's openness to an alternative bipartisan plan being put together by a group of six senators apparently led by Utah Republican Mitt Romney.

Get an email alert each time I write an article for Real Money. Click the "+Follow" next to my byline to this article.
TAGS: Bitcoin | Currencies | Investing | Stocks | Terrorism | Treasury Bonds | Real Money | Cryptocurrency