By STEPHEN GUILFOYLE Sep 30, 2021 | 11:11 AM EDT
Stocks quotes in this article: BBBY
Ugly. A whole lot of ugly. That's what I see here.
On Thursday morning, Bed Bath & Beyond ( BBBY) reported its fiscal second-quarter financial results. I would say... "so much for CEO Mark Tritton's turnaround plan," but that wouldn't be fair. I know they are working toward a better day. Or at least I think so.
The company posted adjusted earnings of $0.04 per share, and a GAAP loss of $0.72 per share. By both metrics, earnings missed the mark by more than a country mile. Revenue generation also disappointed, at $1.985B. That was down 26% from the comparable quarter one year ago.
Going into the numbers, I guess I'll try to stick to the GAAP numbers as they are actual impacts to real profitability or lack thereof. Gross margin contracted to 30.3% from 36.7%. SG&A (selling, general and administrative) margin actually improved to 32.9% from 31.6%.
The company's net loss for the three-month period amounted to $73.2M. Tritton explained: "As Covid-19 fears re-emerged amid the ongoing Delta variant, we experienced a challenging environment. This was particularly evident in large, key states such as Florida, Texas, and California, which represent a substantial portion of our sales."
It wasn't just that customers stopped coming into the stores. Tritton added: "Furthermore, unprecedented supply chain challenges have been impacting the industry pervasively, and we saw steeper cost inflation escalating by month, especially later in the quarter, beyond the significant increases that we had already anticipated. This outpaced our plans to offset these headwinds."

For the current quarter, Bed Bath & Beyond expects to see net sales of $1.96B to $2B versus the Wall Street consensus of $2.02B. That's not too far off of the consensus view.
Now, adjusted EPS is another story. The company sees the quarter printing at $0.00 to $0.05. The Wall Street consensus was up around $0.29 on this line. Ouch. For the full year, BBBY expects net sales to print somewhere in between $8.1B and $8.3B. but had to guide adjusted FY EPS down to $0.70 to $1.10 from prior guidance of $1.40 to $1.50.
Still, Tritton says that though the turnaround ran into an obvious obstacle course in late summer 2021, the turnaround continues. If you heard Jim Cramer describe the new Bed Bath & Beyond prototype store on CNBC's Mad Money the other night, you might just believe. Jim did indeed warn at that time that these numbers might not yet reflect the company's efforts.

Bed Bath & Beyond's net cash position, including equivalents and short-term investments, add up to about $1B. This is down more than $100M from three months ago. Inventories are about the same.
What's encouraging here is that long-term debt did not grow. In fact, it contracted just a smidge. Current assets are larger than current liabilities and total assets are larger than total liabilities less equity.
The company runs with a current ratio that probably, contrary to popular belief, is healthy. BBBY will have no problem (my opinion) anywhere in the near to medium term in meeting their obligations. 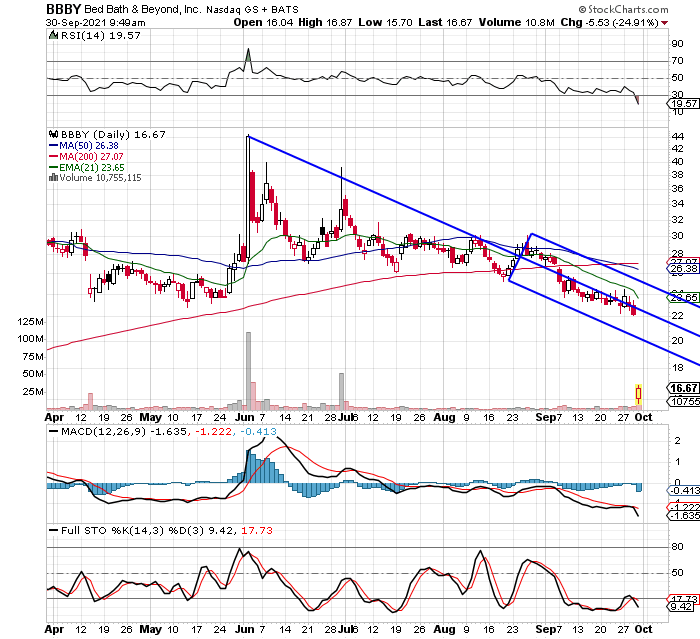 In response to Thursday morning's guidance more than results, the stock has broken. Now, way below all three of the moving averages that I follow closely. Now, badly oversold by every metric that I regularly use to measure such technical conditions. Awful.
You know what BBBY does have in its corner? I mean, in addition to a CEO who clearly has a "can do" mentality? The stock now has a gap between $22 and $16-ish that in my experience tends to fill at some point -- and the name runs with a humongous aggregate short position.
As of Sept. 15, 45% of the entire float was held in short positions -- more than 22M shares. Average daily volume for BBBY is just about 2.4M shares. That's a lot of wood to cut.
That's why I started buying shares in the pre-opening market. My average price is $16.10, and probably could have been lower. I cannot get back to trading the name (my own ethics rule) until this piece hits publication and others can read what I wrote.

Just to make a few bucks, baby. I am not investing in BBBY, but I leave open the possibility. I am here solely with a mercenary heart to take away from the algo crowd who don't even know I lurk in their shadows. Ooh-freakin-Rah. Humans rule.
I see $18 and I am outta here.
Get an email alert each time I write an article for Real Money. Click the "+Follow" next to my byline to this article.
TAGS: Short-selling | Earnings | Investing | Markets | Stocks | Trading | U.S. Equity