BBBY shares plunged Thursday after the company reported a revenue and earnings miss that included just 2% growth in same-store sales.

Tritton said Bed Bath & Beyond has laid out a three-year growth plan and remains on track with those plans. When asked about the company's slumping same-store sales, Tritton noted that Bed Bath & Beyond saw a 77% increase in digital sales, many of which were picked up at local stores. He said the pivot toward an omnichannel experience has been a significant one.

We last looked at the charts of BBBY on Dec. 15 and wrote at that time, "The shares may move sideways a bit longer, but as long as the November/December lows hold traders could be buyers of BBBY. Risk a close below $17.90. $31 is our price target." Traders should have been stopped out on Dec. 31. Let's check and see how we might want to position BBBY in 2021.

In this updated daily bar chart of BBBY, below, we can see how prices popped higher ahead of earnings and fell sharply after earnings. The slope of the 50-day moving average line is still negative. Trading volume increased and the On-Balance-Volume (OBV) line shows a one-day turn lower. The Moving Average Convergence Divergence (MACD) oscillator is still below the zero line but not far below.

In this weekly Japanese candlestick chart of BBBY, below, we can see a picture of a stock that could go either way -- bounce or correct further to the downside. Prices made a strong advance from March and have corrected lower from around the middle of October. Support was generally found around $18 but we can see a recent upper shadow that tells us that traders rejected those prices. The weekly OBV line and the MACD oscillator are still mostly bearish.

In this daily Point and Figure chart of BBBY, below, we can see the big run-up and the equal retreat. Prices could hold, but a trade at $17.50 would be a new low for the move down on this chart and could open the way to further declines. 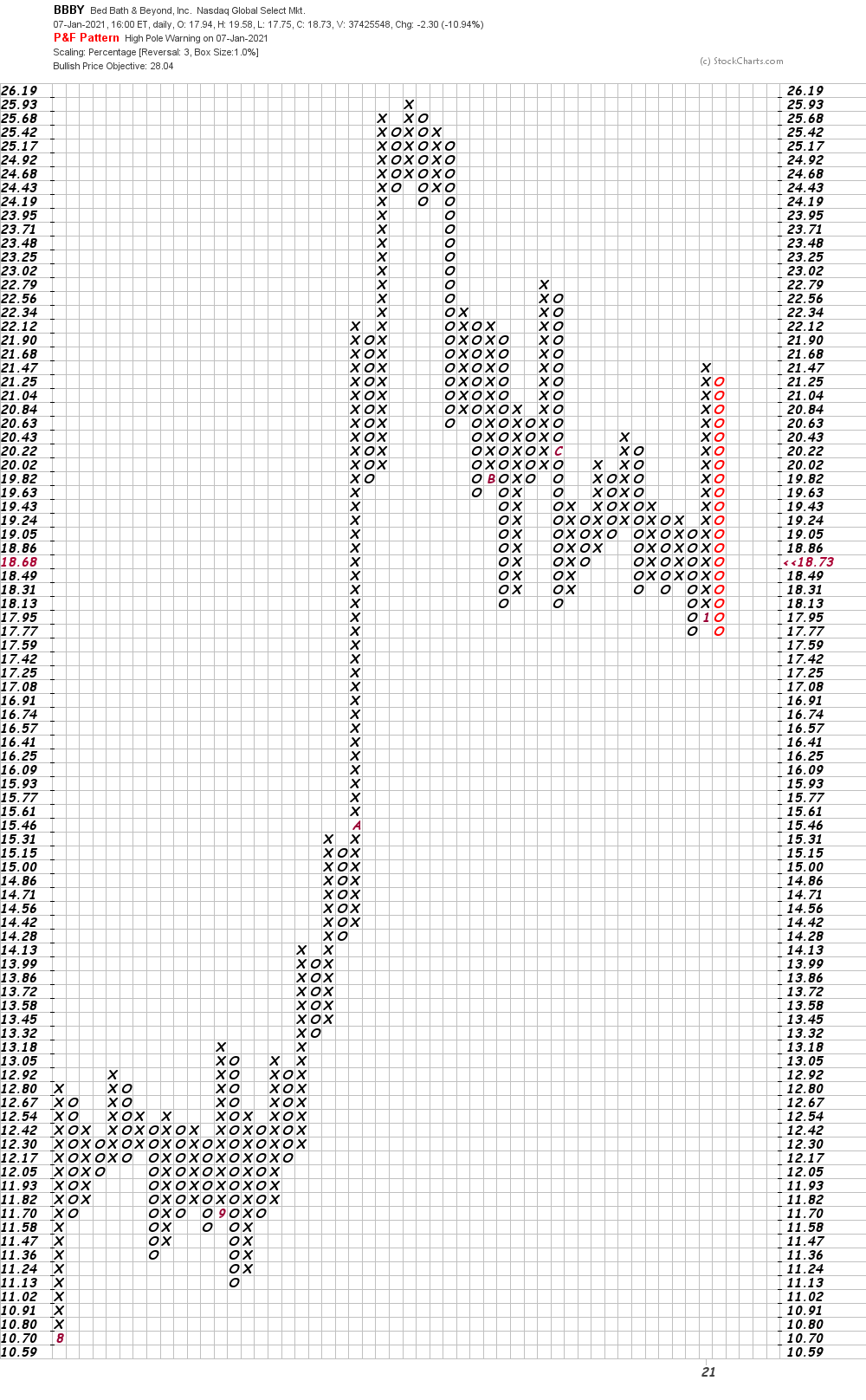 Bottom line strategy: The charts of BBBY are a little touch and go right now. I would stand aside until things become clearer.

Get an email alert each time I write an article for Real Money. Click the "+Follow" next to my byline to this article.
TAGS: Earnings | Investing | Stocks | Technical Analysis | Consumer | Retail | E-Commerce | Real Money