By TIMOTHY COLLINS Jul 11, 2019 | 01:47 PM EDT
Stocks quotes in this article: TGT, BBBY
It's a little bed, bath, and beyond me why anyone would own the stock of BBBY.
Or is it?
I know most folks are hating Bed Bath & Beyond's ( BBBY) stock today. Shares are down 6.5% at lunchtime. Goldman Sachs initiated covered, with a Sell rating and an $11 price target. UBS and Citigroup both lowered their prices targets to $13. The headlines read fairly negative, because of guidance, but I think this one might be cheap enough to own.
The company reported 12 cents per share on $2.57 billion in revenue. Those adjusted earnings were 4 cents ahead of expectations, with revenue coming in slightly below consensus. As I said yesterday with a "beat" by the same amount, this is not a "miss" in the same way $2.59 billion would not have been a beat. Unfortunately, full-year guidance will come in at the low end of the $2.11 to $2.20 earnings-per-share number and $11.4 billion to $11.7 billion revenue number. That earnings-per-share number and revenue number will basically be in line with expectations once we take into account the first two quarters. Also, remember that the initial full-year estimate for BBBY once sat at $1.79.
The issue for Wall Street comes down to the poor same-store-sales performance that saw the figure decline 6.6%. There's no sugar-coating that result. It's ugly. It needs to change. Management has recognized this and announced steps to make changes. From the sounds of it, BBBY intends to take a top-down approach to fixing structure, asset base, and cost structure in an effort to drive top-line revenue grow. In short, expect to see BBBY reinvent or recreate itself over the next few years.
And it has to do this. Target ( TGT) continues to eat away at the company's core.
BBBY doesn't scream buy, but if I were a blend investor, the 6.3% yield would hold appeal. BBBY could easily slide into a blend portfolio on a smaller-scale -- an aggressive, bottom-of-the-barrel -- type of blend. It isn't a name I'd want to overweight, but blend and income-oriented portfolios often want a handful of names with those bigger yields and capital appreciation. Of course, with greater upside risk comes greater downside risk. Fundamentally, most of the metrics outside of growth are attractive. The challenge is those metrics will fade if the company cannot return to at least nominal growth.
On the technical side, BBBY shares are testing the lows from December 2018. I believe the downside is capped at $10, so a few more percentage points. But we're so oversold on everything from momentum to trend to volume that I'm anticipating a bounce back to $11.50, if not $12, over the next month.
I'm a buyer of BBBY shares here, around $10.70 with a sell order at $11.50 on a portion of shares and $12 on the remaining shares. If the stock closes under $10, then I'll re-evaluate and likely take the loss. 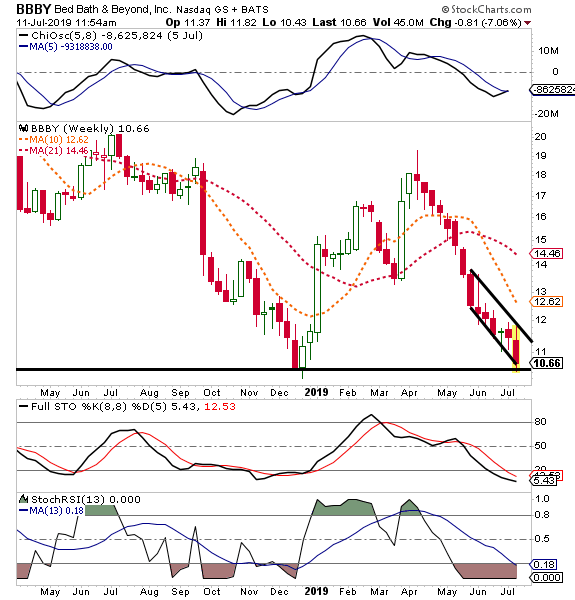 Get an email alert each time I write an article for Real Money. Click the "+Follow" next to my byline to this article.
TAGS: Investing | Stocks | Retail | Stock of the Day