In his second Executive Decision segment of "Mad Money" Monday, Jim Cramer spoke with Mary Dillon, CEO of Ulta Beauty Inc. (ULTA) , the beauty retailer that has seen its shares almost double from their March lows.

Dillon said Ulta has a strong business model that is driven by the diversity of products and services it offers. When the pandemic hit in March Ulta was forced to become an online-only operation overnight. Nearly 75% of Ulta stores are now open for curbside pickup, with 50% being fully open with new health and safety measures.

Dillon said customers have shown they want to shop at Ulta's stores and they've responded well to both curbside pickup and the new in-store protocols. In today's world of online meetings, everyone wants to look their best, she said, and there is pent-up demand for beauty products.

Let's check and see if the charts are beautiful too.

The daily On-Balance-Volume (OBV) line has made a weak recovery from lows in March and April. The Moving Average Convergence Divergence (MACD) oscillator moved above the zero line in April for a buy signal, but recently the two moving averages that comprise the indicator have begun to narrow, which tells us that the trend is weakening.

In this weekly bar chart of ULTA, below, we can see how prices topped out back in 2019. ULTA is testing the declining 40-week moving average line. The weekly OBV line is still in a downtrend from April 2019 but it has improved modestly from March. The MACD oscillator has crossed to a cover shorts buy signal but is a long way from an outright go long signal.

In this Point and Figure chart of ULTA, below, we can see a possible or potential upside price target in the $342 area. 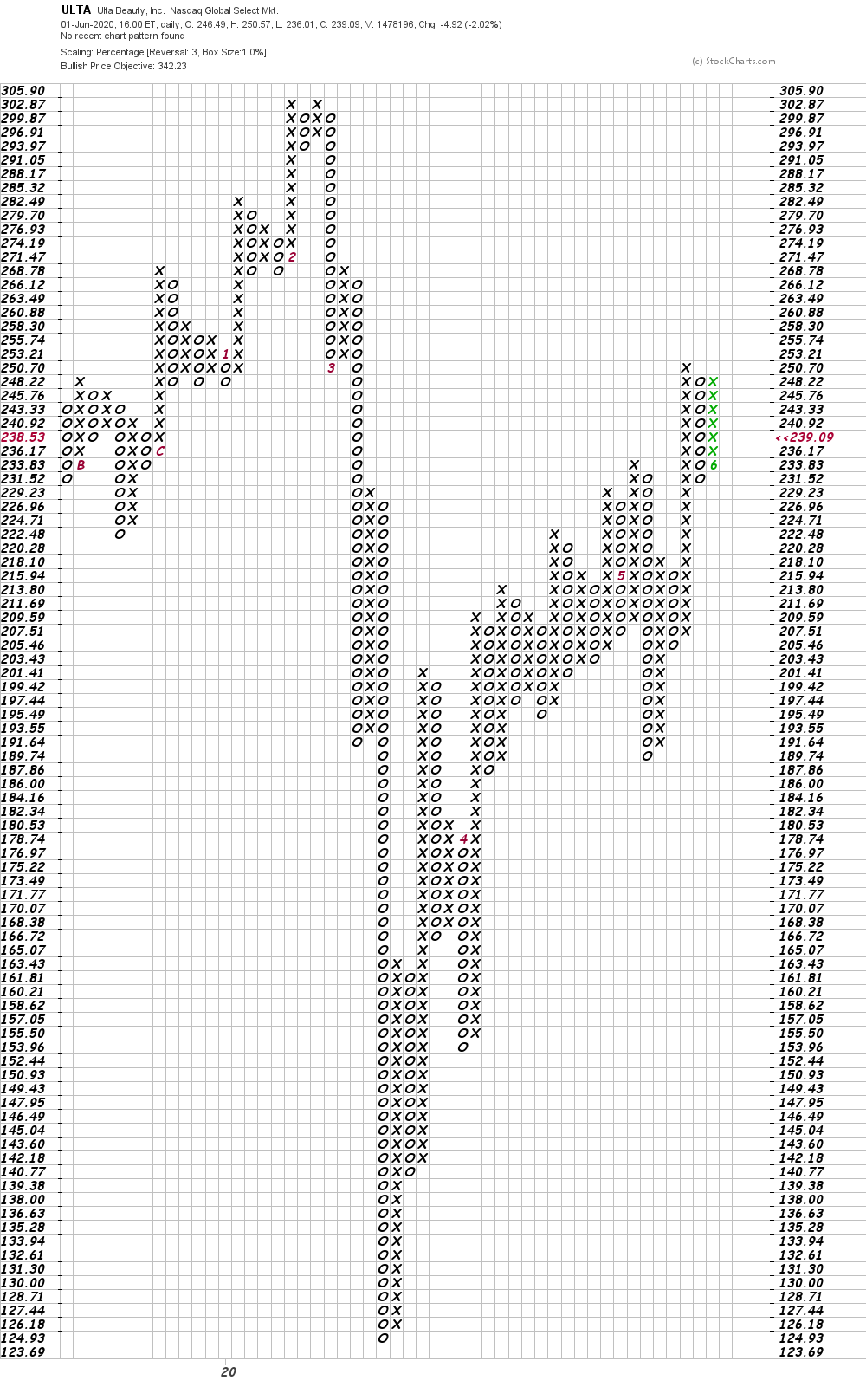 Bottom line strategy: I have noticed that company CEOs have been making assumptions about how Americans will act when "life gets back to normal," but I question some of their conclusions. I am not sure that anecdotal stories and limited surveys can predict human behavior in uncharted waters. Yes, I put on a decent outfit before company meetings, but I and everyone else has the ability to stop the video part of the remote meeting. Getting back to the charts of ULTA, they have improved from March but they face overhead resistance from $255 to $300.

Get an email alert each time I write an article for Real Money. Click the "+Follow" next to my byline to this article.
TAGS: Investing | Stocks | Technical Analysis | Consumer | Personal Products | Retail | Mad Money | Executive Interview | Real Money | Consumer Discretionary