So much for any sort of short-term rally, because sentiment was too bearish.

Nope. The indicators ruled on Monday. It is possible that we get a bounce on Tuesday, because the put/call ratio did jump to 1.14, the highest since late June.

And there has been so much selling in growth and Nasdaq names in the last several days that it now requires a net differential of positive six billion shares (that's up minus down volume) to halt the decline. (Recall the Nasdaq McClellan Summation Index halted and rolled over midweek last week.) You can see that takes a step into a short-term "oversold" condition (blue line) as somewhere near weight billion has produced a bounce in 2022. 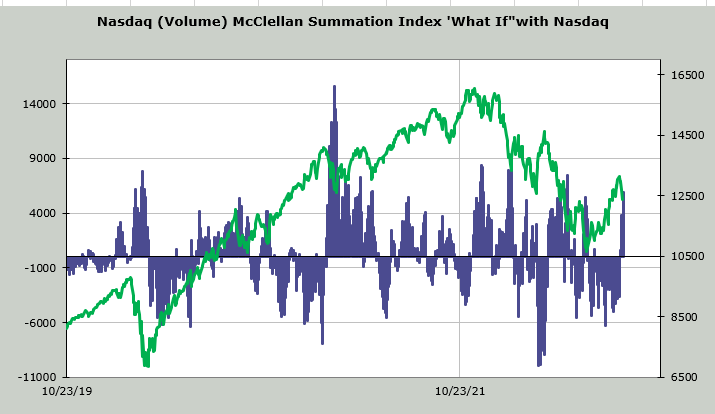 But let's focus on that indicator that is rolling over. Or on breadth, as it started to weaken just over a week ago. Or that the Overbought/Oversold Oscillator is not oversold yet. It has only just gone below the zero-line today.

Let's recall that the number of stocks making new highs peaked in late July and now the new lows are on the rise. Nasdaq saw nearly 200 new lows on Monday-keep in mind it never saw more than 100 new highs in the July move-that is the highest in just over a month. But more, it is now enough to tick the 10-day moving average of new lows upward. 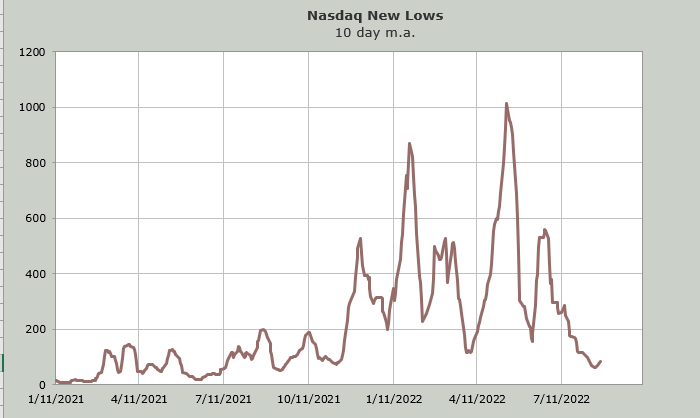 The intermediate-term indicators are also overbought. The 30-day moving average of the advance/decline line is overbought. The Volume Indicator (shown here Monday) got overbought last week when it tagged 55%. To get oversold it needs to get to the low 40s.

So, yes, sentiment is bearish and I expect it will get bearish in a hurry this time. But we also need the indicators to be oversold for sentiment to matter, don't we?

Speaking of sentiment, the currencies are starting to get some attention as the Euro broke to a new low vs. the buck on Monday. The Daily Sentiment Index (DSI) for the euro is at 12, so any further weakness there ought to be short lived.

Couple that with the precious metals, which have been downright awful. Yet the DSI for gold is now at 15 and silver is at 11. What I found interesting on Monday is that the VanEck Gold Miners fund (GDX) , an exchange-traded fund for gold stocks was flat on the day and has yet to break the prior low.

It's certainly something to focus on since the Jackson Hole meeting with the Fed could move these markets.

For the stock market as a whole, even if we rally, I just don't think we're done with the volatility that began late last week.