I had been sleeping lightly. We had found a ditch in which to spend the night, offering no silhouette atop a horizon and against a starry sky. I nodded off with one hand on my Kar-Bar out of habit. My spider-sense tingled. Someone was watching me. I feigned sleep as I stretched my eyeballs to take a look toward the top of the ditch. Two blazing yellowish eyes. The shape of a canine. Ah. Coyotes. Suddenly, another coyote jumped over me to get at something. Apparently, one of my foolish colleagues had fallen asleep while on "firewatch" and had opened a can of c-rations, which had in turn attracted these desert dogs. Oh, he's gonna dig all day long.

Sure, one of these creatures was watching me. How long? I like to think that I caught on quickly, but I don't know. There were several of these critters in that ditch with us. They snuck up on us embarrassingly easily. Lesson learned. Now, we'll always have two guys on firewatch. That moment, though. I still think about it. Within seconds of being alert, my heart had gone from wariness to absolute alarm, to relief that it was only coyotes (coyotes tend to scare easily). Point of the story? You never know. You really never know who or what you are screwing with. Fortunate way to learn a life lesson. I'll never forget those eyes. Guess he was their lookout. Way better than snakes.

How does one even begin to describe what passed for price discovery across U.S. financial markets on Thursday. The S&P 500 gave up 1.1% for the session after it had been up significantly for the day. The index undercut the lows of December and rolled back the clock all the way to October, while closing at session lows and failing to make contact with its 50-day simple moving average (SMA) for a fourth consecutive trading day. The S&P 500 on Thursday closed at a 4% discount to that 50-day line and just a 1.2% premium to the far more dangerous 200-day SMA. That one will be the heartbreaker.

The Nasdaq Composite had been up as much as 2.1% for the day prior to the bloodletting that left the index down 1.3%. The Nasdaq Composite has now closed at the very bottom of its daily range for three consecutive sessions, and four of the last five. Every day this week, the index has failed as it approached the all-important 200-day SMA. Apparently on Thursday, risk managers across Wall Street had finally won their battle with portfolio managers at enough shops to cause a noticeable avalanche. Waves of sell programs hit trading floors over the final two hours of Thursday's regular session. This index closed 4% below that 200-day line and a stunning 8.6% short of its now-forgotten 50-day SMA.

The Russell (small-cap) 2000, down 1.88% for the day, closed at its lowest level since Jan. 5, 2021. That hurts. The index suffered a "death cross" (50-day SMA crosses below the 200-day SMA) earlier this week, and algorithmic traders have responded accordingly. More than a year of sideways up in smoke for the small-caps. Even the Dow Jones Industrial Average, the blue-chip index, while not even close to being statistically significant, still retains an elevated public profile and has the ability to break hearts. That's exactly what the Dow Industrials did in surrendering their 200-day line but remaining within striking distance.

Perhaps the most dramatically negative action for this week has been experienced by the Philadelphia Semiconductor Index. You've got to see this. 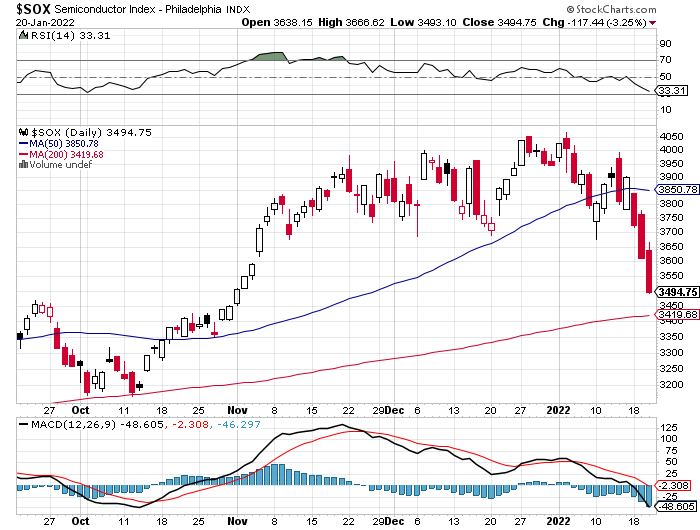 I like to call it "three days of hell" as the most focused-upon index for the semiconductor industry has now given up 10.4% week to date. That's 10.4% in three days. Incredible.

I came into 2022 with the semis as one of my four focus areas. (Nice goin', Sarge) Fortunately, the banks and aerospace & defense had also been areas of focus, and I had to adopt energy on the fly. Another area of focus had been entertainment, which had been positive, until Thursday. Needless to say, after that Netflix (NFLX) guidance that this group is on its heels.

Just for the record, I did go long NFLX overnight for a trade. (Average point of entry, $407.50) I do understand that this is as much gambling as it is trading. It's certainly not investing. I also added to Disney (DIS) in self-defense as the Netflix pin action spread. That's more investing than trading or gambling.

Bond traders supported Treasury securities quite well on Thursday and into Thursday evening. The US 10-Year paid 1.82% on Thursday afternoon, which was down one basis point for the regular session and pays 1.79% at zero dark-thirty on Friday morning after grazing the 1.77% level earlier.

...the spread between the yields of the 90-day T-Bill and that 10-Year looks quite healthy.

However, the spread between the yields of the 10-Year and the US Two-Year Note has been volatile and is trending toward flattening...

While it makes sense that the slope of the curve would warp in this environment, this is not in my opinion, yet cause for concern. We know that economic activity has rapidly slowed. It can and will get a lot worse than this if outright economic contraction becomes part of the narrative. It is not, at least not right now, part of the conversation.

Oh, By the Way

The VIX and all three Put/Call ratios that I follow are all elevated from where they were on Wednesday, but not really at levels that I would consider panicked just yet. Another day like Thursday may just put us there. You need "there" if you are one of those cowboys hoping for a capitulatory flush.

I don't really think this paragraph is necessary. I think that if you read me early in the morning then you are probably more aware than the average bear (get it?). That said, I feel that we do have to cover breadth. Losers beat winners at the New York Stock Exchange by about 3 to 1 and at the Nasdaq by roughly 5 to 2. Advancing volume increased market share over Wednesday's performance. Remember that equities were in the green for most of the day. Advancing volume took 22% of composite NYSE trading volume and 33.6% of composite Nasdaq volume.

Aggregate trading volume increased for names listed at both of New York's primary equity exchanges and for names subordinate to the Nasdaq Composite. However, and maybe this is a silver lining, aggregate trading volume for stocks subordinate to the S&P 500 actually contracted slightly and fell short of the 50-day trading volume SMA for that index for the second consecutive day. Still, the day must count as a serious day of professional distribution, with much of that anger focused on the Industrial, Technology, Materials and Discretionary sectors. That's pretty much economic growth and growth- type stocks wrapped up in a box together.

The Worst Chart in the World

Peloton Interactive (PTON) reported preliminary fiscal second-quarter revenue of $1.14 billion Thursday night, which is slightly below Wall Street's consensus view of $1.15 billion. Peloton is expected to report on or close to Feb. 8. Guess the company thought that it better say something after the stock gave up 23.9% on Thursday and closed at an 85.8% discount to its January 2021 high.

In addition, ending (for the quarter) connected fitness subscriptions printed at a rough 2.77 million, which was below guidance of 2.8 million to 2.85 million. Adjusted EBITDA will land in a range spanning from a loss of $270 million to $260 million, which, believe it or not, is better than expected. However, the net loss will likely print in a range of $481 million to $423 million.

The real story was in the news that CNBC had broken during the day. It appears that Peloton will be forced to halt Bike production in February and March, while pausing production of the higher-end Bike+ into June. Peloton will also pause the manufacture of its treadmills for six weeks. All due to a lack of demand.

I have written about this company before. The products, even after cuts, are priced way out of the reach of the middle class, and the classes themselves are just not something different or better than what is available elsewhere for less. A lot less. 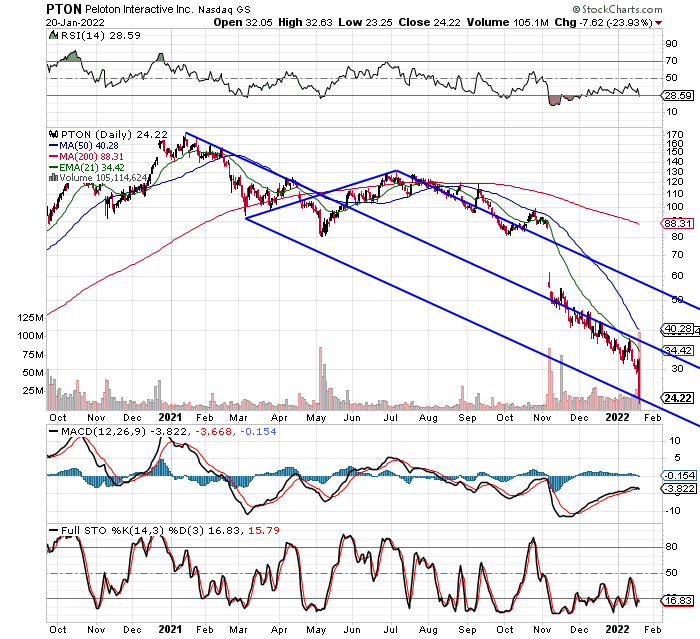 Word to the People

Remember your discipline. Respect your target prices and your panic points. Risk management is perhaps the least appreciated and most important skill learned over a lifetime of trading securities. You CAN manage this.

"Accept the challenges so that you can feel the exhilaration of victory." -- - General George S. Patton, Jr.