Although we still have not seen sell signals, a few more cautionary signs have appeared, along with weakening breadth, and our concerns remain on peak levels of bullish sentiment in combination with apparently extended valuation.

The major equity indices closed mostly lower yesterday with negative internals on the NSYE and Nasdaq on lighter trading volume. The one exception was the Nasdaq Composite Index (see below), posting another new all-time closing high.

A few potential warning signs appeared -- the Russell 2000 Index closed below its near-term uptrend line and is now neutral, while the S&P Midcap 400 and Value Line Arithmetic Index registered bearish stochastic crossover signals. But these crossovers are not actionable as yet, as support levels have not been violated. 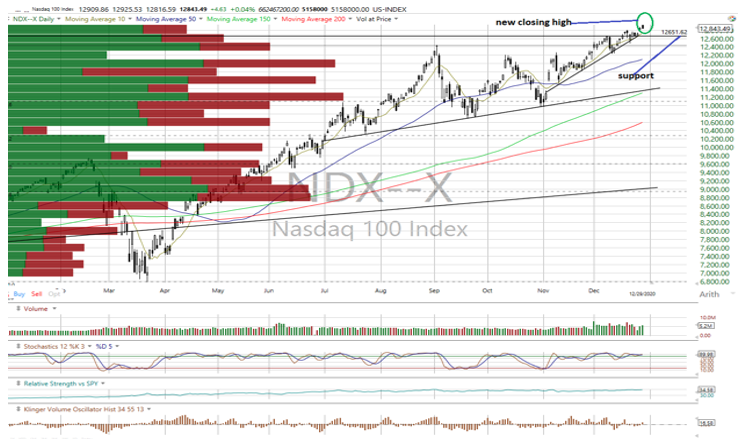 Market breadth deteriorated to the point that the cumulative advance/decline lines for the All Exchange and Nasdaq closed below their near-term uptrend lines and are now neutral. But actionable sell signals have yet to appear on the charts, as supports have held.

The Data Say Caution Is Warranted

Although the one-day McClellan OB/OS Oscillators remain neutral on the All Exchange, NYSE and Nasdaq (All Exchange: -40.09 NYSE: -39.91 NASDAQ: -41.33), the psychology data and valuation continue to suggest the markets are vulnerable should unexpected negative news hit the tape.

The Open Insider Buy/Sell Ratio is neutral at 27.54, but continues to show insiders have consistently been on the sell side within the rally. In contrast, the leveraged ETF traders -- measured by the detrended Rydex Ratio (contrarian indicator) -- remain bearish, as the leveraged-long ETF traders extended their leveraged-long exposure to a bearish 1.49.

The Investors Intelligence Bear/Bull Ratio (contrary indicator) was unchanged this week, at a bearish 17.2/63.6, and is at peak levels seen over the past decade. The AAII Bear/Bull Ratio saw little change, at 25.05/45.02, and remains near peak levels as well.

We remain neutral in our near-term out, but the data and charts suggest more cautionary signals are starting to appear.

Get an email alert each time I write an article for Real Money. Click the "+Follow" next to my byline to this article.
TAGS: Investing | Markets | Stocks | Technical Analysis | U.S. Equity