What? Where? Who? Us, that's who.... or should I write U.S. Either way, the who we are and the future we face together are the same. We will find small victories where they are and we will mount tremendous obstacles because we must. Together. Stay focused. Always know that we can do this. That we will do this. All we are is a lot more than you think, and all we are is all we need.

A couple items that we follow here seem to have simply stopped in place and started moving sideways, at least for a couple days. Front-month physical gold futures have paused to catch a breath just below $2,000 as the euro has hit some resistance versus the U.S. dollar. The U.S. 10-year note has yielded between 0.52% and 0.59% for more than a week, with a sort of gravitational pull toward 0.55%. The spread between what three-month T-bills and that 10-year note pay very slowly has dropped below 45 basis points.

Alarming? Maybe not in this environment, but the trend is one that is narrowing since late May. Not a good sign for those who are looking for future economic growth, nor for those bankers worried about future net interest margin.

Equity markets seem to find reason to rally. That's a good thing, even if it isn't supported fundamentally for those charged with making a living in this marketplace. Money has to go somewhere. Cash on the sidelines, and cash newly created, is meant to improve conditions of liquidity. There is inflation. In equities. In commodities. We already have been witness to a second quarter that looks awful but could have been far worse if not for the fiscal support provided to the consumer. The third quarter almost has to look impressive even if artificial. Though the "vee"-shaped recovery would be visible in earnest earlier if the U.S. posted monthly GDP results. Then again, might artificial impact be considered a fundamental input?

Reported monthly GDP, third quarter, is where one will see economic activity pick up statistically. Fourth quarter? There is a lot of hope for the fourth quarter. The truth is that economic performance across the nation in late 2020 will be far more dependent on confidence in the rapidity of vaccine distribution as well as in the national election. The fourth quarter is when the euphoric-looking rebound off the horrific-looking collapse flattens. That is when it becomes possible for the economic community to begin to assess just what the short- to medium-term size of the U.S. economy really is. That might be the first sign of an actual base line. Until then, we are just silly people trying our best to act smart.

Over the years Chicago Federal Reserve President Charles Evans, or really all those who traditionally have leaned toward easier money, and I have not been in the same camp very often when opining on monetary policy. Those fundamental disagreements over what might not create increased consumer-level inflation seem to be a long time ago. When was the last time any economic thinker you read on a regular basis even mentioned the Phillips Curve? Anyone?

What is truth? We used to consider the natural development of price discovery due to basic human response to conditions of both surplus and scarcity to be about as truthful as numbers possibly could be.

On Monday, Charles Evans stated the obvious: "If we go very long without somehow addressing the reduction and evaporation of that (fiscal) support, I think it is going to show up in lower aggregate demand and that would be very costly for the economy." Evans added, "Anything that helps us avoid... second-wave scenarios is just absolutely crucial." Quite blunt. Quite correct.

Leading Democrats and White House officials met again on Monday, for hours. Anything change? Still no agreement on just how much money to spend (create) on controlling the spread of this virus or on aid to state and local economies. No word on what is the headline maker for many Americans. That would be the federal stipend to state-level jobless benefits that had been $600 per week and expired on Friday.

Still, both sides seemed more optimistic than they had been. After the meeting, Sen. Chuck Schumer of New York spoke of a mutual desire to get something done and soon. Treasury Secretary Steven Mnuchin spoke of being "open to a bigger package."

When is the elusive eleventh hour? Really, it was last week. Still, both sides appear to be at least trying to refrain from openly insulting the other, and Wall Street picked up on that.

The Nasdaq Composite scored a new all-time high, that index increasing by almost 1.5%. Of course, information technology led the way. The Technology Select Sector SPDR ETF (XLK) outran both the Nasdaq Composite and the Nasdaq 100, ripping off a gain of 2.46% for the day. To be sure, trading volume tailed off, but that was to be expected, the day being a Monday after a month-ending Friday. Breadth really was not bad at all for the day. Though five of 11 sectors finished lower, the two bottom rungs on the daily performance tables were reserved for the bond proxies, which makes some sense. Winners beat losers for the day by almost two to one at the New York Stock Exchange and more like 2.5 to 1 at the Nasdaq Market Site. Advancing volume swamped declining volume at both exchanges and came close to a 3 to 1 ratio up at the Nasdaq. Side note? Small-caps performed as well as anything else on Monday.

This is "Jobs Week" and that data just might be the unspoken deadline that legislators and members of the administration (both sides trying to appear proactive) are up against. Investors and economists alike will peruse the ADP numbers for private-sector job creation on Wednesday morning. Thursday then brings with it weekly data on jobless claims. That data point has stopped moving the right way. On Friday, the Bureau of Labor Statistics releases numbers that likely will reflect conditions created as the pandemic struck the U.S. Sunbelt in earnest. There will be no way to sugarcoat what viral spread may have done to such populous states as California, Texas and Florida.

In other words, the entire narrative around labor market recovery may need to change by Friday. And Washington needs to be seen as acting ahead of such data, especially if, as expected, labor markets have taken a detour on their way back.

For the first time I can remember, I go into Walt Disney Company (DIS) earnings here on Tuesday with no rooting interest. Hard to believe. Disney is expected to show a loss on revenue that could decline by almost 40%. Who would have thought it possible with Disney, which is a holding of Jim Cramer's Action Alerts PLUS charitable trust?

Disney's famed theme parks have been open and closed at times, though mostly closed, globally. The studios have been forced to delay releases of a number of movies that would have been drivers of revenue as recently as early this year. Now? Who knows. The cable television networks, ESPN in particular, have struggled to air content as both professional and college sports had to be paused.

The one potential bright spot might be Disney+, the streaming service that competes with Netflix (NFLX) , among several others. The good news? We expect that subscriptions to the service have remained hot. The not-so-good news? This unit is not even expected to post a stand-alone profit for years. The early effort was meant as a market-share grab. Tonight's call should be a doozy.

What do they do? Oh, nothing really, just digital services and e-textbooks (as well as print textbooks) to students via Chegg's online platform. Hmm, just may have a growing business here.

Readers should know that the firm now guides third-quarter total net revenue toward $140 million to $145 million versus Wall Street consensus of around $123 million. Chegg also provided full-year guidance for net revenue of $605 million to $615 million. That measures up again versus the consensus view down around $551 million. 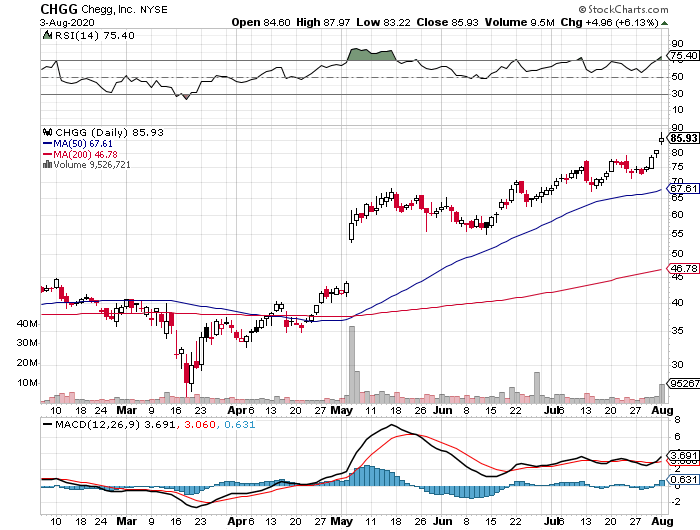 Overbought and overvalued? Probably, at 75x forward looking earnings. Still, I think I'll hang on to a few of these. Let's see what the shares do here on Tuesday morning.