Let's look at the higher high in the ratio of the Bank Index to the S&P 500. The big downtrend line was crossed -- see the blue line -- but now we also have that higher high -- at the green line -- in place.

This doesn't guarantee that the banks will keep running, but it does represent a change in the pattern that we've seen for the last two years. Not one of those rallies over that time has made a higher high in the ratio, let alone crossed the downtrend line. As long as the ratio stays over that blue downtrend line, I think it's a plus for the banks.

But as I drew in on the chart of the Bank Index on Tuesday, I believe that it breaks out, crossing resistance, runs for a day or so and then pulls back. Tuesday was the breakout, so it ought to pull back by the end of the week.

Does it have to pull back? It doesn't -- but bond yields came down on Tuesday as they should have, though no one seemed to notice. And the market is now overbought.

As far as sentiment goes, there was some giddiness in the air in the early morning, but the late day decline saw much of that evaporate. But the Investors Intelligence bulls are now at 52.8% so they have managed to move into the bull camp rather quickly. 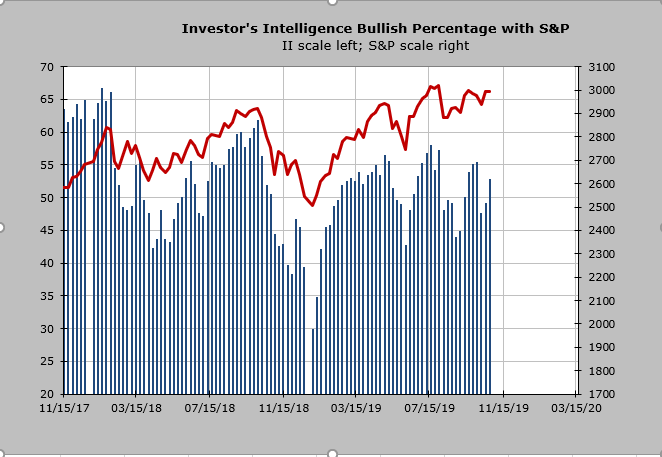 The McClellan Summation Index is still heading up, which is bullish for stocks. The 10-day moving average of new lows is still heading down. The test will be in two-to-three days, when we could see it turn back up. And the number of stocks making new highs is still fewer than the last time we were up at S&P 3000.

This means not much has changed. It means the indicators remained mixed. It also means that for now, the poll I did two weeks ago asking if folks thought we'd breakout over 3025 or under 2825 is still in play, because the trading range is still in play.

Get an email alert each time I write an article for Real Money. Click the "+Follow" next to my byline to this article.
TAGS: Investing | Stocks | Technical Analysis | Financial Services |