Negative consequence associated with this rapid reopening? Hard to say just yet, still hoping for best outcomes. Almost on a daily basis, certainly more than weekly, some pharmaceutical business or another lets us know that they do in fact have Covid-19 in the cross-hairs. Merck (MRK) was Tuesday's big fish.

Trading volumes for Tuesday were significantly elevated from Friday. That said, the bond market closed early that day, so the comparison is not apples to apples. Still, breadth was impressive. At 11 Wall Street, advancing volume clobbered declining volume by more than five to one. Up at Times Square, the ratio was closer to two to one.

That might just make sense, given that financials led the way, and the financials themselves were led by the banks. Was it not JPMorgan Chase  (JPM) CEO Jamie Dimon, perhaps our nation's most famous banker, who spoke optimistically about the prospects of a rapid economic recovery that would include far lower rates of unemployment. Dimon also spoke positively about the aggressive stance taken by U.S. policy makers.

It stands to reason that if Dimon is closer to correct than incorrect, certain parts of the economy that, from the perspective of the financial marketplace, had priced in something along the lines of Armageddon, would see anything short of that as a market tailwind. It would stand to reason, that a less complete than projected default cycle would cheer investment in banks, as Treasury yields moved out just a tad.

Keep in mind that the financials as a sector came into this week trading at just 14.6x next twelve months earnings, far below the broader equity market. Makes perfect sense that the Industrials would follow along with the financials, led by the Transports, and that mid-caps and small-caps alike would outperform their much larger siblings.

Fly in the Ointment

In all honesty, the day's movement was not nearly as pretty as the picture painted by many after closing bell. Over the final half hour of regular trading, the major indices all acted the part of a pea rolling off of a table.

That final hour brings with it higher trading volume. Always. While volume for the day in its entirety was overwhelmingly supportive, there was certainly at least on some level, a distribution of profits over this final half hour as the Nasdaq Composite finished the session with a very pedestrian increase (+0.17%) -- and maybe more importantly, the Nasdaq 100 ended the day in the red. (The Nasdaq 100 contains the 100 largest companies, excluding financials, listed at the Nasdaq Market Site, based upon market capitalization.)

This index has become a loose proxy for the high-tech/biotech focused kind of investment scheme that has worked so well during the era of the coronavirus lockdown. That said, the ball is now moving the other way. Take a look at this. 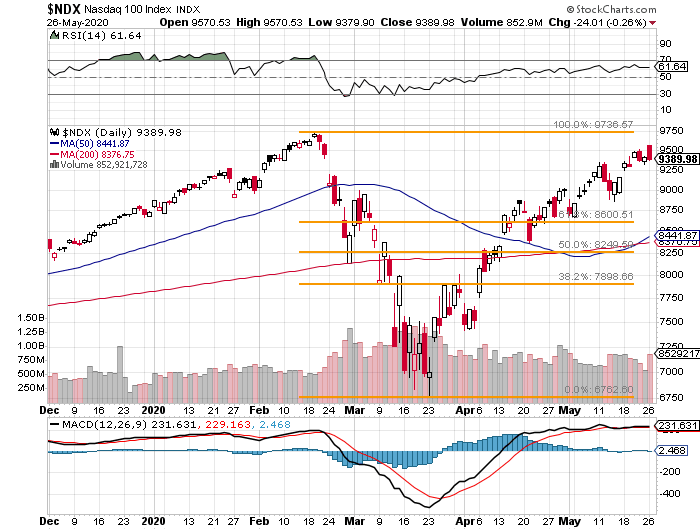 At a glance, this chart looks just fine. Relative Strength is still on the robust side, even if the daily Moving Average Convergence Divergence appears a bit more elevated than I prefer across all three of that metric's components (12, 26, and 9-day EMAs).

The Nasdaq 100 bulls will note the new "golden cross" that took nearly three weeks to create. They will also cheer the fact that, technically at least, this trade is not overbought. The bears? Bears will see a second day in three where the index closed at or close to the low of the session. In terms of sentiment, this implies an increased willingness across the community of portfolio managers to take profits where they have them, but not in the form of a fire sale. In short, it could mean that while there is no panic, there are likely a certain number of target prices being met, and if some of these folks think like me... it may be part of their core set of disciplines to take some action as one's own levels are breached.

Does this mean that this bull rebound is entering its final stages? Not necessarily. It could mean that the time has come to rotate allocation. We already see this taking place. It also, in my experience, can signal a pause, or a stalling of enthusiasm for a certain class of assets. Sideways often just means base building. Base building is a good thing. That makes sense with the Information Technology sector trading above 23x forward-looking earnings, and with many states moving toward reopening their economies so aggressively.

Equity index futures are trading well north on Wednesday morning as opposed to the way equities themselves closed the book on Tuesday. Futures have mirrored European equity markets through the wee hours, as much of Europe also moves toward removing economic restriction, and as the European Commission prepares the way for bailout funding to aid in recovery with the hopes of backing by both Germany and France, the engines of the larger eurozone of monetary union.

Domestically, I think at least two interesting factors aside from the comments made by Jamie Dimon stick out. First, I don't know how April New Home Sales (released by the Census Bureau) not only crushed expectations, but topped the month of March sequentially. Either the number is wrong, or the people buying new homes are far more confident in their futures than has been portrayed. Secondly, anybody else catch White House economic advisor Larry Kudlow on Tuesday? Kudlow mentioned Senator Rob Portman's (R-Ohio) proposal of replacing the $600 federal boost to state weekly unemployment benefits that does expire with a $450 weekly boost for laborers returning to work.

Does this matter? We all know that close to 39M claims for jobless benefits have been filed over the past nine weeks. Yet, continuing claims appear to have stalled around 25M. Have approximately 14M workers already been called back by their employers? If so, the media has been awfully quiet about this development, which would be quite obviously positive. We all know folks who have been called back, and we know folks for whom returning amounted to a pay cut. This may just ease the decision to go back for folks with mouths to feed who are put in this position.

Yes, rising tension between the U.S. and China is still a negative. The U.S. is still said to be considering economic sanctions tied to Beijing's level of control over Hong Kong. The problem there is that what Beijing sees as an internal situation, the rest of the world sees as an Asian economic hub that will lose its luster if it should lose the level of semi-autonomous control the city has enjoyed since lowering the British flag in July of 1997.

One other factor that markets will watch is the spread between short-term and long-term interest rates. While the spread between U.S. three-month and ten-year yields have remained within a tightly controlled range since early April, the entire curve did show some weakness on Tuesday as Treasury pushed out $44B worth of two-year paper, which was the largest auction in the history of this (maturity) series. don't worry yet. That auction did just fine. As Treasury must borrow, and borrow in size moving forward, stability here becomes ever-more important.

Later today, Treasury will bring $45B worth of five-year notes to market and tomorrow (Thursday) $38B in seven-year notes. This increase in borrowing comes as the central bank has recently slowed in its aggression, giving free markets more control over this space. Expansion in the steepness of the curve in general can be seen as greasing the wheels of both economic growth and consumer-level inflation which has certainly not been an issue. That said, these auctions must remain stable, and currency valuations must remain relatively in line.

You probably will not see overt weakness this week. Going forward, however, this is where control over all things financial, or lack thereof, will be first visible. In the meantime, this condition is a real-time positive for bank stocks. My focus here has been Wells Fargo (WFC) , which led my book on Tuesday. They said it could never happen.

Get an email alert each time I write an article for Real Money. Click the "+Follow" next to my byline to this article.
TAGS: Economy | Fixed income | Indexes | Investing | Markets | Politics | Stocks | Trading | World | Housing Market | U.S. Equity | Coronavirus