For his second "Executive Decision" segment of Mad Money Thursday night, Jim Cramer spoke with Brian Moynihan, chairman and CEO of Bank of America (BAC) for an update on the company's social equality initiatives.

Moynihan explained that Bank of America began with an investment of $1 billion to help local communities and, over the past year, that amount has almost doubled. Bank of America is providing equity directly to communities in need as well as making grants and donating supplies to local healthcare centers.

When asked about the government's involvement in stimulus efforts, Moynihan said that it's not the government's job to take a stake in local businesses. He said there is plenty of private investment available.

Let's check out the charts of BAC to see if investors are taking an initiative.

In the updated daily bar chart of BAC, below, we can see that the shares are up about 50% from their March low but it has taken a long time to eke out that gain. Prices are above the rising 50-day moving average line and above the 200-day line. We can see a bullish golden cross of these two averages in late November.

The On-Balance-Volume (OBV) line bottomed in March-May and improved until August when it turned sideways. Buying of BAC is going on but it has not yet translated into a strong move up for the OBV line.

The Moving Average Convergence Divergence (MACD) oscillator hugged the zero line for several months before moving above the line in November. The oscillator has since crossed to the downside for a take profits signal.

In the weekly bar chart of BAC, below, we see a mixed picture. The "big picture" is that prices have been in a sideways pattern for three years. It has taken all year for BAC to rally above the 40-week moving average line, which just turned positive.

The weekly OBV line shows improvement and is close to breaking above its December 2019 high. The weekly MACD oscillator just moved above the zero line in November for an outright buy signal in this time frame.

In this daily Point and Figure chart of BAC, below, we can see a bullish pattern with a potential $37 price target. 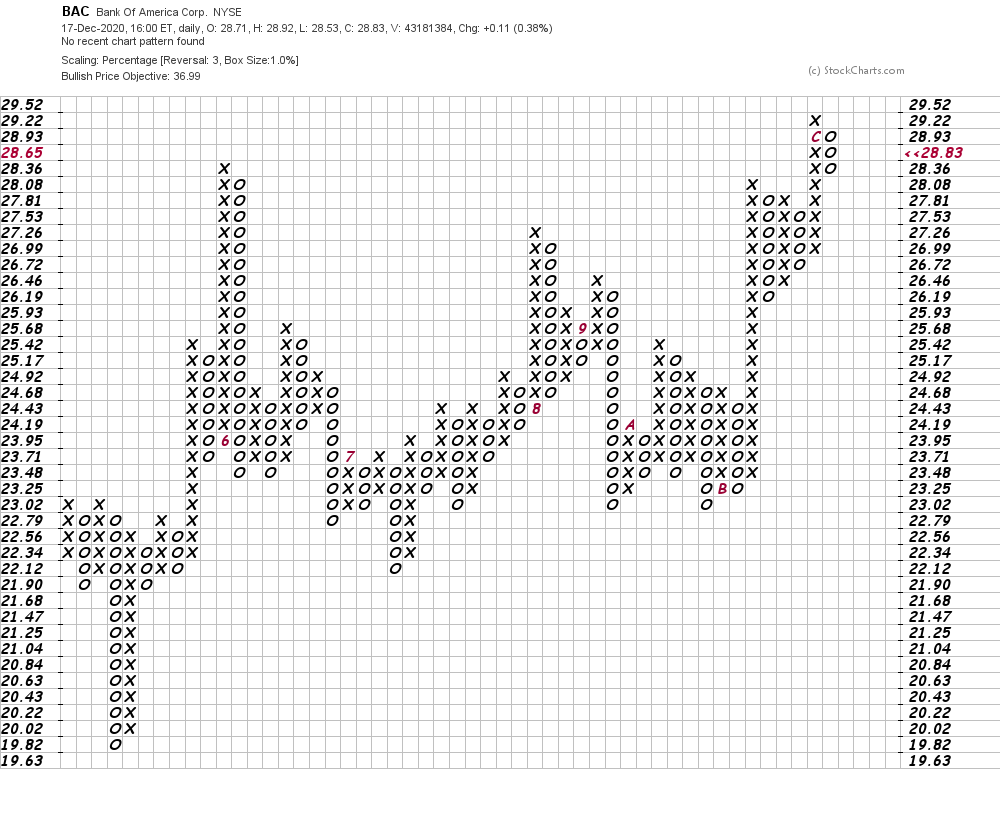 Bottom-line strategy: For the short-run I would expect to see some further sideways movement for BAC but an upside breakout could be seen in the first quarter of 2021. Before we see a rally to $37, traders and investors will probably need to risk to $24.

Get an email alert each time I write an article for Real Money. Click the "+Follow" next to my byline to this article.
TAGS: Investing | Stocks | Technical Analysis | Banking | Diversified Financials | Financial Services | Mad Money | Executive Interview | Brokerages