The indices closed mixed Tuesday with positive internals on the NYSE and Nasdaq with higher trading volume.

All closed higher with the exceptions of the Nasdaq Composite and Nasdaq 100, which have been leading the markets for the past several months.

Of technical note, the Dow Jones Transports (see below), Russell 2000 and Value Line Arithmetic Index closed above their near-term resistance levels. The S&P MidCap 400 Index closed back above its 50-day moving average.

So, all of the charts remain in short-term uptrends and above their 50 DMAs. 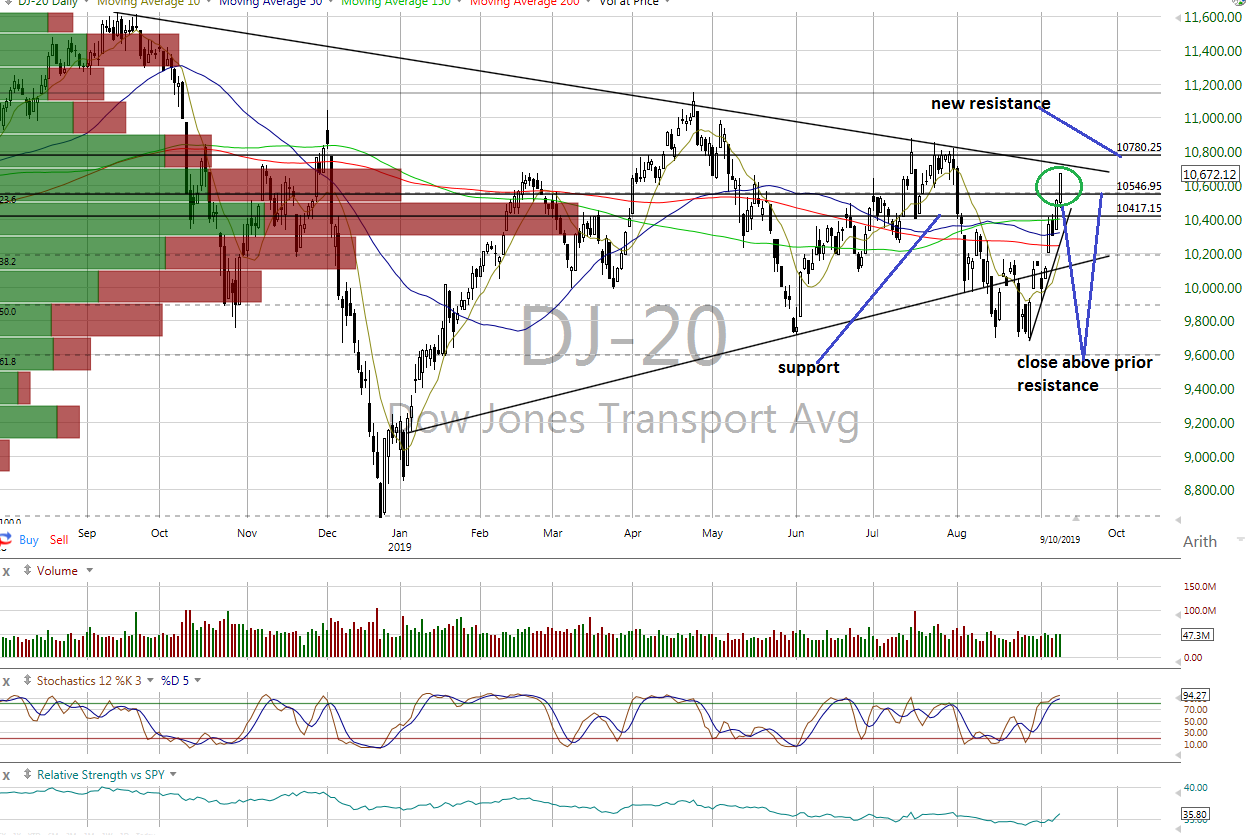 The cumulative advance/decline lines for the All Exchange, NYSE and Nasdaq remain positive and above their 50 DMAs.

However, the other side of the scale finds all of the indices in overbought territory on their stochastic levels as a result of recent strength, suggesting retracement potential.

All of the one-day McClellan Overbought/Oversold Oscillators are deeper into overbought territory (All Exchange:+71.66 NYSE:+71.14 Nasdaq:+75.4). As such, like the stochastic readings, they imply retracement potential.

The detrended Rydex Ratio (contrary indicator) is neutral at -0.45 as is the percentage of S&P 500 stocks trading above their 50-day moving averages at 62.2.

The Investor's Intelligence Bear/Bull Ratio (contrary indicator) shifted from bearish to neutral at 18.7/44.9 .

The Open Insider Buy/Sell Ratio remains neutral but dropped to 50.9.

Valuation continues to be appealing, based on current estimates. With the 12-month forward consensus earnings estimate from Bloomberg for the S&P 500 at $171.67 per share, the forward P/E multiple is 17.4x while the "rule of twenty" finds fair value at 18.3x.

We would note, however, that earnings estimates have been declining over the past week as the markets have moved higher.

While the charts are giving generally positive signals, we believe there is enough counterbalancing evidence present to maintain our near-term "neutral" outlook for the major equity indices.

Let's take stock of who's likely to come out ahead in this winner-take-all marathon.

Let's Mine for Opportunities in Newmont Corp.

I'm not a fan of catching a falling knife, but I see some intriguing aspects on the daily view of Newmont.