After a dismal back half of the third quarter, stocks had their best two-day performance since April 2020 to start the fourth quarter. This is the third best start for equities in a fourth quarter since 1930.

So, what triggered this huge rebound, other than an overdue bounce?

Was a peace deal reached in Ukraine? Unfortunately not, but détente seems to have been reached between Elon Musk and the management of Twitter (TWTR) in regard to Musk's takeover of the social media concern.

Did new economic readings show that inflation levels are falling like a rock?

Did earnings estimates get raised for the upcoming earnings season?

Was there a huge merger that reignited the "animal spirits" in the M&A market?

The answer is none of these things happened. However, increasing investor hopes for a pivot from the Federal Reserve around their current monetary regime seem to be the driving force for the huge rise we have seen to start trading here in the fourth quarter.

A major factor in Tuesday's rise was data from the August BOLTs report that showed job openings fell by a shocking 1.145 million from the previous month. This was one million more than the consensus. August Construction Spending also fell more than expected. Hardly surprising given average mortgage rates have roughly doubled here in 2022.

These data points boosted hopes that the Fed will soon be forced to curb their aggressive monetary policy, despite commentary from several Federal Reserve Governors this week to the contrary. How this plays out in actuality is anybody's guess at the moment.

There is one certainty in this uncertain environment, however. And that is that central bank policy will be the dominant theme for the market throughout the rest of 2022. I expect more of these "bad news is good news" trading days in the months ahead. 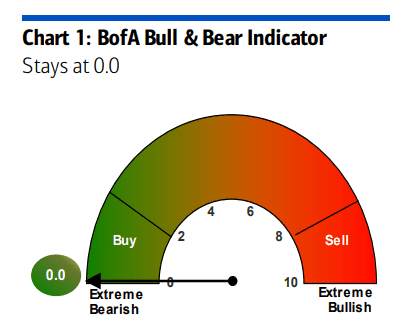 Diverging from the Gloomy Gus routine for a moment, there are actually some encouraging signs for investors. For the contrarian investor, the Goldman Sachs' Sentiment Indicator just came in negative for a near-record 31st-straight week. Outside of a significant credit event, that does point to an oversold market.

In addition, commodity prices have come down noticeably over the past few months -- a positive sign for inflation and input cost pressures. Europe also seems to have done a commendable job filling up their natural gas storage capacity in front of the upcoming winter, albeit at great costs.

And that brings us to an investable idea. Moderating supply-chain issues is good news for the likes of CalAmp (CAMP)  . I have added to my holdings in this stock recently.

CalAmp designs and builds telematics products and offers cloud-based application enablement and telematics service platforms as well. The company is best known for its LoJack business.

CalAmp has been substantially impacted by supply-chain challenges for its last couple of quarters. These pressures now seem to be receding. In addition, insiders were heavy buyers of CAMP shares in the third quarter, which is always a nice vote of confidence.

So, while I don't believe this is the start of a sustainable rally, it is nice to see the fourth quarter off to a good start in what has been a dismal 2022 for investors to date.

(Please note that due to factors including low market capitalization and/or insufficient public float, we consider CAMP to be a small-cap stock. You should be aware that such stocks are subject to more risk than stocks of larger companies, including greater volatility, lower liquidity and less publicly available information, and that postings such as this one can have an effect on their stock prices.)

Get an email alert each time I write an article for Real Money. Click the "+Follow" next to my byline to this article.
TAGS: Economic Data | Economy | Federal Reserve | Fundamental Analysis | Investing | Markets | Small Cap | Stocks | Trading