The S&P 500 and Nasdaq had their worst day in just over a week. But, at least we are working off the overbought condition in the market. The excess we got last week is getting cut down.

But does it turn or change the indicators? That is always the question.

One indicator, the number of stocks making new lows, has changed. The new lows on the New York Stock Exchange, while not as small as they should be, are not yet expanding to a great extent. But over on Nasdaq that is not the case. Tuesday saw 70 stocks make new lows. That's a lot when you consider the index is at an all time high, or just off it. More so, the 10-day moving average ticked up on Tuesday. 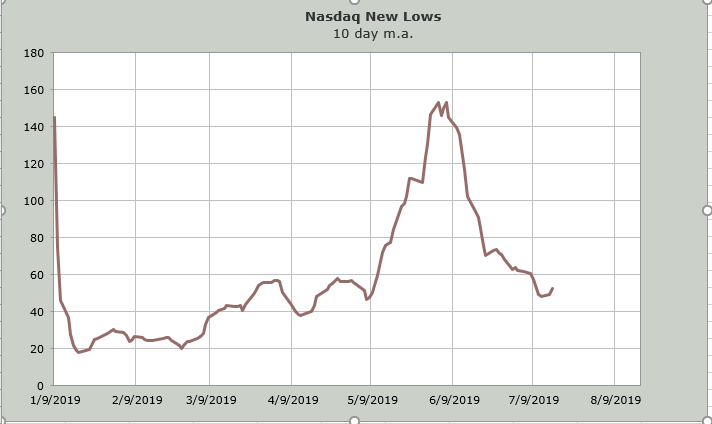 Now consider that there were 107 new highs for Nasdaq on Tuesday. That means with the index at all- time high, we saw only 37 more new highs than new lows. What do you think the chances are that you pick the winners and not the losers when it comes to those statistics? The odds were much better a month ago.

It has been nearly a month since the number of stocks making new highs on the NYSE peaked. On June 21, we saw 323 new highs. Tuesday saw 140. My math says that's fewer than half as many. This indicator is showing contraction, not expansion. Oh sure, you might say that's because the utilities have stopped going up. The staples have stopped rising. All those bond proxies have stopped going up, too. But that is rationalizing an indicator, something I prefer not to do. Either stocks are making new highs or they are not.

Nasdaq, where we don't have all those bond proxies, saw the new highs peak at 217 on June 21. Here, too, there are fewer than half of that number on Tuesday at 107.

The total breadth of the market is actually fine. The S&P lost 10 points on Tuesday and breadth was flat. It could easily have been much worse than that, especially when you consider the oils and most banks got hit hard.

The McClellan Summation Index keeps heading up as well. It now needs a net differential of -100 advancers, minus decliners, to halt the rise so its cushion isn't terribly solid. But it would then require more weakness than that to roll over. Typically we'll see this indicator show weakness before the major indexes peak.

Finally, the Investors Intelligence bulls skipped up to 58%. This is the highest reading we've seen in this survey since the October high when they got to 61%. It is now possible we see 60% next week. Well that's if we don't fall apart before the end of the week.

The real change is the bears. They have hovered at 18% for weeks, no matter how much the bulls climbed the bears seemed to never drop off. This week they fell to 16%, the lowest reading since January 2018. Let me point out that the bears were at 12% January 2018, so I'll call 16% a change, but not dramatic.

For now, we're still at the point where we got overbought and sentiment got extreme and thus far we're working it off. The indicators haven't yet rolled over so we'll keep an eye on it. I continue to expect we'll see some volatility come our way.

Get an email alert each time I write an article for Real Money. Click the "+Follow" next to my byline to this article.
TAGS: Investing | Stocks | Technical Analysis | Utilities |

INGR is a proven winner now at just 12-times earnings.

Jim Cramer: 4 Stocks That Are the Wild Bunch

Do these four make sense? The answer, surprisingly, is very much so if they continue to execute as well as they have.

Did You Hear That? It's Called Volume. Let's Discuss It.

Last week total volume for Nasdaq has fallen off, with Friday the lowest volume day in nearly three months -- even more curious is that the New York Stock Exchange saw no such drop off.