Walt Disney Co. (DIS) reported third-quarter numbers that missed on earnings and revenue. Disney shares were down more than 4% in trading before Wednesday's opening bell, so a fresh look at the charts seems like a good idea for this stock, which is a holding of Jim Cramer's Action Alerts PLUS charitable trust. Plus, Disney is the Stock of the Day at Real Money.

In this daily bar chart of DIS, below, we can see that prices broke below the rising 50-day moving average line and then rebounded back above it. Prices are likely to close back below the line here on Wednesday. The rising 200-day moving average line is well below the price action. The volume of trading looks like it has declined from April, which is not a bullish picture as technical analysts like to see volume expand in the direction of the trend.

The daily On-Balance-Volume (OBV) line does show a rise from late March but may have peaked in late July. The 12-day price momentum study in the lower panel shows lower momentum highs from April to June to July while prices made higher highs. This difference in movement between price and the indicator is called a bearish divergence and tells us that the rally was slowing, which at times can foreshadow a reversal.

In this weekly bar chart of DIS, below, we can see that some weakness developed since the last time we inspected it. Yes, prices are above the rising 40-week moving average line, but the weekly OBV line has not confirmed the rally and the Moving Average Convergence Divergence (MACD) oscillator is poised to cross to the downside for a take profits sell signal (or a sell when the stock is in an uptrend).

In this Point and Figure chart of DIS, below, we can see that a downside price target of $129 was projected before Wednesday's expected lower opening. A trade at $128.71 could precipitate further declines, however, as it would break the bottom of a support area. 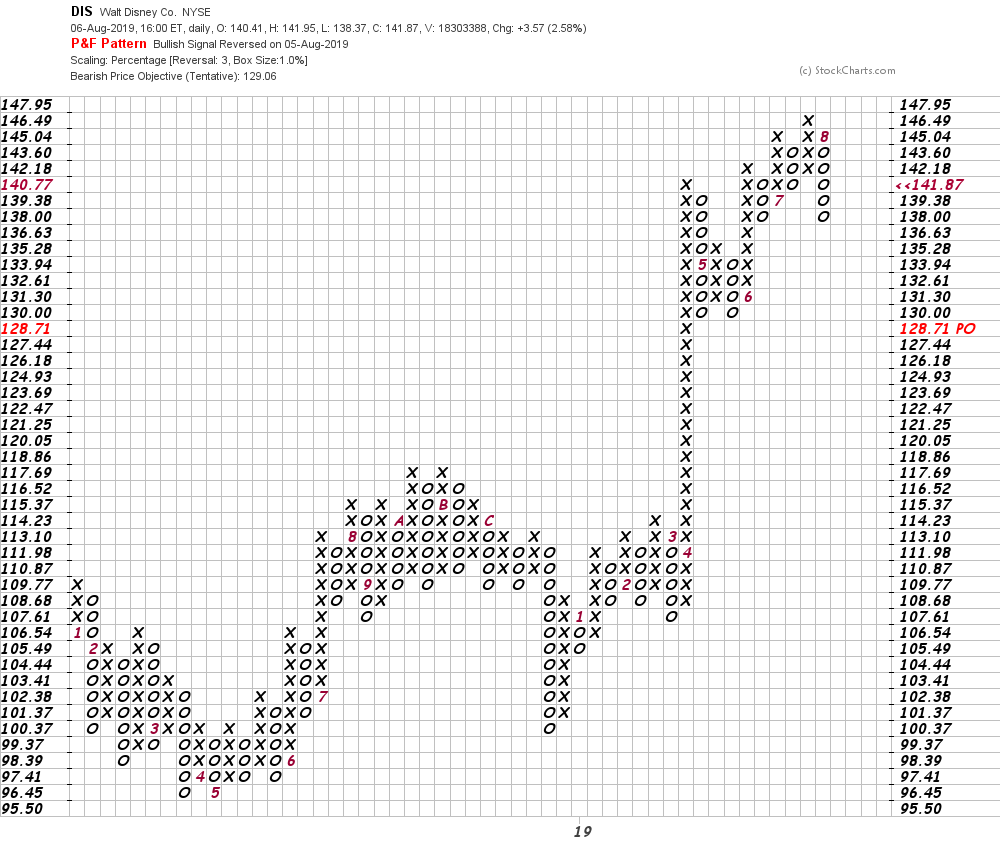 Bottom line strategy: The problem with the disappointing earnings numbers from DIS is that it was announced in a weak broad market. The reaction from the marketplace could be amplified, and below $130 the chart does not show support until the $115 area. Avoid.

Get an email alert each time I write an article for Real Money. Click the "+Follow" next to my byline to this article.
TAGS: Investing | Stocks | Technical Analysis | Consumer | Digital Entertainment | Movie Production | Movies | Resorts and Hotels | Television Production/Distribution | Real Money | Consumer Discretionary | Stock of the Day