Bed Bath & Beyond Inc. (BBBY)  was down more than 10% in the pre-market trading Thursday after the housewares retailer reported a surprise third-quarter loss and scrapped its full-year profit guidance. New CEO Mark Tritton says the loss was "unsatisfactory" and he cautioned that the path to profitability for Bed Bath & Beyond "will not be linear."

Let's check out the charts and indicators before the opening for Bed Bath & Beyond, which is the Stock of the Day at Real Money.
In this daily bar chart of BBBY, below, we can see a weakening technical picture heading into Thursday. Prices have been in an uptrend from the middle of August but the daily On-Balance-Volume (OBV) line has been flat since October, telling us that buyers have not become more aggressive. Trading volume has diminished from October and that is not what chart watchers want to see in an uptrend. Volume should be increasing if the story is solid. The 12-day price momentum study shows lower highs from October to December despite prices making higher highs. This is a bearish divergence and tells us that the pace of the rally is slowing and that can foreshadow a correction.

In this weekly bar chart of BBBY, below, we can see that prices suffered a long decline into August 2019. Prices improved and rallied above the bottoming 40-week moving average line, but we are now likely to see a potential retest of the 2019 nadir. The weekly OBV line shows a rise from August so we know there was some aggressive buying in recent months. The buying could have been short covering so a decline may be cushioned, but if the buying represented new longs we could see a deeper reaction in the weeks ahead. The Moving Average Convergence Divergence (MACD) oscillator is above the zero line in positive territory but the indicator has begun to narrow, so we could see a bearish crossover to the downside in the near future.

In this daily Point and Figure chart of BBBY, below, we can see that a nearby upside price target was projected before Thursday's pre-market weakness. A trade at $15.77 or lower should weaken this chart. 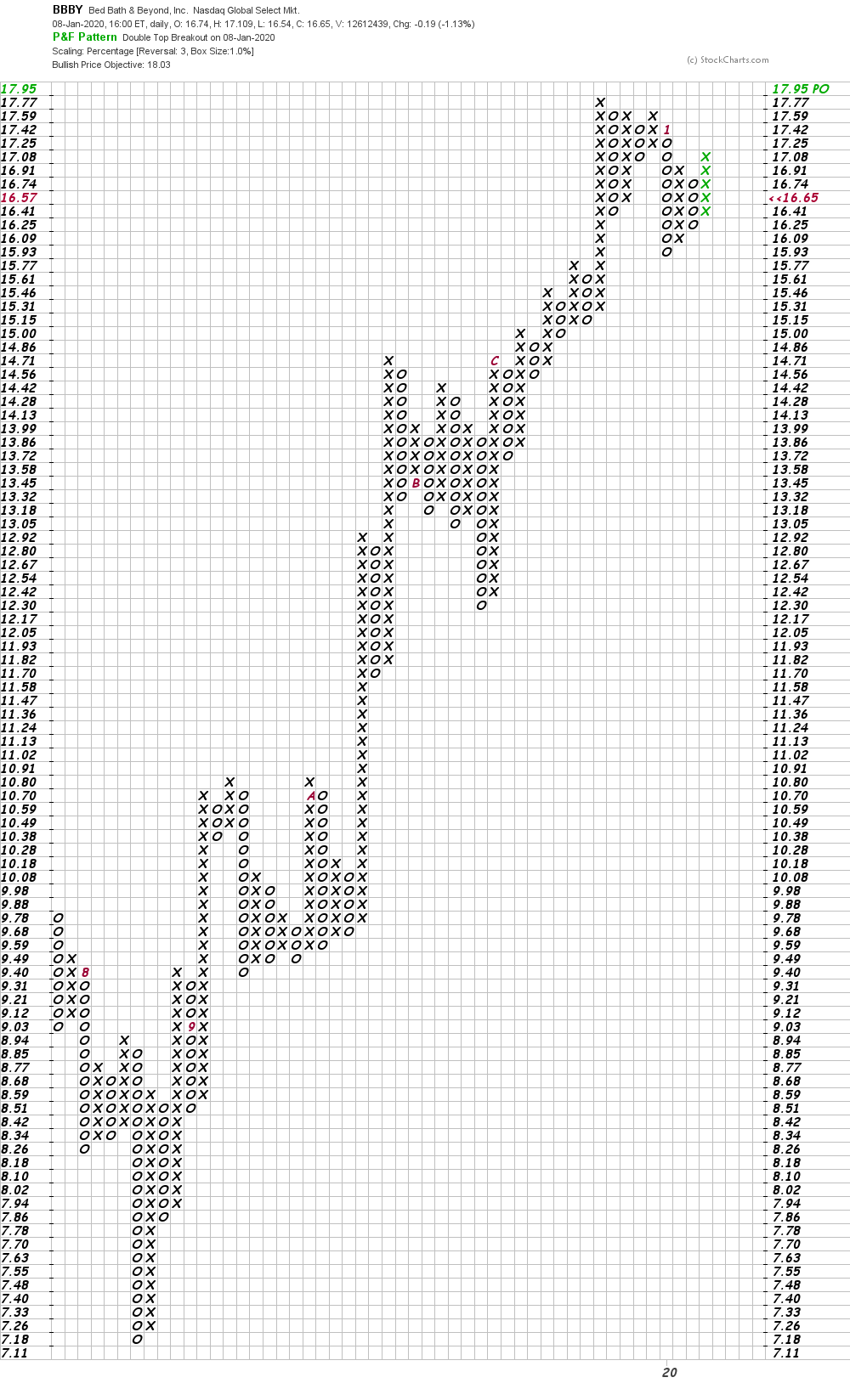 Bottom line strategy: BBBY might pull back to just 15 or it could retest its November low. I am not sure what sort of decline will develop, so I recommend being flat BBBY until we see what develops.
Get an email alert each time I write an article for Real Money. Click the "+Follow" next to my byline to this article.
TAGS: Earnings | Investing | Stocks | Technical Analysis | Consumer | Household Products | Retail | Real Money | Stock of the Day