AutoNation, Inc.  (AN) is due to report its latest earning's numbers on Friday, Feb. 22. Prices have been showing some modest price strength the past two months but I don't know if that is foreshadowing good numbers and further price strength or if investors and traders may be disappointed.

Let's kick the tires of the charts and indicators a bit on the stock discussed by Jim Cramer on his Mad Money program last week.

The volume pattern is interesting in that volume was heavy in October but nothing to write home about in December. At market bottoms it is not unusual to see heavier volume as some longs are dumping shares while others are happily buying shares. The daily On-Balance-Volume (OBV) line declined with the price action from June to December. The rise in the OBV line from December is not all that strong. Buyers of AN have turned a little more aggressive but, again, nothing to write home about.

The trend-following Moving Average Convergence Divergence (MACD) oscillator crossed to the upside in December for a cover shorts buy signal and an outright go long signal in early January. The MACD oscillator is still above the zero line but it is trying to make up its mind on its next move.

In the weekly bar chart of AN, below, we can see a mixed picture. Prices are below the declining 40-week moving average line so the longer-term trend is down. The weekly OBV line shows a decline from January of 2018 suggesting that liquidation (selling) has been going on for a long time.

The MACD oscillator on this longer time frame has only signaled a cover shorts buy in early January. This indicator is still well below the zero line and an outright buy signal.

In this Point and Figure chart of AN, below, we can see a couple of signals. Prices have broken a downtrend line going back to August 2018 (look for the "8" on the chart). An upside price target of $47.03 is being projected but we also can see that a trade at $39.78 is needed to be a triple-top breakout and refresh the uptrend. 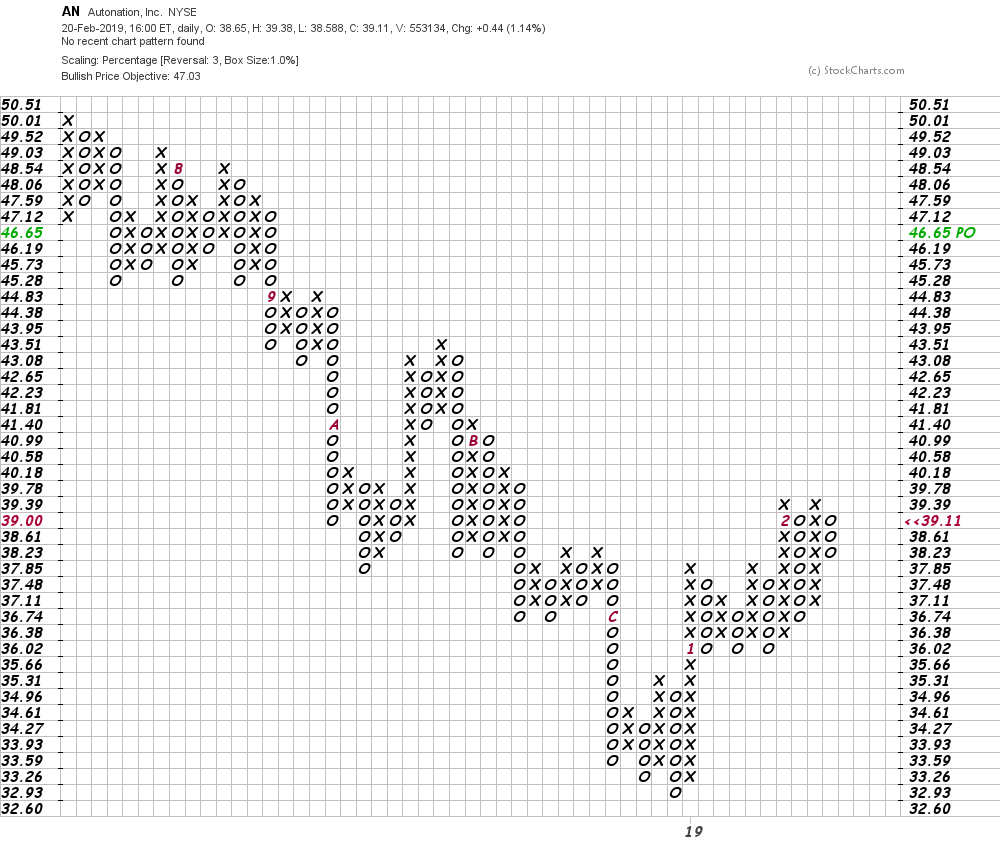 Bottom-line strategy: Our Point and Figure chart is giving us an upside price target but the charting technique ignores volume so I am taking it with a grain of salt as they say. I have no strong bias ahead of earnings and would suggest standing aside for now.

Get an email alert each time I write an article for Real Money. Click the "+Follow" next to my byline to this article.
TAGS: Earnings | Investing | Stocks | Technical Analysis | Automotive | Retail