By TIMOTHY COLLINS Oct 28, 2019 | 01:12 PM EDT
I've been married for close to two decades. During that time, my wife and I have moved more times than I care to admit. Our most recent home is a downsize in indoor space, in exchange for more outdoor living. We had been constantly expanding, so moving into a smaller home reminded me of something I had always knew, but constantly ignored: Over the years, we accumulated a lot of crap.
In a nutshell, that's AT&T. Through growth and acquisition, AT&T accumulated a lot of different assets. Now, the company has come to the same conclusion as I have. It's time to dump unneeded stuff.
In my case, it is things living in boxes. For AT&T, the company will look to monetize non-strategic assets. And that process has begun for the company. On Friday, it agreed to a sale-leaseback with Peppertree Capital Management in which AT&T would sell more than 1,000 AT&T towers for up to $680 million, then lease them back from Peppertree.
This morning, along with earnings to start the week, the company announced it would sell its majority stake in Central European Media Enterprises for $1.1 billion in cash and relief from a $575 million debt guarantee. While the combination of these deals amounts to less than 1% of AT&T's market cap, it will begin to make a dent in the company's large debt. At least, that's the plan.
AT&T basically produced inline results for the quarter. Based on the full-year guidance of $3.60 to $3.70 vs. estimates of $3.62, the fourth quarter earnings per share should come in slightly better than expectations on revenue growth of 1% to 2%.
Management expects stable cash flow of $28 billion with the dividend payout ratio in the low 50% area. By 2022, AT&T is looking at modest annual dividend growth with the payout ratio to drop below 50%. It would then use 50% to 70% of the after-dividend-free cash flow to buy back shares with a portion of the remaining cash flow to pay down the debt it accumulated buying Time Warner. We should anticipate non-strategic asset sales to also go toward debt reduction.
Maybe most important, AT&T stated it would not be buyers, only sellers, so if you hold a position with the thought AT&T will acquire it, you can remove that thesis until at least 2022. 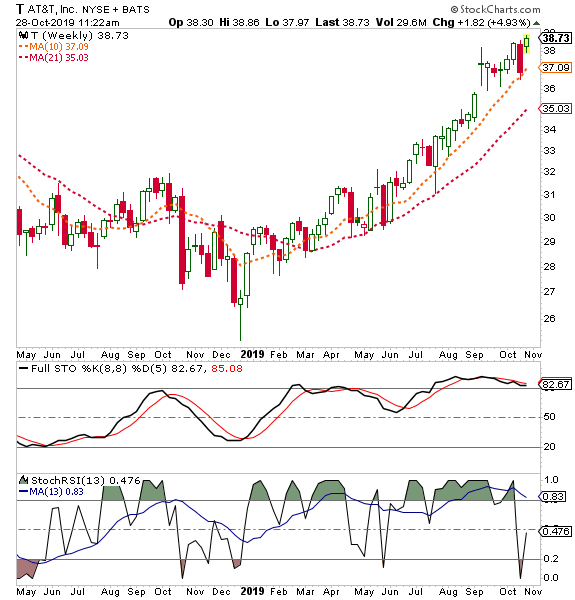 The long-term weekly price action looks pretty darn good for AT&T bulls. Rather than having to draw on support lines, the simple-moving averages have done it for me. The 10-week simple moving average is the first line of support with the 21-week SMA as the second line of support. I would look to use the 10-week SMA as a possible area to buy puts against the stock while the 21-week SMA may make for better dip buying. That gives us support of $37 and $35. Another consideration here is to sell a November or December $37-$35 put spread (short the higher strike, long the lower strike) with the thesis that if $37 fails to hold, $35 should create a bounce. Overall, I wouldn't be bearish, until the stock closes below the 21-week SMA. Until that time, we can call this one bullish, pun intended.
Get an email alert each time I write an article for Real Money. Click the "+Follow" next to my byline to this article.
TAGS: Earnings | Investing | Options | Stocks | Telecommunications | Telecom Services | Stock of the Day