Chart trends for the major equity indices remain mostly bullish. However, investor sentiment remains near peak levels of bullish expectations while valuation still suggests the markets are richly valued, both of which imply high levels of potential risk exist. As such, we perceive risk/reward to be tenuous.

All the major equity indices closed higher last Thursday with positive internals on the NYSE while the Nasdaq saw negative breadth with light trading volumes on both. 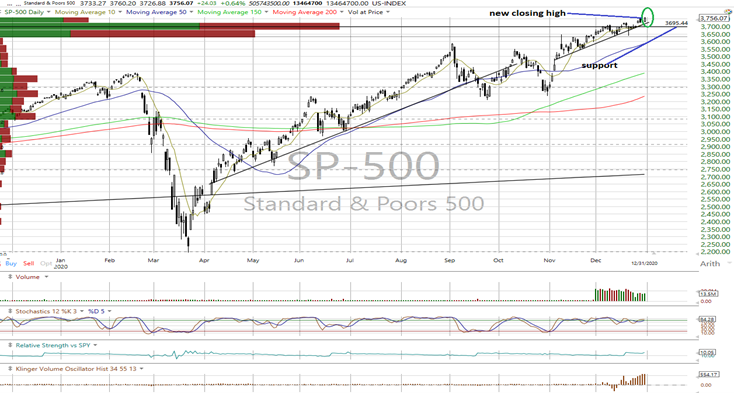 Regarding trend, all remain bullish except the Dow Jones Transports and Russell 2000, which are neutral.

Cumulative breadth turned positive from neutral for the All Exchange as is the NYSE. However, the Nasdaq cumulative A/D remains neutral.

As we have yet to see any important sell signals generated, the chart structures remain generally bullish.

In contrast to the charts, the data are still sending some cautionary signals.

The Open Insider Buy/Sell Ratio is neutral at 32.2 on a slight uptick but has been in a cautionary mode through most of the rally.

However, the detrended Rydex Ratio (contrarian indicator) remains in bearish territory as the leveraged long ETF traders continue their leveraged long exposure at a bearish 1.17.

Last week's Investors Intelligence Bear/Bull Ratio (contrary indicator) was unchanged at a bearish 17.2/63.6 and at peak levels seen over the past decade while the AAII Bear/Bull Ratio saw little change at 25.05/45.02 and remains near peak levels as well.

As a whole, the sentiment indicators suggest a high level of complacency exists.

The forward 12-month consensus earnings estimate from Bloomberg of $158.43 per share for the S&P 500 has stretched its valuation to a forward P/E multiple of 23.7x while the "rule of 20" still finds fair value of 19.1x.

The combination of extended valuation and investor bullish sentiment remain our primary concerns.

The chart/data debate still suggest a "neutral" near-term outlook is appropriate as the potential for downside risk is present, in our opinion.