The question of the day is this: If we keep sliding into the election, how can this not be a repeat of 2016? After all, won't we be grossly oversold? Won't sentiment be over-the-top bearish?

Sure, that is all true. In fact, we are getting grossly oversold. My own Oscillator is oversold.

The McClellan Summation Index now needs a net differential of positive 4,300 advancers minus decliners on the New York Stock Exchange to stop going down, which makes it extremely oversold.

On the sentiment front, I have no doubt that Thursday's American Association of Individual Investors release will shows fewer bulls and more bears than last week. Will the bulls be in the low 20s? It's doubtful, but possible. Will the National Association of Active Investment Managers' exposure be down from last week's 89%? I think it will. Will it be under 60%? It's possible.

The put/call ratio was 1.12 on Wednesday, so that's the second time this week we've seen a high reading. Finally, this is showing some bearishness creep in.

There is some good news on the sentiment front, the Daily Sentiment Index (DSI) for the S&P is at 27. So if the market slides for the next three to four trading days, then for sure that should be in the single digits, which would show a sentiment extreme and therefore be helpful to a post election rally.

The question is will we slide for several more days? We're already oversold short term.

Then there is this week's Investors Intelligence readings, which are really only tallied through last Friday, but the bulls increased to 60.6%. So let's say we slide through Friday; we can expect this will be down when next week's reading comes out. But it's hard for me to imagine it will be in the 40s (it was 41% in November 2016). 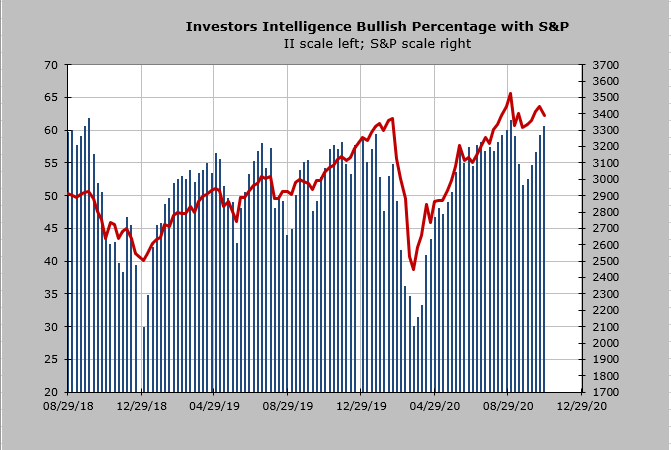 I do think it's possible we rally after the election. I do. Heck, we're so short-term oversold now, we should rally. It's that the set up in 2016 was for an intermediate-term low, one that should last weeks, if not months. That is not the case in the indicators I see now. And that's the difference.

Get an email alert each time I write an article for Real Money. Click the "+Follow" next to my byline to this article.
TAGS: Investing | Politics | Stocks | Technical Analysis | VIX |