The "Bomb Cyclone" that was slated to hit the country during the holidays seems an appropriate way to end 2022, which has brought little but bad tidings for investors.

The artic blast has also put the focus on natural gas and fuel oil. Much colder weather means much higher energy use as most of the country sees much higher heating needs.

Given this, it seems a good time to tee up a fast-growing energy producer as this weekend's covered call idea: HighPeak Energy, Inc. (HPK) . This is a name I briefly touched on earlier this month and is a recent addition to my portfolio. HighPeak and its acreage is located in the northeastern portion of the Midland Basin in Texas from where it produces oil, natural gas and natural gas liquids. 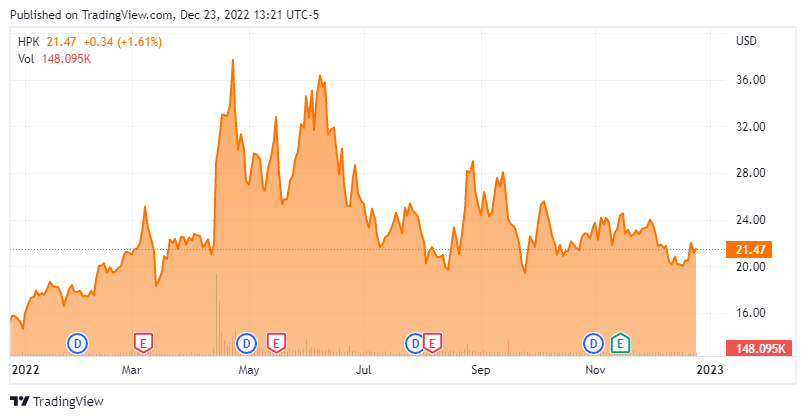 The stock has sold off over 40% from recent highs, as energy prices have come down in the back half of 2022. There is a lot to like about HighPeak at current trading levels with roughly a $2.4 billion market cap. First, over 80% of its production is crude oil and production grew by more than 200% in the third quarter as the company has benefited both by organic production growth and some strategic acquisitions. The company is also benefiting from the location of its productive acreage.

The company operates largely from two large contiguous blocks, which allows HighPeak to exploit its asset more efficiently with longer laterals and volume discounts on sand and pipe, as well as water treatment services. These blocks are also both adjacent to refineries, meaning significantly reduced gathering and transportation costs getting its output to market. HighPeak also is leveraging its locational advantage (near an electrical substation) to power its drilling rigs there with highline power (as opposed to diesel generators), saving it nearly $90,000 per well drilled. Finally, two (and soon all three) of its hydraulic fracturing -- or fracking -- crews are using wet sand through a partnership with a local mine as proppant in its wells, which will save the company around $300,000 per well drilled on transportation costs. HighPeak has drilled 86 gross wells year-to-date in 2022.

The pullback in the shares triggered nearly $1.1 million worth of insider purchases from the company's CEO this week. In November and December, the company's president also bought nearly $2 million worth of equity. Earnings should quadruple this year to over $2.35 a share on an over 200% rise in revenues. Analysts see another bump of 90% in revenues in fiscal 2023 and profits north of four bucks a share. Add in a conservatively managed balance sheet, there is not much to not like about HighPeak Energy at this valuation despite the volatility of energy prices

Options against HPK are lucrative and fairly liquid. Using the May $22.50 call strikes, fashion a covered call order with a net debit in the $18 to $18.50 a share range (net stock price -- option premium). This strategy provides downside protection of just over 15% and nearly 25% of upside potential even if this stock does little from here over the option duration.

Get an email alert each time I write an article for Real Money. Click the "+Follow" next to my byline to this article.
TAGS: Investing | Options | Stocks | Energy | Natural Gas