By STEPHEN GUILFOYLE Jul 26, 2022 | 11:27 AM EDT
Stocks quotes in this article: GE
Better than bad? How about "less bad"?
General Electric ( GE) released its second-quarter financial numbers Tuesday morning, and no matter how you slice it, the company did beat Wall Street expectations.
For the three-month period ending June 30, GE posted adjusted earnings of of $0.78 per share on revenue of $18.646B. The adjusted EPS number easily bested Wall Street consensus estimates, while the revenue print not only beat, but grew 2.15% from the year-earlier period. Interestingly, the GAAP EPS number landed at -$0.78 (how uncanny), which was a significant improvement over the loss of $1.08 per share from the comparable quarter last year.
GAAP profit margin hit the tape at -1.3%, up 440 basis points, while adjusted profit margin oriented at 9.3%, which was up 380 basis points, organically. Cash from operations for the period was $0.5B, up $0.9B, while free cash flow landed at $162M, which was down from $199M, but trounced expectations for deeply negative free cash flow for the period.

GE's press release mentions the recent branding of the three future independent companies that will become of the current company. These companies will be GE Aerospace, GE HealthCare, and GE Vernova.
GE Aerospace will own the GE trademark. GE Vernova will encompass the GE energy businesses. The company mentioned that it is planning to shortly file a confidential Form 10, has submitted a request for an IRS private letter ruling, has completed consultation with the European Works Council, and announced that GE HealthCare will list at the Nasdaq Market Site under the symbol "GEHC."

GE ended the period with a net cash position of $19.935B, which is down over six months, inventories of $17.553B, which is up over six months, and current assets of $60.658B, which is down over six months due to the reduced cash levels. Current liabilities amount to $53.883B, including $4.947B in short-term borrowings.
This leaves the company with a current ratio of 1.13, which is fine. However, the current ratio is down semi-significantly from 1.28 six months ago. This deterioration in the quality of the balance sheet's "current" situation needs to be watched.
The company's quick ratio of 0.8 leaves a little something to be desired. GE is not a retailer, so quick ratios can matter, even if I understand that in times like this, firms may need to bloat inventory levels. Six months ago, GE's quick ratio stood at 0.97. That's some rapid erosion of quality right there.
Total assets add up to $185.54B. This includes entries for "goodwill" and other intangibles of $33.816B. Though a large number, at 18% of total assets, I don't see this as abusive. Total liabilities less equity comes to $149.597B, including $27.571B in long-term borrowings. I don't love the cash to debt ratio. GE can pay their bills and service their debt for now.
My opinion is that the company does need to improve on a balance sheet that has been moving in the wrong direction this year.

For the most part, GE backed up its full-year 2022 guidance that was first published in January -- with one key exception. From the press release: "GE continues to trend toward the low end of its 2022 outlook on all metrics except free cash flow. Working capital will be pressured as GE protects customers from the impact of supply chain challenges, as well as Renewable-Energy related orders, which together are likely to push out approximately $1B of free cash flow into the future."
Last month, the company guided full-year adjusted EPS toward a range of $2.80 to $3.50. Carving out roughly $1B from this fiscal year's expected cash flow would leave the expectation in between $4.5B and $5.5B. Right now, such a target appears to be quite aggressive.
CEO and Chairman (and CEO of GE Aerospace) Larry Culp was quoted: "We are improving delivery, price, and cost performance via lean and decentralization. Notwithstanding this progress, much is still uncertain about the external pressures companies are facing at this moment. We continue to trend toward the low end of our 2022 outlook on all metrics except cash, which is lower due to timing of working capital and Renewable-Energy related order. We're building meaningfully stronger businesses as we focus on serving our customers and investing through these constraints. We are on track and confident in our plans to form three independent companies positioned to create long-term value."

The business does seem to be improving. Still, these results, especially from a GAAP perspective, are not exactly what I would call desirable. If you've read this far, then you know that I have concerns regarding the direction of the balance sheet. I think the future looks bright... for GE Aerospace. What's not to like about 18% profit margins? Plus GE Aerospace gets to keep both Larry Culp and the GE trademark, which can then be licensed to the other two spin-outs.
I don't think I want to invest in the firm as a whole, however. GE HealthCare does look like a real business. Not a growing business, but a business nonetheless. As for GE Vernova? No thank you. 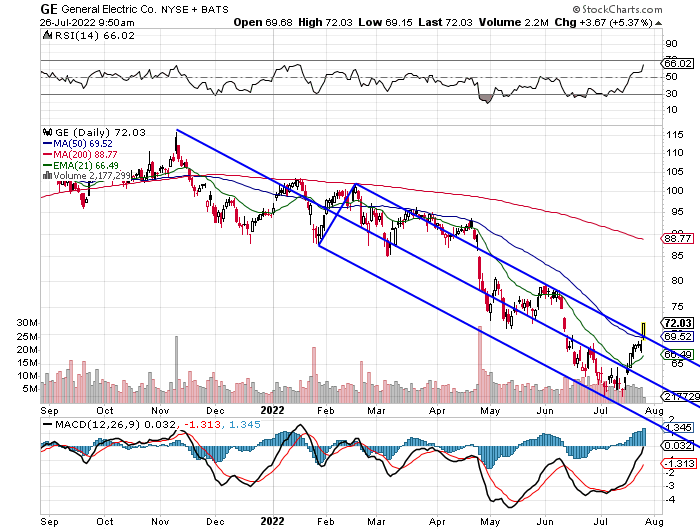 There was nothing in Tuesday's report that got me very excited. However, the rest of Wall Street appears to think differently. The stock has broken out of its downward-sloping Pitchfork model for the first time since late mid-April and has retaken its 50-day simple moving average (SMA).
If the shares can hold that 50-day line, then the bulls may just have a ballgame. Both relative strength and the daily Moving Average Convergence Divergence (MACD) appear a bit extended, but not enough so to ruin Tuesday's fun just yet.
Personally, I would rather go out three weeks and sell GE August 19 $67 puts for a buck than purchase the equity today, but that's just me. I've already told you a few things that I am not crazy about with this name.
No options account? Might be a decent idea to wait and see if this stock adds a handle to this forming cup.
Get an email alert each time I write an article for Real Money. Click the "+Follow" next to my byline to this article.
TAGS: Earnings | Fundamental Analysis | Investing | Options | Stocks | Trading | U.S. Equity