How's it looking out there now?

All but two of the index charts suffered some form of technical damage Thursday, including several changes in near-term trends. However, the data is now offering some possible near-term encouragement. Indeed, insider buying saw a notable pickup in activity as the crowd rushed for the door.

As we have been discussing over the past several sessions, the narrowing of the number of issues being able to gain ground persists. However, in our opinion, that does not mean upside opportunities do not exist. 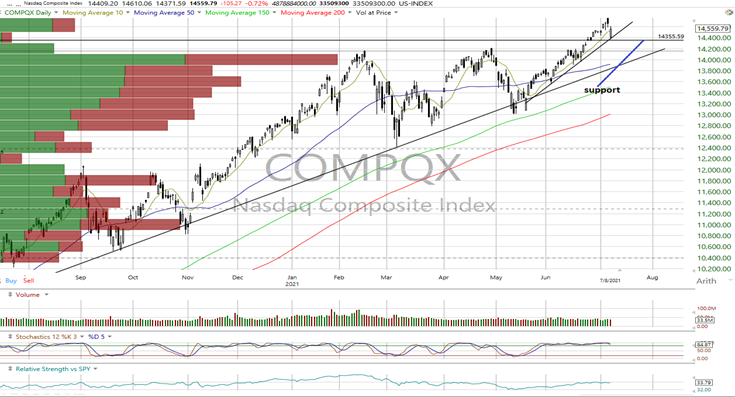 All the major equity indices closed lower Thursday with negative internals on the NYSE and Nasdaq.

The only two indices that did not see a weakening on their charts were the Nasdaq Composite (see above) and Nasdaq 100 as both closed well above their intraday lows to near their intraday highs by the close; they remain in near-term uptrends. In our opinion, this speaks again to the selectivity of the current market environment.

On the other hand, the Dow Jones Transports, MidCap 400 and Value Line Arithmetic Index closed below support levels and are now in near-term downtrends.

The S&P 500 and DJIA closed below their near-term uptrend lines and turned neutral from bullish as the DJIA also violated support.

As such the near-term trends remain bullish for the Nasdaq Composite and Nasdaq 100, neutral for the S&P 500 and DJIA with the rest negative.

Cumulative breadth was unchanged with the All -Exchange and Nasdaq A/Ds negative and the NYSE's neutral.

All the McClellan 1-Day Overbought/Oversold Oscillators are oversold and suggesting a possible pause/bounce for the markets, in our opinion (All Exchange: -76.11 NYSE: -70.12 Nasdaq: -80.52).

The Rydex Ratio (contrarian indicator), measuring the action of the leveraged ETF traders, remains bearish at 1.45 as of our last reading.

The Open Insider Buy/Sell Ratio rose to 33.0 from 28.4 as insiders decided it was time to buy some of their stock. However, it remains neutral.

The forward 12-month consensus earnings estimate for the S&P 500 from Bloomberg lifted slightly to $198.90 per share. As a result, the S&P's forward P/E multiple is 21.8x, with the "rule of 20" finding fair value at approximately18.7x.

The 10-year Treasury yield closed at 1.29%. We view support as 1.2% and resistance at 1.44%. The 10-year yield remains in a downtrend from its March peak, which we view as a positive for equities regarding the valuation gap.

We are maintaining our near-term "neutral/positive" macro-outlook given the current data setup with the caveat that selectivity is increasingly the key to performance.

Get an email alert each time I write an article for Real Money. Click the "+Follow" next to my byline to this article.
TAGS: Indexes | Investing | Markets | Stocks | Trading | U.S. Equity