For the time has come. To stand. As hordes of high-speed algorithms rob price discovery of all that is good and pure. One must know what one is trying to do, and plan on how to get from point A to point B. Avoiding the noise. The noise of those trying to force inefficiency into a marketplace at the expense of others. One must know where to be, and when not to be. So, be it. For today is the day that has been bestowed upon us from above. For today, is the day that, win or lose, or for good or bad, we go in and out like champions. For today, we rock.

They line up every morning. It seems they listen as the old one prays for those he loves and for the welfare of all who suffer in any way. Strange. Maybe not so strange. US stock markets fell for a second straight day on Thursday. Yes. Yes! This is what we have been looking for. This is what I have been trying to explain. For the S&P 500 reached out and kissed its own 21-day exponential moving average (EMA), only to be slapped across its face. Nasdaq Composite? Russell 2000? Same story, my faithful legions.

We asked for markets to sputter just a bit after the Monday and Tuesday run. Now, we have seen the major indexes retrace most, but not all, of Tuesday. Good. Now, we know that shorts that were "squeezable" earlier this week have been rung out like a wet washcloth. Traders and investors obviously got to a point where there was some hunkering down with set positions and stagnant cash levels going into Friday's September Jobs data.

From here, we move toward next week's September print for the Consumer Price Index (CPI). From here, we move toward yet another earnings season even as baseball season withers and dies. From here, we learn if there is going to be any move -- any move at all -- by portfolio managers toward accumulating equity at these levels. Has there been enough carnage? Fed speakers, as a mindless, thoughtless crew driven by the inexplicable, certainly do not seem to think so.

Still, the chart says that this is where we look for a potential change in trend. So, we look. We seek where others do not dare. For if Monday is day one of an attempted change in market trends, then today, Jobs Day Friday, is Day Five. Three doves, messengers from above, carry my words to whom I bend knee. Carry my words. I seek victory in a deserted landscape. I seek to protect and defend the meek and those who cannot defend themselves. I seek purity.

It was what we had asked for. The sideway to somewhat lower price discovery was perfect. No telling what Jobs Day brings. This whole attempted change in trend thing could blow up right here, which is why we only wade back in ahead of confirmation. We fear not possibly missing out on gaining large exposure precisely at market bottoms. For if there is a change in trend, momentum is a gift that bears delicious fruit. For even if only a tradeable bottom is set temporarily, then trade we will. It still pays the bills. It is only utter collapse that works against us, which is why we only go in up to our knees until we are more sure of what lurks beneath the waves.

The S&P 500 surrendered 1.02% on Thursday, the Nasdaq Composite 0.68%, the Russell 2000 just 0.58%. A gust of wind blew strength back into the US dollar, while sapping US Treasuries of their fury. The US 10-Year Note gave up six basis points on Thursday, going out at a yield of 3.82%. That yield is down from more than 4% last week, but up from a low of 3.56% earlier this week. On Thursday, 10 of the 11 S&P sector-select SPDR ETFs shaded red, with defensive sectors leading the way lower as they have often of late. Energy (XLE) , your only winner for the session, was up 1.78%, as has been the case for a week, and ran the table as far as sectors are concerned.

Trading volume was very light on Thursday, which was almost surprising, especially when one considers that many market participants were off from work for a religious holiday on Wednesday. Losers beat winners by more than 2 to 1 at the New York Stock Exchange and by a rough 3 to 2 at the Nasdaq Market Site. Advancing volume took minority shares of composite trading for names listed at both of New York's major exchanges.

Thursday brought about some more mindless, and yes, arrogant ramblings from our Fed officials. Understand this. It is far better to be "data dependent" than to just say that you are and then take stands on policy going far out into the future when you cannot possibly know just how much damage is already in the pipeline, just from the policy changes already implemented. It's OK to say that "you don't know, but that you are flexible in a changing environment."

I think a good many Fed officials have sounded quite foolish, especially of late. They have sounded sure of themselves when, given their track record, such confidence would clearly be inappropriate. Here are some of Thursday's gems...

"Said the man who never had a problem warping the nature of capitalism before."

"Although most forecasts see considerable progress on inflation in coming years, it is important to consider whether inflation dynamics may have changed in a persistent way, making our forecasts even more uncertain."

"So, you're saying that you don't trust most inflation forecasts, and even your own seem uncertain. Hence, this is a good time to remain overtly aggressive, throwing all caution to the wind?"

"We currently do not face a trade-off between our employment objective and our inflation objective, so monetary policy can and must be used aggressively to bring down inflation."

"This guy knows that the real economy lags monetary policy by a minimum of nine months, right? Pretty sure that's Economics 101."

On Thursday evening, longtime Sarge name Advanced Micro Devices (AMD) pre-announced some third-quarter results that appear to have badly missed the street's expectations. AMD does not actually report until Nov. 1. AMD indicates its third-quarter revenue will print closer to $5.6 billion than the $6.7 billion or so that Wall Street was looking for. It also let us know that gross margin would miss, likely coming at around 50%. AMD had previously guided us toward 54%.

Most of AMD is doing OK. The data center, which is a primary reason for being in the name, will show year-over year-growth and produce results in line with projections. So will Gaming. So will Embedded. The problem child for AMD this quarter was the Client segment, which will obviously produce much softer-than-expected results. AMD blames the weak PC market and inventory correction actions being taken up and down the semiconductor supply chain.

I see the stock trading almost 6% lower overnight. This is one of only two semiconductor stocks that I hung onto throughout the collapse of technology stocks earlier this year. The other is Marvell Technology (MRVL) . I still hold 25% of what my full position in AMD was last November, which is when AMD and the size of my holdings both apexed. I do not intend to take my position in terms of shares any lower at this time. I instead look to add probably 33% to my current holdings (in terms of shares, not in dollars or weighting) at some point between this morning's expected beat-down and Nov. 1, when CEO Lisa Su can make the media rounds and try to work her magic.

I am sure that many readers noticed the fast-track designation that has been granted by the Food and Drug Administraiton to Tirzepatide, which is Eli Lilly's (LLY) diabetes drug currently undergoing clinical testing as a treatment for obesity for those with weight-related comorbidities. The timeline for full approval of this drug in that way, if all goes well, would probably be late 2023 at the earliest and could slip into 2024. Still, this is a big deal and the stock is acting like it. 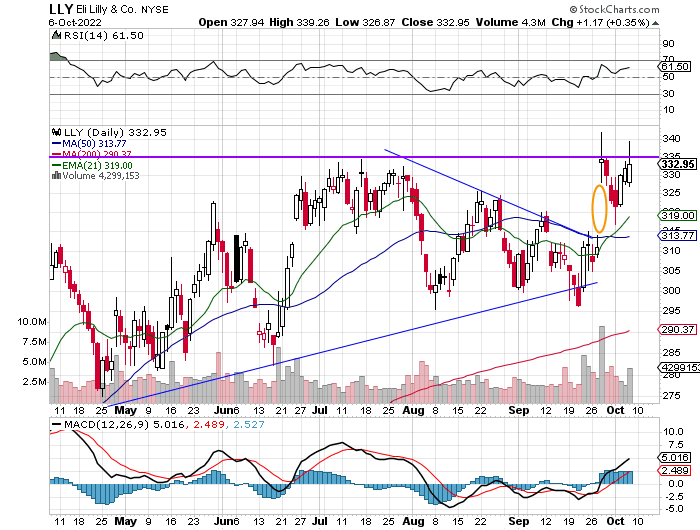 The stock broke out of a closing pennant formation in mid-September and made a second attempt at taking out the July high in two weeks' time on Thursday despite overall market weakness. Relative strength is neutral to slightly better than neutral, while the daily moving average convergence divergence (MACD) appears to be in great shape. The stock remains above all three key moving averages (21-day EMA, 50-day SMA, 200-day SMA) and all three of those moving averages are trending higher. This keeps portfolio managers on board. I am long this name.

(AMD and XLE are holdings of Action Alerts PLUS. Want to be alerted before the portfolio buys or sells these stocks? Learn more now.)