It was cool in "The Matrix" when it seemed as if time would stop, or at least slow, and the individual could observe, react to, and then maneuver around danger as if such things might be done to perfection.

Wednesday's markets came off as almost something of a snooze. For several days leading in, trading volumes had been accelerating, increased volatility had taken root. The VIX had spiked. Index-related Put/Call ratios displayed a discomforting imbalance.

The flow of capital had found its way out of "growthy" type industry groups. Down went Software, the Semiconductors, Hardware, the Internet and Media names. That flow moved toward the long end of the Treasuries, and into the commodity complex, forcing Energy stocks higher, forcing higher anything having to with Aluminum, Steel, Nonferrous Metals, Chemicals, and even Paper.

Happen to look into the ISM surveys this week? Sure, the headline manufacturing print appeared to reflect expanding but slowing growth in the manufacturing base. Not really due to a slack in demand, though. New Orders were still red hot. Backlog of Order was not only still hot, that line item got even hotter. Happen to notice the weakest links? Inventories fell into contraction, while Customer Inventories, now in contraction for an incredible 55 months, went from icy cold to even icier and even colder.

"Just in time ordering" was such a good idea. Saved so much money. Reduced overhead, and the management of all things logistics. Such a good idea... until it wasn't. Suddenly what was once considered to be highly efficient has proven itself to be little more than mere folly. Suddenly orders must be rejected due to failure to obtain unfinished products. Suddenly some products are considered finished, if they're almost good enough, and sold at prices as if finished they were. In fact, going back to that ISM Manufacturing Index one more time, prices are the fastest-growing line item on the whole sheet -- 89.6 for a metric where 50.0 is the point of differentiation between growth and contraction.

The view from 10,000 feet was one of a market that simply took the day off on Wednesday. Sure, there were both hot spots as well as cold. Investors showed more interest in 259% earnings growth at Caesars Entertainment (CZR) than they did in the company's less-than-anemic profitability.

Investors also showed more interest in a recall at Peloton Interactive (PTON) that could damage the company's reputation than in its coming earnings release, due tonight, which should show vast year-over-year improvement.

The fact is that away from the single stocks that have really been moving (Time to buy Amazon (AMZN) yet? Ahh, the damage caused by unfounded rumors), equity indices were stuck in the mud on Wednesday. Unlike actual quicksand that can swallow a point-man in a flash (think you know scary?), the indices acted like they were stuck in the quicksand that always seemed to be in the wrong place back in the era of black and white movies.

By the way, the Nasdaq Composite has now been in the red for four consecutive sessions. 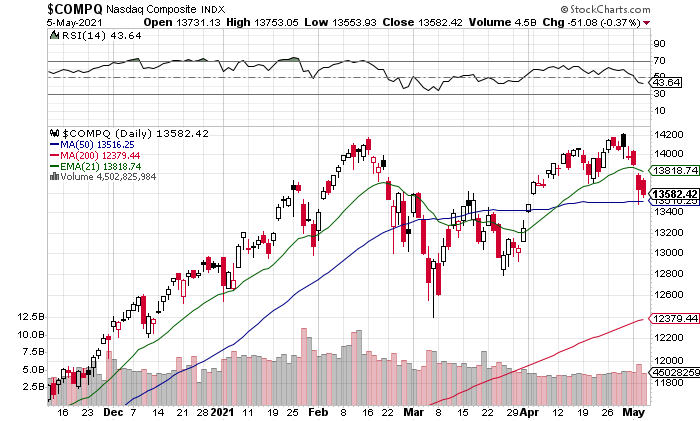 Note that the Nasdaq Composite has now made a two-day habit of clinging to its 50-day simple moving average (SMA) for support, after the 21-day exponential moving average (EMA) broke Monday night into Tuesday morning.

Hope? Sure, seeing that 50-day line hold could go either way. One way, the gap created overnight Monday into Tuesday must fill. The other way, Relative Strength, still a rather neutral 43, might need to catch up to this week's price discovery. That said, right now the index is building a series on higher lows. Until it isn't. Right now, the trend is still your friend, if you're long, though it might not exactly feel like it.

The gap between well-funded nations and the less well funded grows in terms of vaccinating a global public against the SARS-CoV-2 virus and all of its now-many mutations that cause COVID-19 among other maladies. The WTO (World Trade Organization) has put together a proposal to waive intellectual property protection rights of those pharmaceutical and biotech firms that have successfully developed COVID-19 vaccines in order to expedite the ability of poorer nations to get jabs into arms and save lives. Clearly a noble idea.

At first, the U.S. and European Union had been against the proposal as in each case, leadership has a responsibility to protect both its own, as well as provide for future corporate incentive should the planet ever have to battle vaccine-resistant mutations of this virus or perhaps a new, completely novel virus. It's not such a crazy idea. On that note, the Biden administration has decided to back the WTO waiver proposal. Both the EU and China are also willing to negotiate.

On Wednesday and overnight into Thursday morning, many of the prominent vaccine producers such as Pfizer (PFE) , Moderna (MRNA) , BioNTech (BNTX) , and Novavax (NVAX) all saw their stock prices tumble in response. The vaccine producers argue that such a plan would be ineffective, that even if the formulas were public, it might take years to build out the infrastructure and technology required. (Then again, should not that ability be there, even if for next time?) Meanwhile, India, Bazil, and South Africa more than struggle. Could be any of us in their shoes. I am a shareholder of several vaccine makers. Even so, I definitely think that the needs of the many outweigh what is best for the few.

That said, we owe all of our nation's recent success in dealing with this virus to massive federal spending. Both the Trump administration as well as the Biden administration deserve a lot of credit. "Operation War Speed" threw a lot of expensive darts at a dartboard hoping that a few might stick, and a few did. What came after the transition in power was a vastly improved streamlining in the logistics and administration of distribution. Though they will not credit each other, I think it is clear to see that the nation could not have done what it has done without either one of them. Can't see that? You just might be partisan.

Now, next time, and don't slumber on this: Next time that there is a need for an "Operation Warp Speed," do we risk the prospect of these companies simply taking a pass, or demanding exorbitant fees upfront in order to make up for the expectation that they will be stripped of their rightful protections down the road? I don't know. I really don't know. I do know that we have to vaccinate the planet, and do so as quickly as possible. Supporting the waiver is, in my opinion, the right thing to do. Personally, my P/L is such a small sacrifice.

Have you ever seen so much media coverage of Cathie Wood's ARK Innovation ETF (ARKK) in one night. I think I saw something written about that fund appear on the homepage of every financial website that I subscribe to, and I subscribe to just about all of the important ones.

The deal is this basically: The fund is at a key spot technically, and there is real fear that if this spot cracks, what looks like a stretch of rough rapids could become a waterfall, thus infecting much of the equity marketplace.

From the aerial view, readers will see that ARKK has found support at the 38.2% retracement level of the entire trough of March 2020 through February of 2021 run for this fund. That spot is under pressure right now, having passed two prior tests in March of this year. 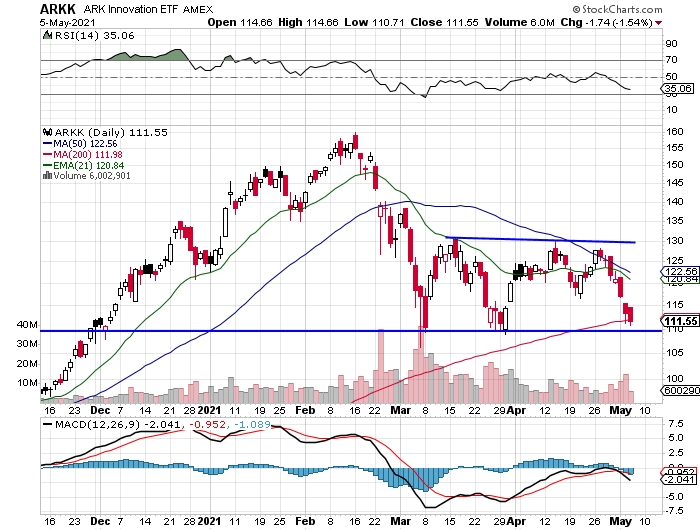 As we zoom in, readers will see that not only is long-term support under threat, but the 200-day SMA has been pierced (but, not broken) on successive days. In addition, while the daily Moving Average Convergence Divergence (MACD) is fairly ugly, Relative Strength, at 35, is weak, but may not be weak enough to force a short-term algorithmic counter-move.

The fund currently would have to rally 9.9% just to meet it's 50-day SMA, a line that ARKK traded above as recently as last Thursday, one week ago.

What if ARKK cracks the 200-day while the Nasdaq Composite (up above) cracks the 50? The investor frets.

It's up to the trader. Does the trader grab some here? This trader is not. At least not until we see necessary support materialize. I would rather pay $115 than nail the bottom. Capisce?

I just took a look at my treadmill. Mine is not a Peloton, but is a fairly decent model made by a key competitor. I see no reason that what tragically happened with the Peloton treadmill could not happen with the model I own, or with a host of other models.

This could be a broader problem for the workout-at-home industry than a company-specific issue. That said, my youngest is in his mid-twenties and my dog has no interest in the treadmill. If my kids were young, though, this news would probably make me reposition the darned thing so that the back was against a wall.

Get an email alert each time I write an article for Real Money. Click the "+Follow" next to my byline to this article.
TAGS: Earnings | ETFs | Futures | Indexes | Investing | Markets | Politics | Stocks | Trading | U.S. Equity | Coronavirus