Pins and Needles, Needles and Pins

Some might call it "thin ice." The point is that it does not take much in the way of news to drive markets one way or the other.

As the zero dark hours of Monday passed, equity markets looked to be in fine shape. Asian markets had been strong. Europe would open higher. U.S. equity index futures were being bought up. Then it happened.

What happened? China? No. Argentina? Yes. In response to a defeat in primary polling for sitting President Mauricio Macri (who has favored austere economic policy), Argentine bonds sold off. Let me clarify. Argentine euro-denominated bonds sold off. Down went the euro, up went the U.S. dollar, Down and then up went gold. European equities evened up as money sought out safe-haven, quality sovereign debt.

Few traders still rely on gut or instinct. There are times that I still do. What does my instinct tell me now? To simply understand that though I may ultimately be right about increased equity valuation despite an inconsistent environment where corporate earnings, international trade, economic growth and thus both fiscal and monetary policy are concerned, the path forward is going to be quite volatile.

We have said that in the past and been wrong. That is true. With that said, would it not be prudent to be mentally, physically and spiritually prepared for the rigors that a less certain life might present?

Far easier to manage a smaller book, to be more flexible when less encumbered. Far less dangerous for someone prepared for battle to farm than for someone prepared to farm to do battle. In other words, for investors, catching up from behind in a rising tape would be far more favorable than dealing with having to out-perform when the tape turns against thee. For at that point, odds be that thou would not prevail.

The S&P 500 surrendered 0.5% last week after having been down as much as 3.8%. The current bump in the road would be the 50-day simple moving average (SMA). The S&P 500 and the Nasdaq Composite found that spot to be "A Bridge Too Far" on both Thursday and Friday.

The sharp moves made by U.S. equities over the past week or so are all trade war related. From news that China would not buy U.S. agriculture to newspaper stories regarding whether a Chines delegation would still meet with U.S. counterparts in Washington this September. Those hopes were publicly doubted by the U.S. president as licenses for U.S. firms hoping to do business with Chinese telecom/5G giant Huawei Technologies were not issued.

Some when studying U.S. equity markets might just say, "What upward trajectory?" They wouldn't be wrong. While yes, markets are trading considerably higher year to date, there have been steep declines followed by sharp recoveries along the way. The trade war with China sort of officially started with the president's tariffs on washing machines and solar panels way back on Jan. 23, 2018. Last week, the S&P 500 traded below the peak of that January. Take a look. 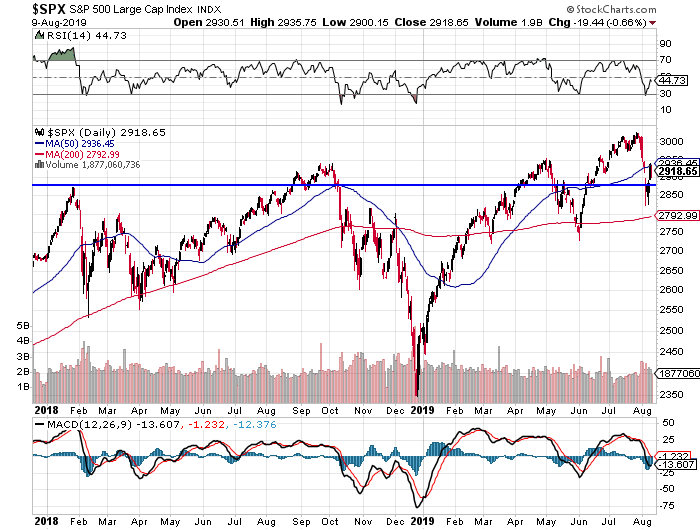 The broader market for large-cap U.S. equities is basically flat over approximately 20 months. Since that day, based on Friday's close and thanks to last week's "late week rally," the S&P 500 stands 1.5% higher (with futures pointing lower here on Monday morning). Up a few percent in 20 months? You might just be pretty good at this sport.

Apparently in a note to clients, Goldman Sachs analysts state that the trade war with China is having a greater effect on the U.S. economy and that the risk of recession is rising. Well, golly gee, fellas, what, gave it away? The badly inverted U.S. Treasury yield curve? The spiking U.S. dollar? About $15 trillion worth of negative-yielding global debt? I mean, is this really news?

More importantly than the headlines are the components. In this case, Goldman lowered fourth-quarter expectations for U.S. GDP to 1.8% quarter over quarter seasonally adjusted, while indicating a belief that the U.S. moves ahead with a scheduled 10% tariff on the remaining $300 billion of Chinese imports. Now, that's more helpful. This, coupled with the fact that the Chinese Communist Party has that big anniversary in October, to me at least means that the Chinese government cannot do anything that presents as concession prior to these events. If nothing happens in the way of a comprehensive deal after that anniversary, then, as Goldman states, the Chinese hold out all the way through the U.S. election in November 2020, hoping for change.

While the trade war is surely a drag on economic growth, the aims of the conflict are obviously necessary goals should a level playing field clear of national security concerns ever emerge. The immediate threat to domestic economic growth remains the Federal Open Market Committee's (FOMC) basic lack of understanding of what a badly inverted yield curve does to business planning.

The Fed's benchmark overnight rate of 2% to 2.25% stands at the higher end of the targeted range, inverted through the entirety of the U.S. curve (right through the 30-year). Anyone else see this as simply as much a reason for U.S. dollar over-valuation as anything else? Anyone else notice that S&P 500 revenue exposure is now up to 62% domestic, down to 38% international? Anyone else see the Dow Transports significantly under-performing the S&P 500 for months, or notice copper significantly (more like dramatically) under-performing gold over the same period?

Just what do the geniuses at the Fed think this tells us? By the way, it doesn't take a genius to figure this stuff out. Why there is such an inability at the leadership level to develop real-time economic thought beyond what is extremely elementary, I cannot explain.

The most important thing that any of us could have read last week was a blog post by PIMCO Global Economic Advisor Joachim Fels. Fels asks the reader, "What's behind negative interest rates?" In answering the question posed, Fels offers both demographics and technology as secular drivers behind depressed and negative global interest rates, and not just a "taxing banks' excess reserves" while making "bonds scarcer by removing them from the market through their purchase programs."

The opinion presented in the post by Fels makes the condition generational if correct, and not something that can be normalized in measured time. Either way, the FOMC is way behind the curve, so to speak, if the U.S. is to remain competitive.

I'm not going to pretend that everything I touch comes up roses. My readership knows better. That said, the Cold War with China has placed added value on a couple names that I have given you as the "trade war" component of the broader Cold War has intensified.

You'll recall that in preparation for these events I have placed focus on defense names that sell hardware to U.S. allies that live in China's neighborhood, such as Taiwan, Japan and South Korea. Well, two of those names, Lockheed Martin Corp.  (LMT) and Mercury Systems Inc.  (MRCY) , exceeded our price targets late last week.

What do we do at price targets? Well, you can do whatever it is that your sweet little heart desires. Personally, I tale a little something off, just to lock in some profit, and then I raise my target for the balance as well as (this is real important) my panic point for that same balance. Check out the charts. 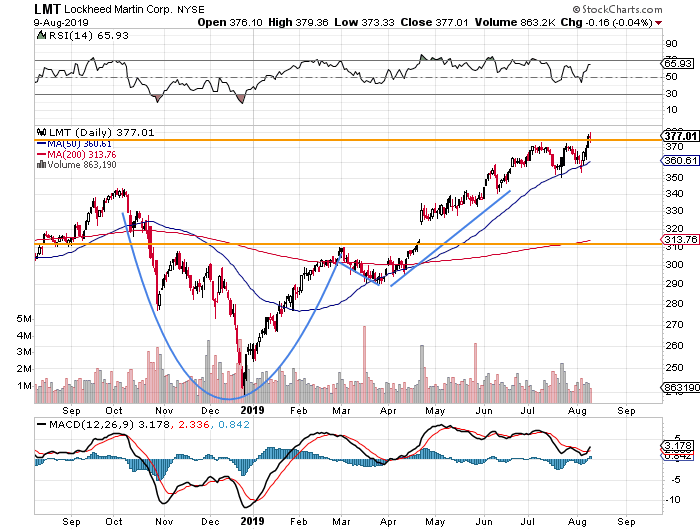 Pivot: No new pivot yet identified.

Note: Should a new pattern emerge, both target and panic will be re-adjusted. 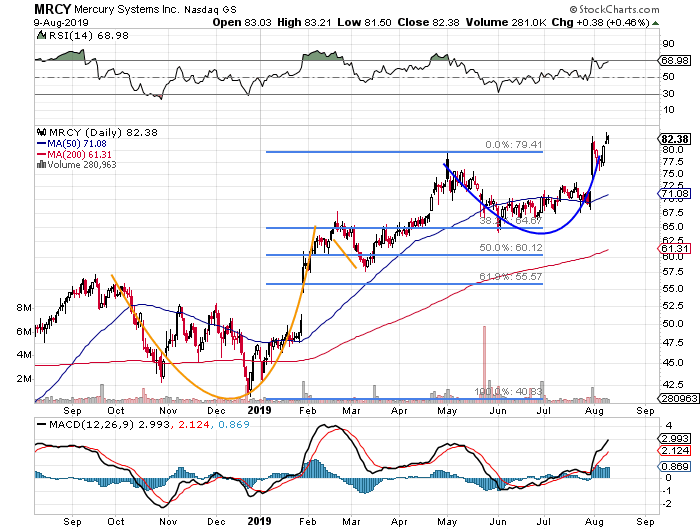 Note: Should the newly formed cup form a handle, the shares sold will be re-purchased at a discount, above the panic point.