Are we there yet?

Who doesn't know that question? If you have ever flown or driven with children, you know that question well. Heck, they need not even be children to ask that question. But that's the question that has filled my inbox in the last 24 hours. Well, it's a version of it: When will we get oversold again?

I tried to answer the question in Monday's column, but let's revisit it.

My own Overbought/Oversold Oscillator is based on the advance/decline line. It is the 10-day moving average of the net of the advance/decline. To get to an oversold condition, you have to have negative breadth and you must have it for several days in a row. In the last 10 trading days, net breadth has been red exactly four days and only one of those days has been decently red. So despite that you see the Oscillator has plunged on the chart, the math behind it doesn't say oversold.

Nasdaq is a bit of a different story, though. Breadth has been red for seven of the last eight trading days. That means Nasdaq, using this method, could be oversold early next week. I must say the red numbers aren't terribly red, but they are red.

About a week or so ago, I noted that despite the New York Stock Exchange breadth (advance/decline) being green on the day, the up/down volume was red by almost a billion shares. For six of the last eight trading days, the NYSE's net volume has been red and in some cases, solidly so. Beginning Tuesday, this breadth indicator will drop that string of red numbers, making it oversold.

TRIN (Trading Index) is an indicator that expresses the relationship between the advance/decline line and up/down volume. When we looked at the 10-day moving average two weeks ago, I noted it was under .80, which meant it was overbought.

Then we looked at it again this past Monday and noted it had come up quite a bit, it was now around 1.10. Here we are at the end of the week and the 10-day moving average has gone to 1.25. Typically once it is over 1.20, it has stepped a toe into oversold territory.

It is not a perfect indicator (nothing is!), but it certainly isn't overbought anymore, is it? 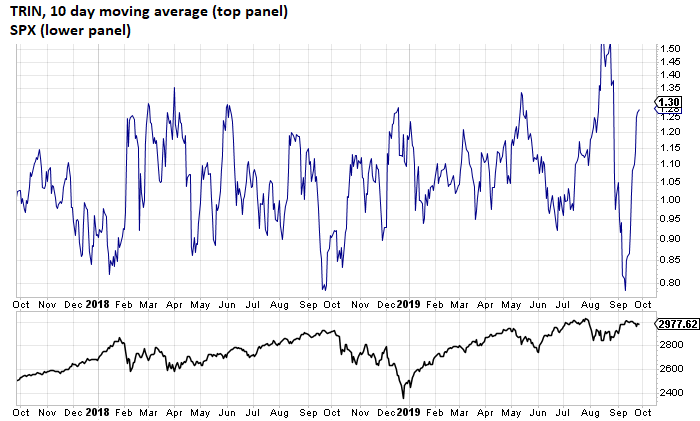 How does all of this possible upcoming oversold reading work when indicators such as the McClellan Summation Index are rolling over? Typically, we see the Summation go down and the indexes rally again. That's how we get negative divergences.

The 10-day moving average of the put/call ratio has even climbed, but I don't sense any panic out there, just an awful lot of gloom. To think just two weeks ago, folks were wondering if we'd ever correct again.

In case you missed it, I republished a column I wrote nearly three years ago on markets and politics on Thursday. I thought with the news this week, it might be worth revisiting. I didn't think much had changed since I wrote it.


Get an email alert each time I write an article for Real Money. Click the "+Follow" next to my byline to this article.
TAGS: Investing | Politics | Stocks | VIX |