To mark the Labor Day holiday, let's check on two labor-focused funds I wrote about earlier in the year to see how they are performing: the Amberwave Invest USA JSG Fund (IUSA)  and the Harbor Corporate Culture Leaders ETF (HAPY) .

I'll start with a quick review of each fund's selection process and then move on to some results and attribution.

The Amberwave Invest USA JSG Fund was launched Jan. 19, and sports a 67-basis point expense ratio, meaning that shareholders investing $1,000 would expect to see $6.70 in fees over a calendar year.

IUSA is actively managed, so there's no index to review, but the security selection process is outlined in the summary prospectus. It begins with a universe that is based on the constituents of the S&P 500 Index. From there, analysts use both quantitative and qualitative inputs, as well as their own forecasts to score each company based on their contribution to each of the following:

Once all names in the initial universe have been scored, a weighted average score is produced using a 50%/25%/25% scheme applied to jobs, security, and growth results, respectively. Names are grouped by the Global Industry Classification Standard sector and companies with "job, security and growth," or JSG, scores in the top quintile (20%) of each sector are selected. Because the issuer is attempting to fully represent the U.S. economy, it is important to note that this fund does not simply select the top quintile of JSG scored names of SPX but makes selections at the sector level as outlined above.

The fund tracks the Human Capital Factor Unconstrained Index, and, while I was unable to find a methodology document for this index, the prospectus spells out the security selection process pretty clearly on page 5. The starting universe is the Solactive GBS United States 1000 Index. Constituents must trade on a U.S. exchange and have a market cap greater than $1 billion. Human Capital Factor scores are applied to this starting universe and constituents are ranked, with the top 70 to 100 names selected for inclusion. Once the final constituent list is set, those names are equally weighted.

The metrics involved determining a company's Human Capital Factor include measurements of trust in management, company purpose, employee pride, psychological safety (how secure do employees feel their job is based on the overall health of the company), internal transparency and more. I was a little surprised to not see the Human Capital Factor scores worked into the weighting scheme, but understand that as insightful as this process is, it is still not the most exact of sciences.

Both these funds launched in the first quarter of 2022, so I've calculated returns from Feb. 24 through the market close on Tuesday, as shown below:

From these figures, it looks like the Folks at Amberwave are doing something differently than Harbor, and the S&P Selection Committee, as well. Reviewing the holdings for IUSA and HAPY bear that out as they share only six positions in common for a roughly 7% overlap. Commonly held companies include Microsoft (MSFT) , Intuit (INTU) , Lam Research Corporation (LRCX) , Ford Motor Company (F) , Etsy (ETSY)  and Prologis (PLD) .

Looking at returns since the end of last quarter through Tuesday tells a slightly different story, with IUSA gaining 5.54% and HAPY rising a full 8%, led by a number of previously beaten down names like Plug Power (PLUG)  rebounding 70.13% and a group of names bouncing 40%+ including Epam Systems (EPAM) , Ford Alnylam Pharmaceuticals (ALNY) and Etsy (ETSY) . IUSA focusing on older, more established companies is borne out in comparing these results as these companies didn't seem to get caught up as much in the pessimism of the first half of the year. 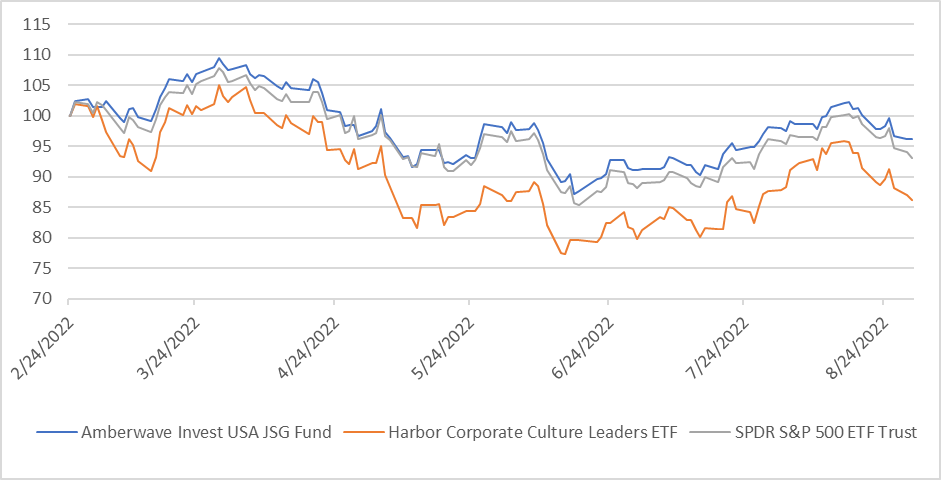 As we move into this "Era of Pain," investors might do well to not forget (or in some cases, learn) the old ways of valuing companies based on the value they bring to the economy. Given that there are expectations for more volatility in the coming months, some investors with shorter time horizons might feel the need to be more tactical in their approach and will find opportunities in the kind of bounce HAPY is going through.

My take is that a most investors are looking out a little further and are OK with a longer-term strategic approach like the one employed by IUSA. Depending on how you want to play the next few months, either of these funds might be worth a closer look.

Get an email alert each time I write an article for Real Money. Click the "+Follow" next to my byline to this article.
TAGS: ETFs | Investing | Stocks