Some more worrying signs appear to be showing in the stock market.

While the bulk of the index charts remain in near-term uptrends, psychology data and valuation continue to be of concern for us.

The charts of the major equity indices saw some weakening Tuesday, with two closing below their near-term support levels while two more registered bearish stochastic crossover signals. Also, the S&P 500 and its percentage of components above their 50-day moving averages are on a bearish divergence as discussed below. 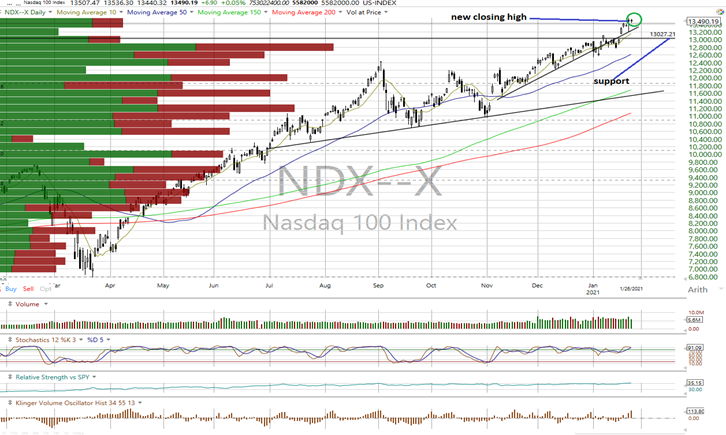 All the major equity indices closed lower Tuesday with the exception of the Nasdaq 100, which posted a new closing high (see above).

Breadth was negative on the NYSE and Nasdaq as the DJIA and Dow Jones Transports closed below their near-term support levels.

However, the DJIA remains in a short-term uptrend as the rest of the indices, except the Dow Transports, which is neutral.

Breadth deteriorated sufficiently to shift the cumulative advance/decline lines for the All Exchange, NYSE and Nasdaq to neutral from positive.

Also, the Midcap 400 and Value Line Arithmetic Index generated bearish stochastic crossover signals. However, they are not yet actionable as supports remain intact at present.

We would also note the bearish divergence between the S&P 500 price performance versus the percentage of its components trading above their 50-day moving averages that is in decline (see below). This is not a healthy structure, in our opinion, and adds another cautionary note. 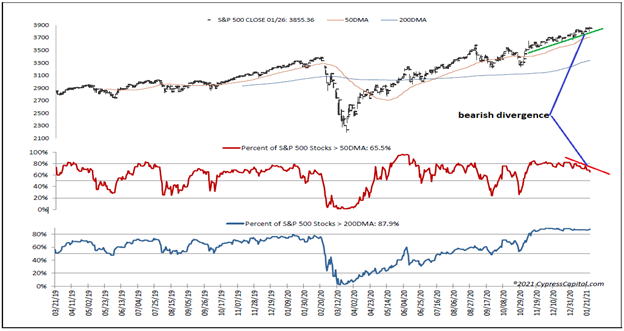 Yet the sentiment data continues to send some cautionary signals. The leveraged ETF traders, measured by the detrended Rydex Ratio (contrarian indicator), remain leveraged long at a bearish 1.28.

As mentioned last week, active insider selling versus very leveraged long ETF traders was presented four times during 2020, three of which were followed by market corrections.

Also, this week's Investors Intelligence Bear/Bull Ratio (contrary indicator) remains on a bearish signal at 27.8%, suggesting an excess of optimism on their part persists.

Valuation continues to appear extended. The forward 12-month consensus earnings estimate for the S&P 500 from Bloomberg has risen to $168.73 per share, which leaves the S&P's forward P/E multiple at 22.8x, while the "rule of 20" finds fair value at 19.0.

As the charts have weakened slightly, psychology data, deterioration of breadth and insider activity, remain quite cautionary as does valuation. We remain "neutral" in our near-term outlook.