Wulf said after 30 years of building and testing, AquaBounty has received Food and Drug Administration (FDA) approval to begin selling its salmon. When asked about AquaBounty's genetically modified products, Wulf admitted the company hasn't done a good job explaining the benefits of GMO products. GMOs allow AquaBounty to make high-quality protein products that are affordable and accessible, she said.

Wulf said she was very pleased when ARK Invest took a 12% stake in AquaBounty, noting that ARK sees the value in how the company can help feed the world in a more sustainable manner.

Let's check out the charts and indicators of this company.

In this daily bar chart of AQB, below, we can see that prices traded sideways for several months before exploding on the upside in December. AQB surged from just $4 to briefly over $13 in two months. Prices corrected lower from late January to early March, giving back about two-thirds of the advance. AQB is trading below the declining 50-day moving average line and still above the rising 200-day line. Notice the test of the 200-day line earlier this month. The trading volume surged in early December and has tapered off since then. The On-Balance-Volume (OBV) line surged from late November to late January and then weakened, telling us that some of the aggressive buying is leaving the stock. The Moving Average Convergence Divergence (MACD) oscillator hugged the zero line for much of the last year but turned bullish for the months of December and January before turning bearish again. Currently we see a cover shorts buy signal.

In this weekly bar chart of AQB, below, we can see the sideways consolidation pattern in the $3-$2 area before the upside move in December of last year. Prices are above the rising 40-week moving average line. The OBV line moves quickly from constructive to bearish. The MACD oscillator crossed to the downside last month for a take profit sell signal.

In this daily Point and Figure chart of AQB, below, we can see a potential upside price target in the $11 area.

In this weekly Point and Figure chart of AQB, below, we used a traditional even-dollar scaling and we can see a bearish downside price target of $0 -- zero. Not very promising. 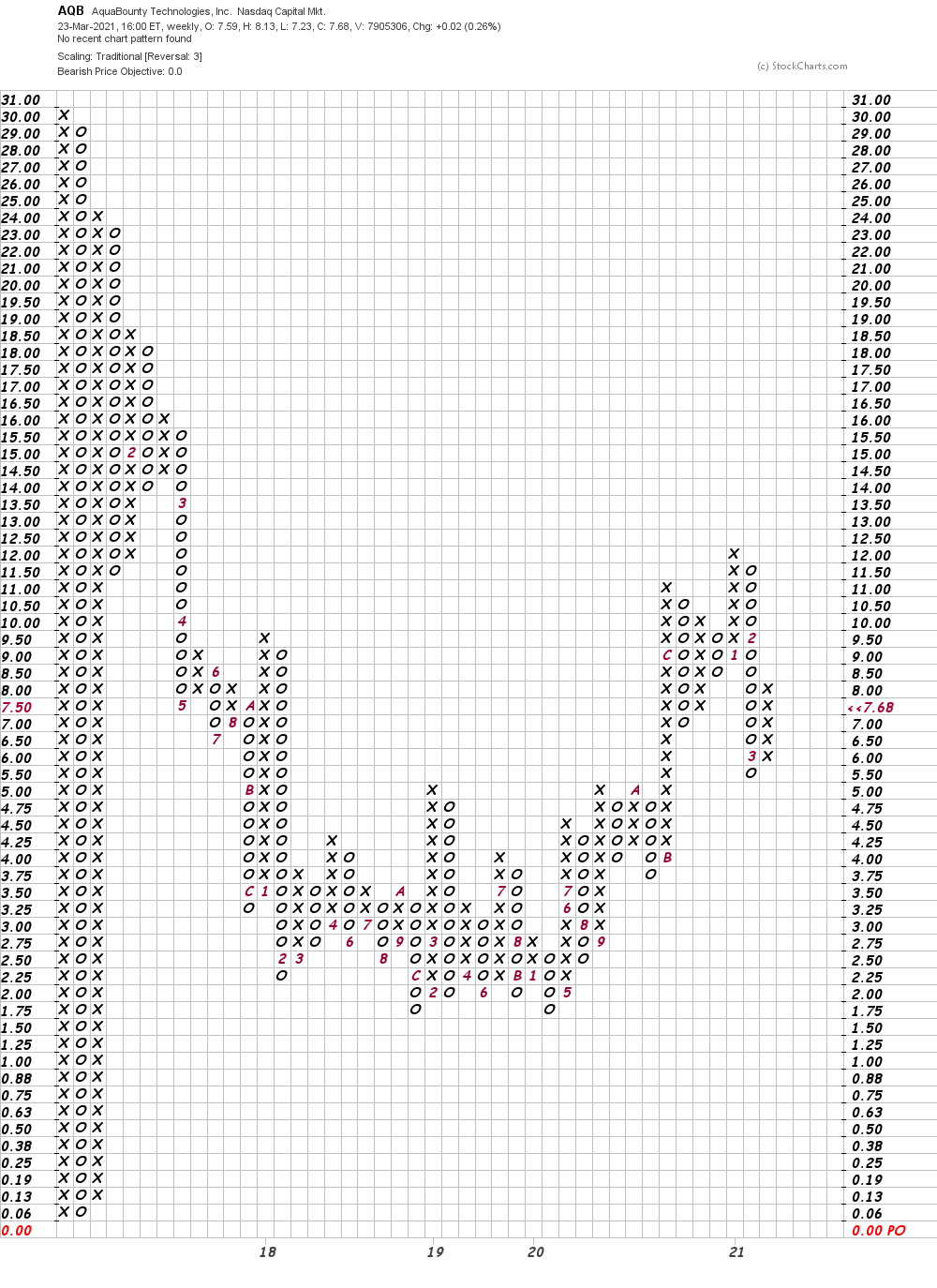 Bottom line strategy: This is an interesting speculation but the weekly Point and Figure chart suggests a grim forecast. I would avoid the long side of AQB. On a personal note, I look at the origin and "fine print" of all the food I buy, not just farm-raised salmon. Just saying.

Get an email alert each time I write an article for Real Money. Click the "+Follow" next to my byline to this article.
TAGS: Investing | Stocks | Technical Analysis | Consumer | Food & Drink | Mad Money | Executive Interview | Real Money