In his first Executive Decision segment of his Wednesday "Mad Money" program, Jim Cramer spoke with Gary Dickerson, president and CEO of Applied Materials (AMAT) , a maker of semiconductor manufacturing equipment that is working hard to alleviate the global semiconductor shortage.

Dickerson said Applied Materials saw the shortage coming even before the pandemic began. Thanks to the pandemic, the digital transformation is accelerating as people work from home, learn from home and are entertained at home, which has caused chip demand to explode.

When asked about President Biden's infrastructure plan, which includes the semiconductor industry, Dickerson said semiconductors are of strategic national importance and our nation must build its own foundries and make them a priority.

We reviewed the charts of AMAT back on Feb. 17 ahead of earnings. At that time we wrote, "Tuesday's candle pattern was a bearish gravestone doji. A bearish candle pattern here on Wednesday will be confirmation of a potential top reversal. Traders long AMAT should take some profits on their positions ahead of earnings." Prices stalled out after earnings and dipped into early March before renewed gains. Let's check and see how things look today.

In this updated daily bar chart of AMAT, below, we can see that prices pulled back in early March to test the rising 50-day moving average line. Prices have rallied to new highs and are approaching the extended or overbought level of twice the intersection of the 200-day moving average line. Trading volume has been increasing every month so far this year and the On-Balance-Volume (OBV) line has risen since early November to confirm the price gains. The Moving Average Convergence Divergence (MACD) oscillator has moved sideways since December but is pointed higher now.

In this weekly Japanese candlestick chart of AMAT, below, we see a positive picture. Prices are in a longer-term uptrend above the rising 40-week moving average line. The weekly OBV line has firmed since November which is good, but its advance pales in comparison to the price gains. The MACD oscillator is in a bullish alignment above the zero line. 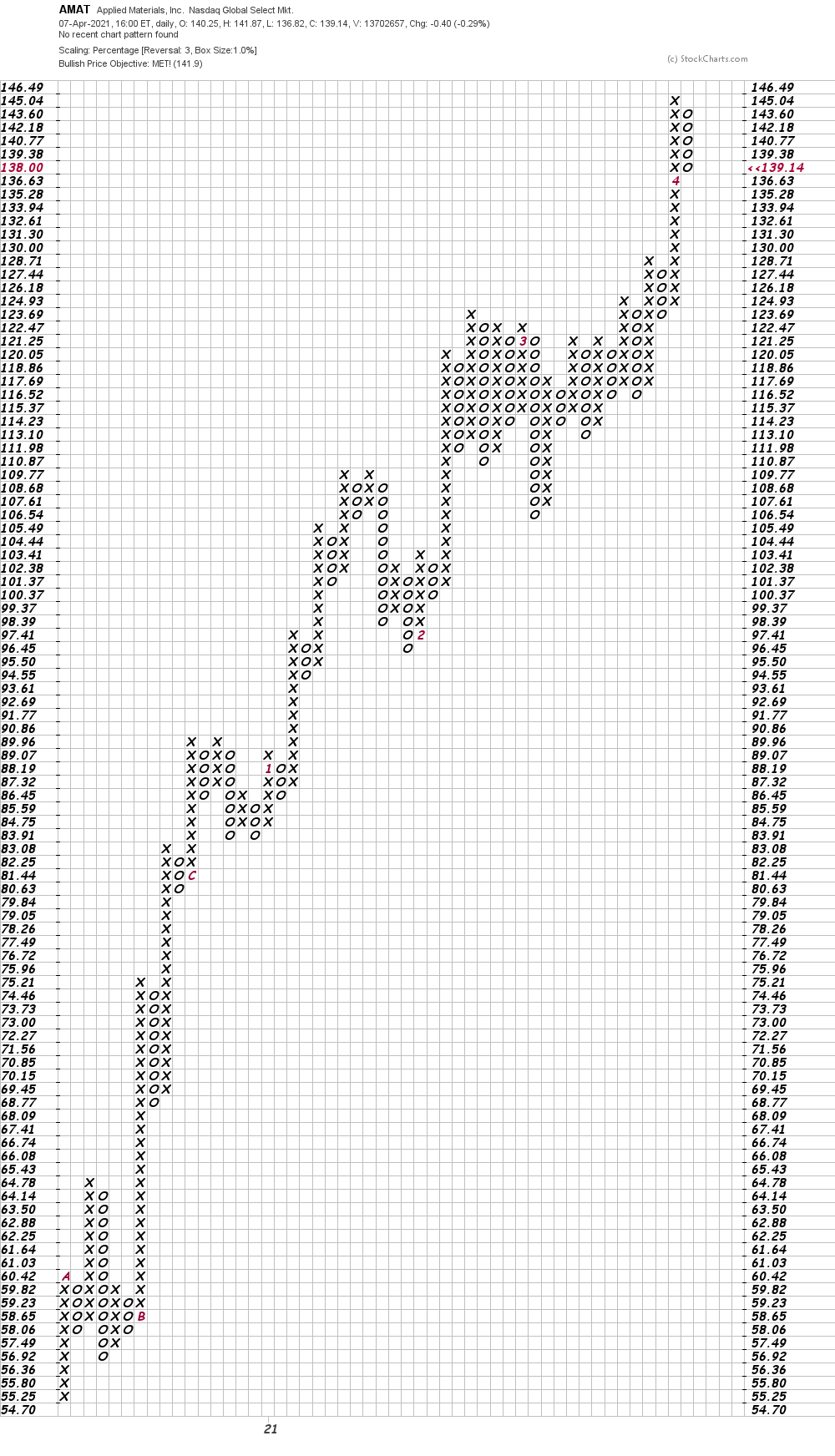 In this weekly Point and Figure chart of AMAT, below, we see that the software is projecting the $156 area as the next potential price objective.

Bottom line strategy: The charts of AMAT are getting a bit stretched on the upside, so I do not feel real confident about recommending new long positions here. Longs from lower levels should consider raising sell stop protection to $124.

Get an email alert each time I write an article for Real Money. Click the "+Follow" next to my byline to this article.
TAGS: Investing | Stocks | Technical Analysis | Semiconductors & Semiconductor Equipment | Technology Hardware & Equipment | Mad Money | Executive Interview | Real Money