Apple Inc. (AAPL) is the Stock of the Day at Real Money, with its share price sagging in pre-market activity here on Monday as traders and investors may be concerned about production delays and supply chain issues in China due to the coronavirus. Let's check out the charts and indicators of Apple, which is a holding of Jim Cramer's Action Alerts PLUS charitable trust, as they are a lot easier to analyze, in my opinion.

We looked at the charts of AAPL on Jan. 28; we wrote at that time: "Though securities can 'turn on a dime,' more often stocks make a top pattern or rally failure before a meaningful decline. We also know that the marketplace is a discounting mechanism, so bullish news can be discounted long before it is announced. To some degree the marketplace has discounted the earnings report after the close today, but there is always room for a surprise. If AAPL reacts lower, the decline is probably short-lived judging by past reactions."

The trading volume has been a bit heavier the last two weeks at the same time that prices have been stalled. Heavy volume around a potential high can mean a shift in ownership from strong hands to weaker hands. Another way of looking at this is that heavy volume and the stock stalling are not good signs as aggressive buyers are meeting equally aggressive sellers. The daily On-Balance-Volume (OBV) line has been stalled since early January and the Moving Average Convergence Divergence (MACD) oscillator crossed to the downside in the middle of January, generating a take-profits sell signal.

In this weekly Japanese candlestick chart of AAPL, below, we can see that the most recent three candles are reasons to anticipate a pause or a decline (a reversal pattern on candle charts can mean the trend changes from up to sideways or from up to down; both qualify as reversals). There is a spinning top followed by the long-legged doji. The candle pattern last week was positive, so we did not have confirmation of the reversal. A bearish candle this week could be the confirmation of a reversal. The weekly OBV line shows weakness and the 12-week price momentum study in the lower panel shows the pace of the rise has weakened the past four weeks.

In this daily Point and Figure chart of AAPL, below, we can see a potential downside price target in the $280-$275 area. A trade at $299.87 will probably weaken this chart. 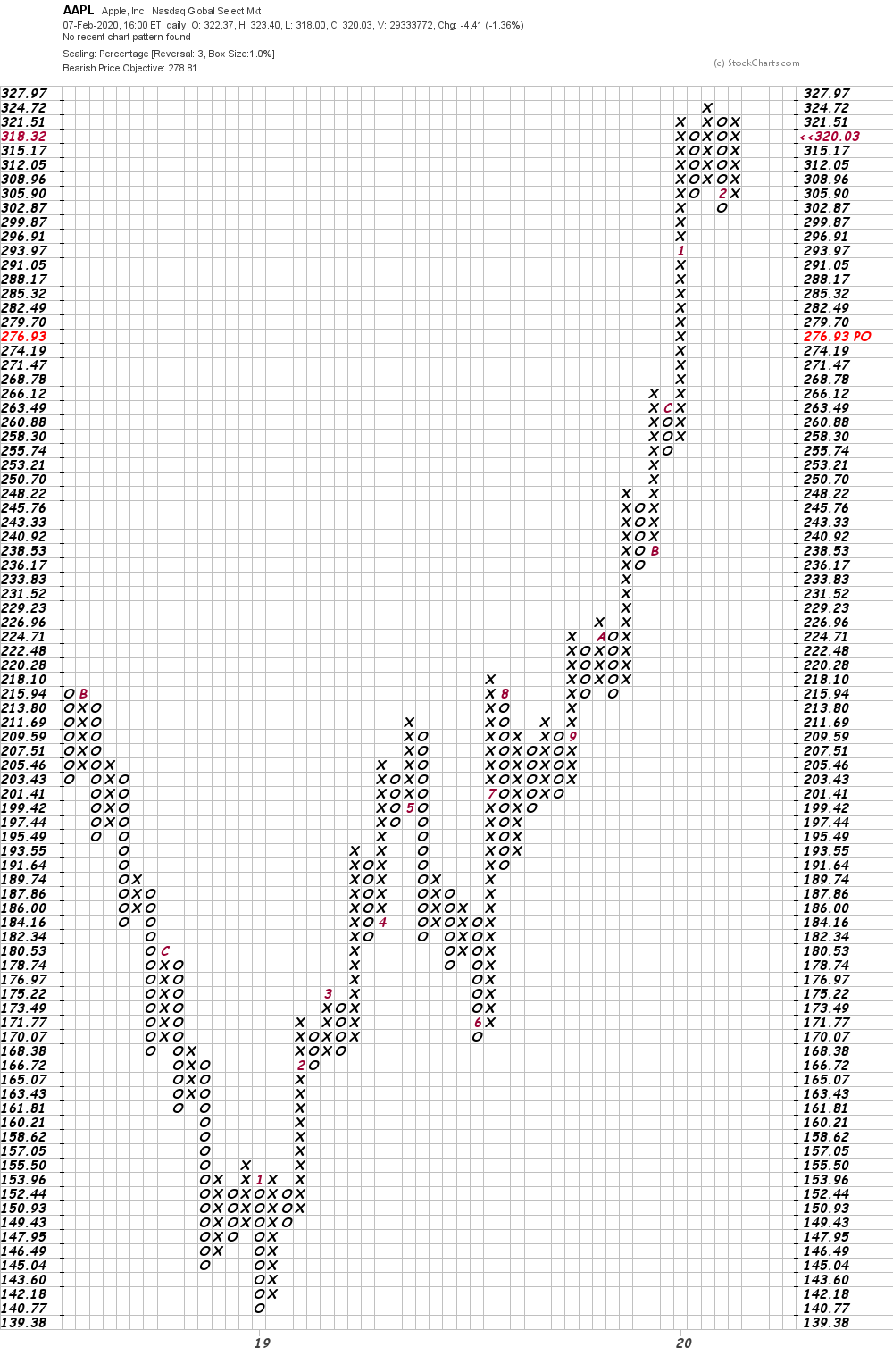 Bottom line strategy: Some short-term traders may be sellers of AAPL in the near term, but without a big top formation or a long-term bearish divergence it is hard to make the case for a meaningful correction or pullback.

Get an email alert each time I write an article for Real Money. Click the "+Follow" next to my byline to this article.
TAGS: Investing | Stocks | Technical Analysis | Consumer | Media | Music | Technology | Technology Hardware & Equipment | Television Production/Distribution | China | Real Money | Consumer Discretionary | Stock of the Day