If the Apple (AAPL) warning really surprised you, then you'll probably enjoy the "surprise" ending of the movie, Miracle, about the 1980 U.S. Olympic hockey team.

It was only a week ago, the headline for my Apple story on this site read: "The Coronavirus Will Have Some Impact on Apple in the Current Quarter."

I said, "If the virus spreads and the shutdown continues, then that time frame will lengthen to at least two quarters."

Let's compare that to Monday's headline: "Apple Warns for March Quarter Due to Coronavirus."

I'm not a genius. I'm not Carnac the Magnificent. I'm not The Amazing Kreskin. This wasn't magic and pretending like this announcement was a surprise is comedy.

It can cause us to remain stuck in a position for far longer than what is necessary. But don't confuse this with a lack of demand or something fundamentally wrong with the company.

Could Samsung sneak some demand away from Apple or inch ahead because it doesn't rely heavily on China? Absolutely, but this is also something already known. 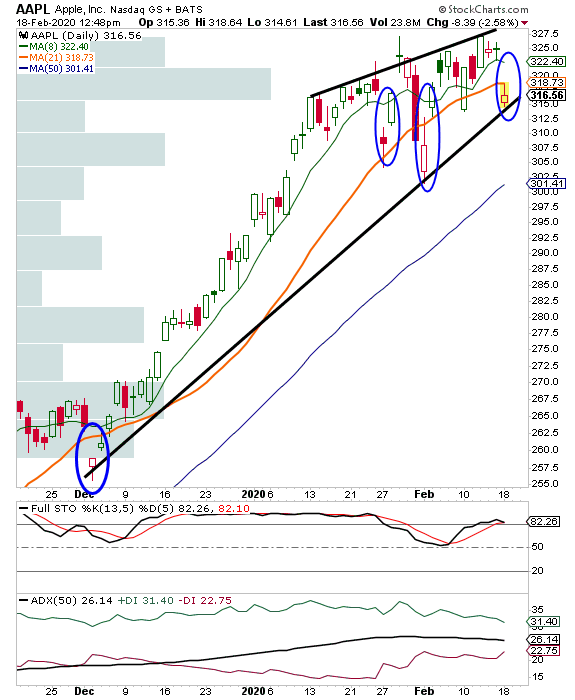 What matters most is what happens Wednesday. Take a gander at the daily chart of Apple going back to December 2019. Three previous times we've watched the stock gap lower. Each time, after a gap lower, the shares have gapped higher the next day. From there, they pushed higher the day after as well.

Where does that leave us?

If Apple gaps higher Wednesday, then I think you buy the open, and play it long the next 2-3 days using a trailing stop of the previous day's low. The $315 level appears to be the long-trending support. If that fails, then I could see Apple testing the 50-day simple moving average (SMA) which happens to sit right near a nice, large round number of $300.

Tuesday's low acts as a great stop. Even if the stock opened at $320 Wednesday, going long means a trader would look at risking $5 for an upside of $10 to $15 based on the previous three patterns, three patterns that have all repeated the same thing.

I wouldn't overthink this. If your time frame is only a few weeks, even a couple of months, then I would expect volatility and pay attention to the technical picture, but if you are a long-term investor in Apple, I don't think this news changes anything. It's a fundamental blip.

If the supply constraint continues for several months, then I would expect Samsung and Android to steal some business that Apple won't recover, but again, I think we are talking a handful of basis points and nothing significant.

I'll focus on Wednesday. If there is a gap higher, then I'll take the long trade. If the stock breaks below $315, then I'll look to $300 for the next support level, but I'm still not ready to get aggressively short in this market.

Get an email alert each time I write an article for Real Money. Click the "+Follow" next to my byline to this article.
TAGS: Investing | Markets | Stocks | Technical Analysis | Stock of the Day