That thinking can also be applied to Apple (AAPL) . There's little about the company that screams attractive reward versus its risk in terms of a short.

After the bell on Wednesday, Apple posted fiscal fourth-quarter revenue of $64 billion, a cool billion ahead of forecasts. Earnings per share of $3.03 landed $0.19 ahead of expectations.

Services and wearables continue to pace Apple. Although revenue growth was only up 2% for the entire company, Services increased 18% year over year while Wearables skyrocketed 54%. Even iPhone revenue of $33.4 billion slightly exceeded the $32.8 billion expectations.

It's fair to say analysts, as a whole, weren't overly thrilled with the iPhone 11 numbers, but remember volume was recently increased. I also think it is fair to say the current cycle lived up to expectations and the consumer action bodes well for the 5G cycle. Granted, I think that cycle may take a little longer to get rolling than the market anticipates, but it will come.

While iPhones, Wearables, and Services all outperformed, the quarter wasn't perfect. Mac sales are not only dragging, but also coming in skewed toward the lower end of pricing/margins. Overall, the gross margins hit 38% for the quarter, so it wasn't as though Mac sales prevented a strong number. Also, let's be realistic. Apple is not about the Mac, at least not anymore. It's a nice complement to the rest of the business, but that's all it will be for the foreseeable future.

The ability to not only obtain, but hold customers may be the big story moving forward. Between the growing subscription services such as Arcade, News, and TV combined with the bundled pricing or free TV+ with new devices should help make a low churn rate even lower.

In other words, Apple has a grip on its consumer that competitors will have a hard time tearing away. They may be able to wrangle a timeshare, but Apple is moving its lifestyle brand to the next level. It will take a few quarters for this to sink in, but at least revenue guidance for next quarter offers a midpoint slightly above current expectations. 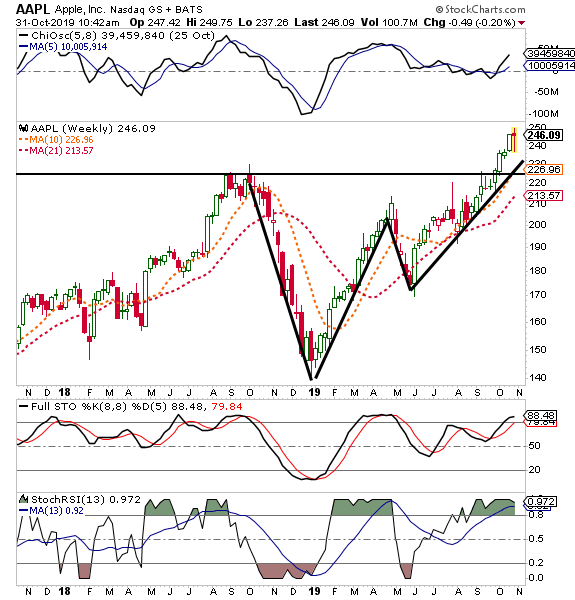 As far as the price action goes, the stock is a little extended from a bullish "W" pattern after breaking above resistance of $225. Apple will generally consolidate sideways for a few weeks when this extended or slowly pull back to meet the rising support line. If that happens, then I would look for a downside of $235 to $240 before it finds support.

For those wanting to short, then you want to see that support line broken in conjunction with the StochRSI falling below the 13-period moving average as well as a bearish crossover in the Full Stochastics. The Full Stochastics bearish crossover has been the best play with a stop set slightly above recent highs. Again, this would be a trade that could last anywhere from a few weeks to a couple of months, but it is worth watching. However, until we see that break of support and the bearish crossovers, I would target the pullback to support as an area to look for entry or where I set my protection levels.

Get an email alert each time I write an article for Real Money. Click the "+Follow" next to my byline to this article.
TAGS: Short-selling | Earnings | Investing | Stocks | Technical Analysis | Trading | Stock of the Day