Apple Inc. (AAPL) was trading nearly 2% higher before the opening bell Thursday on the heels of a positive earnings report. It is the Stock of the Day at Real Money, so let's drill down on the charts and indicators of Apple, which is a holding of Jim Cramer's Action Alerts PLUS charitable trust.

In this daily bar chart of AAPL, below, we can see that prices have been in an uptrend since early January. AAPL's price continued to rise this summer while the broad market averages struggled. Prices are firmly above the rising 50-day moving average line as well as the rising 200-day moving average line. AAPL is not extended above these two indicators as minor corrections along the way are visible.
The pattern of volume does not show an increase over time, but the On-Balance-Volume (OBV) line shows improvement from June and an earlier low in December. The trend-following Moving Average Convergence Divergence (MACD) oscillator has been in a bullish mode above the zero line since June.

In this weekly bar chart of AAPL, below, we can see that prices have more than doubled over the past three years. Last year was a challenge for buy-and-hold longs as many technical sell signals can be seen. In less than a year, however, AAPL has recouped the 2018 losses and climbed to new all-time highs. Prices are above the rising 40-week moving average line. The weekly OBV line is strong and bullish and not far from making a new high of its own. Buyers of AAPL have been more aggressive for years and that shows in the price action. The weekly MACD oscillator has been outright bullish since March when it crossed above the zero line.

In this Point and Figure chart of AAPL, below, we can see a fresh upside breakout at $229.23 and a new upside price target of $314. 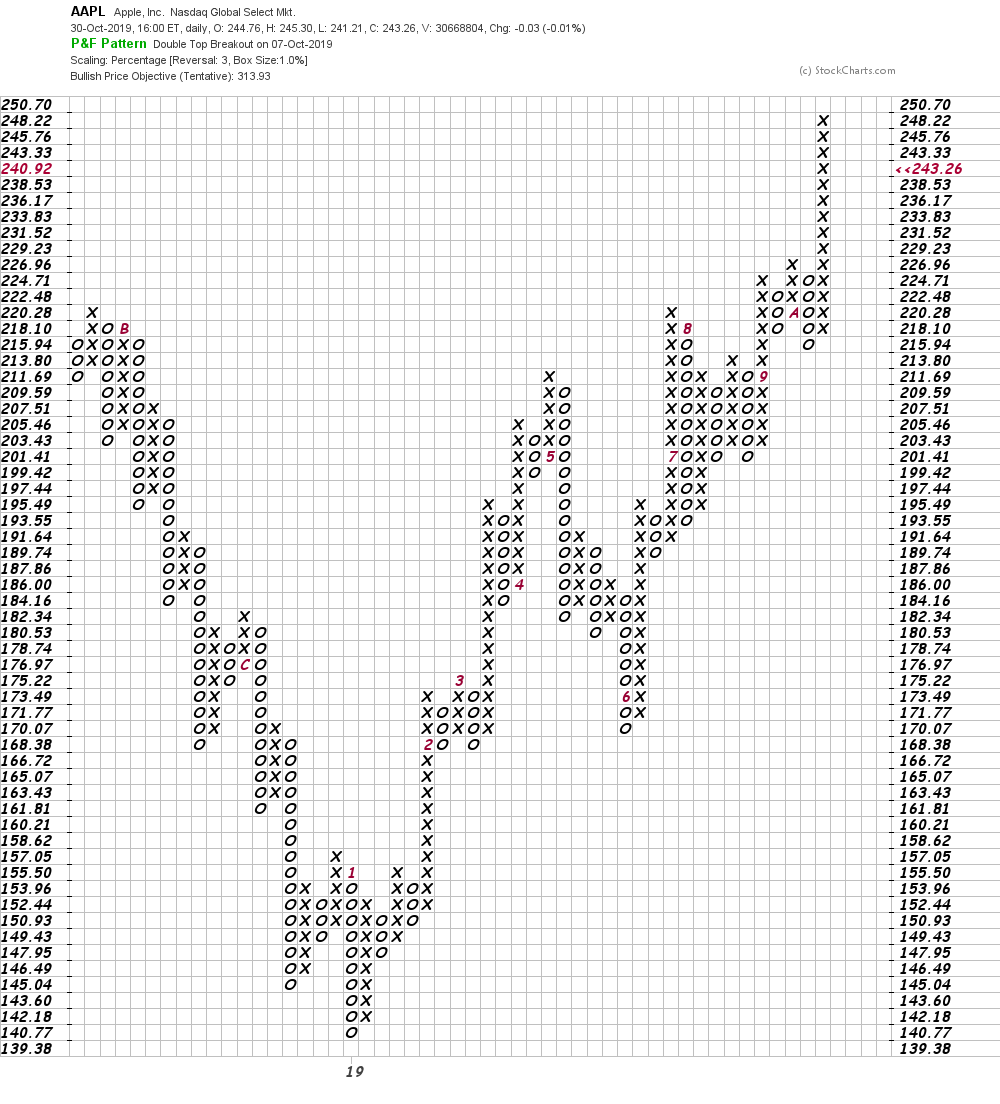 Bottom line strategy: It looks like Apple once again is proving itself to be a buy-and-hold security. Risk a close below $230 now .
Get an email alert each time I write an article for Real Money. Click the "+Follow" next to my byline to this article.
TAGS: Earnings | Investing | Stocks | Technical Analysis | Consumer | Digital Entertainment | Media | Music | Technology | Technology Hardware & Equipment | Television Production/Distribution | Real Money | Consumer Discretionary | Stock of the Day

CrowdStrike Is Pointed Higher but Could Experience Some Profit Taking

The price action tells me that traders are anticipating a strong earnings report Tuesday.

Does Zoom Have More Upside Room?

The company is set to report earnings as the stock soars higher.

2 Overlooked Small-Cap Names That Should Perk Up

The prospects of dating site operator Spark Networks and chemical producer Olin Corp. should improve as the economy opens back up.

Let's hope that the violence subsides, the valid voices of peaceful protesters are heard, and the lack of social distancing protocols does not lead to a resurgence in the spread of the virus.

When the News Flow Doesn't Matter, Focus on the Price Action

If you are trying to predict what this market is going to do based on news headlines, you are out of luck.