Last Friday the Bureau of Labor Statistics released its non-farm payroll report for December. The result of 223,000 new jobs was slightly higher than expected, but was balanced by a downward revision of 28,000 for the previous two months.

Despite Friday's bullish flash, the market is still in bear mode. The S&P 500 remains beneath a bearish trend line (black dotted line), currently located at about 4,025, and below its descending 200-day moving average (red), currently positioned at 3,993.

Apple is a drag

Overcoming those two obstacles may be difficult, especially with key stock Apple (AAPL) getting dogpiled by analysts. Apple received a downgrade from outperform to neutral from Exane BNP Paribas on Jan. 3. The French bank lowered its price target to $140 from $180.

Then on Monday, Apple saw its price target lowered to $125 from $170 by Bernstein, which maintained its outperform rating on the stock.

On the weekly chart, Apple's bearish double top pattern remains clearly visible. The stock's volume has been low since late November (shaded yellow), an indication that investors are awaiting a catalyst. Apple's earnings are scheduled to be released after the close on Feb. 2. 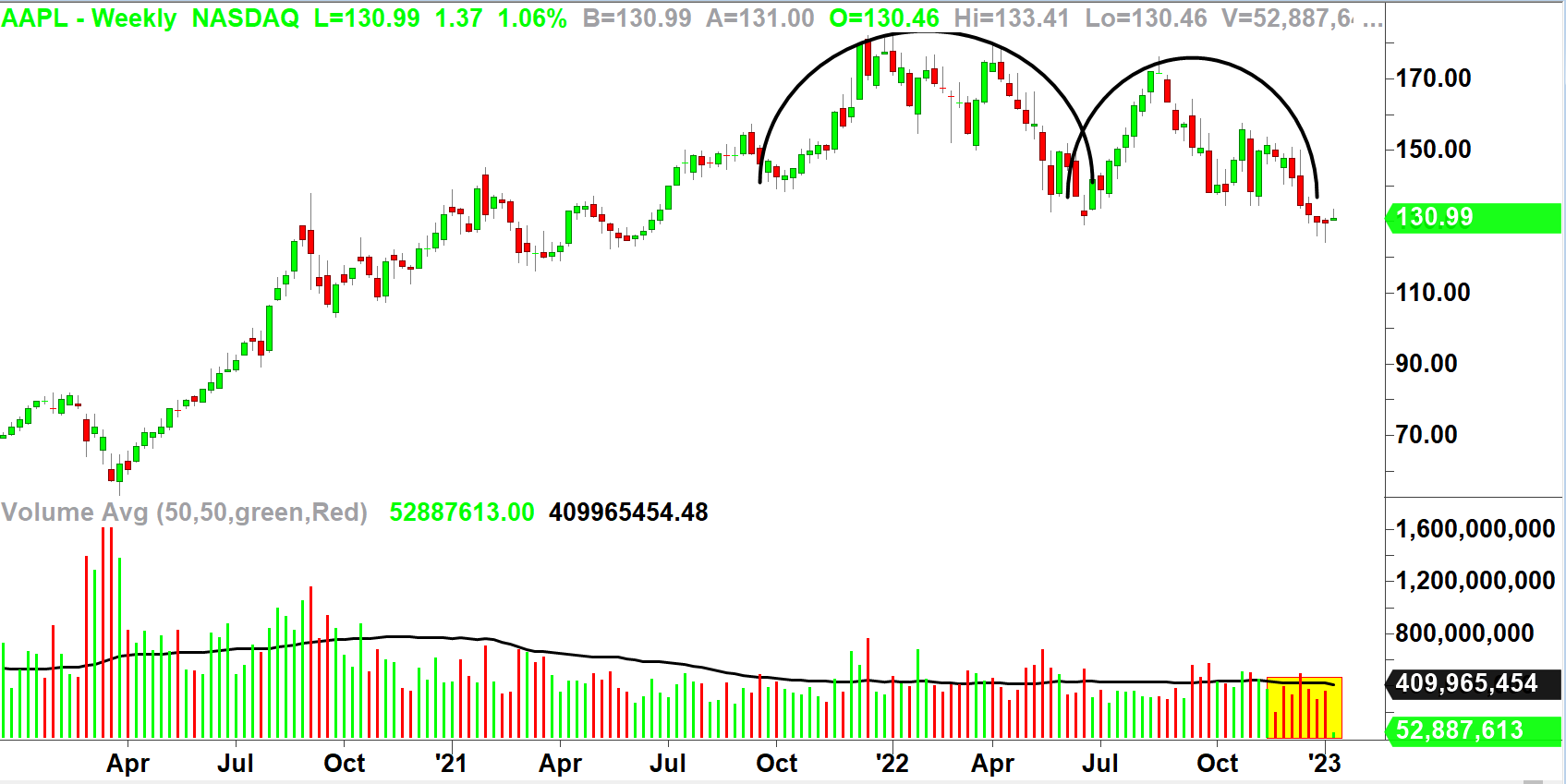 Lululemon Athletica (LULU) was rocked for a 9.3% loss on Monday after the maker of athleisure wear lowered its fourth quarter guidance for gross margins.

The thing that really should concern investors is the stock's chart, which shows a massive head-and- shoulders formation (L-H-R). The bearish pattern began forming in mid-2020.

Alibaba Group Holding (BABA) is coming off a rough couple years and is down by half since the start of 2021. However, on Monday, the stock jumped 2.89% on news that founder Jack Ma was giving up control of Ant Group, an affiliate of Alibaba.

Over the past six months, the stock has formed a rounded bottom. Also, Alibaba is trading above its 50-day moving average (blue) for the first time in nearly a year.

In addition to the news about Ma, the stock is also a beneficiary of China's reopening. Alibaba's bullish pattern suggests the stock could run to $140.

(AAPL is a holding of Action Alerts PLUS. Want to be alerted before the portfolio buys or sells these stocks? Learn more now.)

Get an email alert each time I write an article for Real Money. Click the "+Follow" next to my byline to this article.
TAGS: Indexes | Investing | Stocks | Technical Analysis | Apparel | Technology | E-Commerce | Real Money | Economic Data

Sealed Air Is Ready to Pop

Just like its bubble-wrap, Sealed Air Corp. is ready to make some noise. Let's see how to play it.