Becker said after speaking to private equity firms and considering a traditional initial public offering, APi Group's reverse merger with a SPAC, or special purpose acquisition company, "felt like the right home" for the company.

APi Group is in the fire protection and sprinkler system business, Becker said, but it also has a large industrial services business that he believes gives the company a "protective moat" around it.

Let's check out the charts of APG.

In this daily bar chart of APG, below, we can see that prices rallied quickly from the middle of March to the middle of June. The trend from June has shifted from up to sideways to higher the past four months or so. Prices tested the rising 50-day moving average line in July, September and October and early November. Another test of this shorter moving average line would not surprise me. The trading volume was heavy in June but has been light over the subsequent months. The On-Balance-Volume (OBV) line has been flat since July and does not confirm and support the rally. The Moving Average Convergence Divergence (MACD) oscillator is just slightly above the zero line.

In this limited weekly Japanese candlestick chart of APG, below, we can see a mixed picture. Prices are trading above the rising 40-week moving average line, but many of the weekly candle patterns are spinning tops with small real bodies. This suggests a balance of bulls and bears as there is not much progress from the open on Monday to the close on Friday (weekly candle). The OBV line shows some modest improvement in October and November. The MACD oscillator is above the zero line but could turn up or down as the two moving averages of the indicator are on top of each other.

In this daily Point and Figure chart of APG, below, we can see a very modest price target of $17. 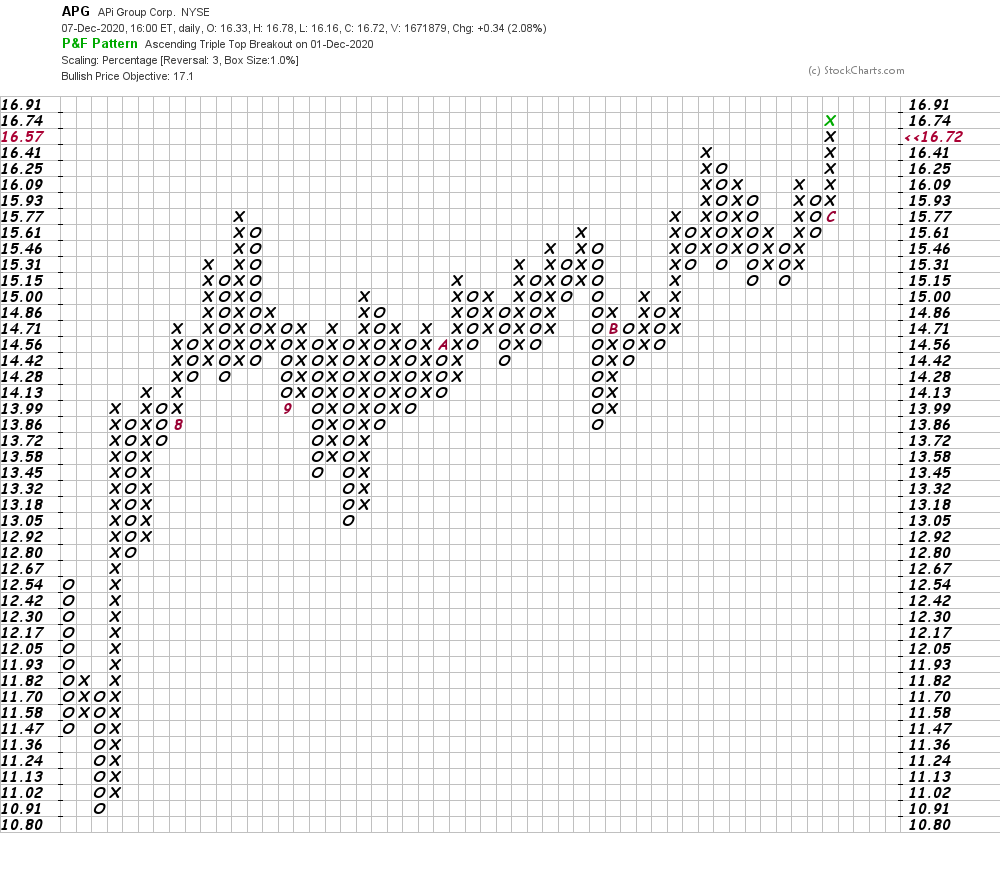 Bottom line strategy: With only a $17 price target from the Point and Figure chart I do not find APG an attractive long idea. A decline to $14.50 is likely to weaken the chart.

Get an email alert each time I write an article for Real Money. Click the "+Follow" next to my byline to this article.
TAGS: Mergers and Acquisitions | Investing | Stocks | Technical Analysis | Commercial & Professional Services | Mad Money | Executive Interview | Real Money