A Perception of Strength

The marketplace may find some uncertainty in what transpired in Papua New Guinea over the weekend. My thought on that is simple. There was never any certainty to be had in the first place. What investors know is that there will be a meeting between the U.S. and China at the highest level at the G-20 summit in Argentina in less than two weeks. That is all.

Everything that you'll hear about the APEC (Asia Pacific Economic Co-operation) meeting over the weekend is posture. Understand that for leaders like President Trump and President Xi, to be perceived as entering any type of discussion over trade as coming from a position of strength is important.

On Friday afternoon, the president extended the olive branch. President Trump did not want to put "China in a bad position." The president allowed for optimism, mentioning a list of moves that the Chinese were apparently willing to make, that did not quite go far enough for the U.S. to agree to a deal.

Throughout this era of rising tension over trade between the U.S. and China, the role of "enforcer" has been played by U.S. Vice President Michael Pence. Over the weekend, the Vice President pulled no punches. "The United States will not change course until China changes its ways." Those were the kinder words. Pence went on, "China has taken advantage of the United States for many, many years and those days are over."

Tensions increased as the event dragged on, as for the first time in the 29-year history of the APEC summit, there would be no issuance of a final communique -- the Chinese, according to the Wall Street Journal quoting an unnamed U.S. official, was unable to agree with the balance of the 21-nation group on the language proposed.

President Xi warned on confrontation, unilateralism, protectionism, cold wars and trade wars. Vice President Pence could only have been more direct if he had actually named China when he said "Do not accept foreign debt that could compromise your sovereignty. Protect your interests. Preserve your independence. And just like America, always put your country first." Neither leader actually named the other.

Hardliners? Perhaps. Posturing? For sure. Does that mean something gets done? Not necessarily. In my humble opinion, this is better though than no news, or a feigned level of etiquette that leaves folks wondering. Positive headlines will propel markets in the right direction in two weeks. My expectation is that both nations will make statements that at least sound like compromise, while any actual agreement will likely be vague in nature.

One thing certain? It is at that point that I think we'll understand whether the two toughest kids on the block are both feeling heat at home to clean this up. Who wants it more may matter to what the nomenclature of global economic development ends up looking like. The marketplace, however, is ready to accept anything short of the escalation of this trade war as a victory.

Do They Read Market Recon?

We can only hope. Apparently, however, after Minneapolis Fed President Neel Kashkari, and Atlanta Fed President Raphael Bostic had both openly pondered the pace of rising short-term interest rates, the chorus has grown. On Friday, Fed Vice Chair Richard Clarida, while not truly backing away from the Fed's stated trajectory for policy, did seem to allow for the possibility that the Fed Funds rate could be approaching "neutral." Later, Philadelphia Fed President Patrick Harker indicated that he might not be quite on board with a December rate hike.

While I have been critical of the Fed in general, and I openly applaud their introductory use of the innate human ability to reason, I do find it somewhat troubling that nary a word is spoken regarding those slices of domestic macroeconomic data that have been in steady decline for a number of months. It's as if these obviously highly intelligent individuals choose not to see what does not support their intention.

What is obvious is that futures markets have noticed the soft spots developing in the economy. While markets still expect an increase to the upper bound of the target range for the Fed Funds Rate to rise from 2.25% to 2.5% on December 19th, the probability of such a move has declined to 69% according to those futures markets.

Going further out, it gets even more interesting. The first rate hike of 2019, even though every single FOMC policy meeting will be considered "live," is not priced in until June, and that's only a 60% probability. A second 2019 rate hike is not even fully priced in at all, the odds of two 2019 rate hikes in aggregate has now dropped to a rough 40%. Far different from the bill of goods that we have all been sold, I might add.

What May Matter More

What I would like to hear more on, but perhaps never will, would be some commentary on balance sheet management. If you read me, you are all aware that I have concerns that the steady, rapid pace of quantitative tightening would, in a rational world, work to reverse the benefits created by quantitative easing unless the velocity of money had reached, and sustained itself at some much higher level... which it has not. I think this balance sheet rolloff needs a more hands-on approach than has been received. Forgetting about the balance sheet and going about our business would not seem very wise to me.

I have to think that those at the FOMC had thought that the yield curve would repairs itself. It still might. That said, the heavy-handed approach to the short end of the curve while semi-ignoring the ongoing reduction in potential liquidity has placed the economy in a more precarious position at this stage of the game than was necessary. Do I get started on forcing dollar strength in a global economy running on two flat tires and how smart that was?

If one is going to trade the markets this week, one is going to have to play the retail game. Black Friday approaches this Friday, though Black Friday has really become nearly as cyber as Cyber Monday. With an early Thanksgiving this year, the holiday shopping season stretches out over five weekends. That is usually taken as a positive. It may also mean that as the season drags on, retailers will resort to deep discounting in order to reduce remaining inventories. That would pressure margins and create, even if sales were considerably higher, a level of margin pressure that would develop into an overall sloppy performance by the group creating winners and losers.

Do I think there's some value here? Yes, I actually do. I mentioned last week that I was adding to KSS, and I did. That name trades at just 13x forward-looking earnings, has transformed itself into an ally, and not a target, of a firm like Amazon (AMZN) . You know I like the management here and think the name unfairly beaten on with the group.

This week, however, I am thinking about Target more than I usually do. I had long ago chosen the already mentioned Amazon and Walmart as favorites over this name, but Target has hung tough with the big kids. Can TGT see same-store sales growth of 5%? That would dwarf Walmart's performance. Can the firm maintain the 35% pace seen earlier this year in e-commerce? Is Target able to capitalize off the demise of Toys R Us? Let's see what we can see. The digits are due on Tuesday morning. 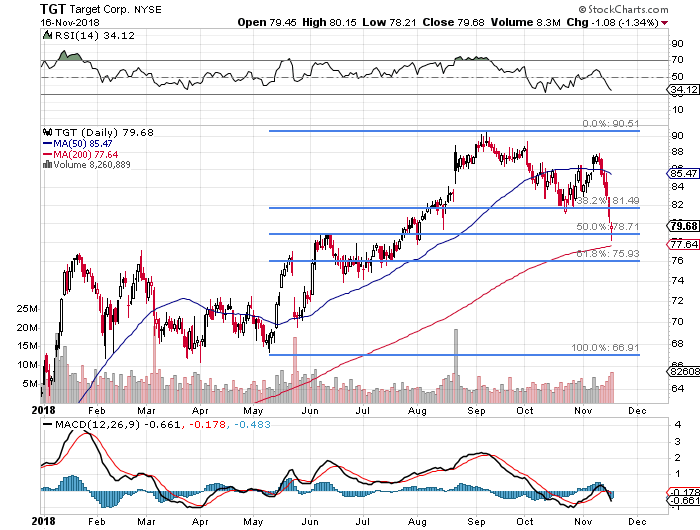 My thought is this. I really do not want to run out and purchase the equity today at market prices with earnings due on Tuesday. Keep in mind that the name will trade ex-dividend tomorrow as well, so if you do want the quarterly payout of $0.64, today is the day.

All that said, there does appear to be likely support in the $76 area, with cause for resistance above $85.

Here is my risk-averse trade idea for Target going into earnings (in minimal lots):

Notes: The initiation of the "bull call spread" coupled with the sale of the put with a strike price at what I see as possible support accomplishes the most important mission that any trader can possibly ask of his or her set-ups... it pays for itself. In this scenario, a last sale above $80 by Friday would be profitable, while this trader would have to pony up for the shares should the last sale decline below $76 by Friday's closing sale.