Thursday's price wasn't pretty, and I'm talking about the regular session, not the after-hours period when Amazon (AMZN) delivered a dud of an earnings report and prices fell apart.

Beginning with the SPDR S&P 500 ETF (SPY) , price was rejected for the second day in a row from the 50-day simple moving average (SMA) and the volume-weighted average price (VWAP) anchored to the mid-August swing high. The rejection from the SMA and VWAP isn't a trend killer, but the lack of momentum dulls the short-term excitement. On a positive note, the 14-period Relative Strength Index (RSI) is still well above 50, and that's a reason to expect a short-term dip to attract buyers. 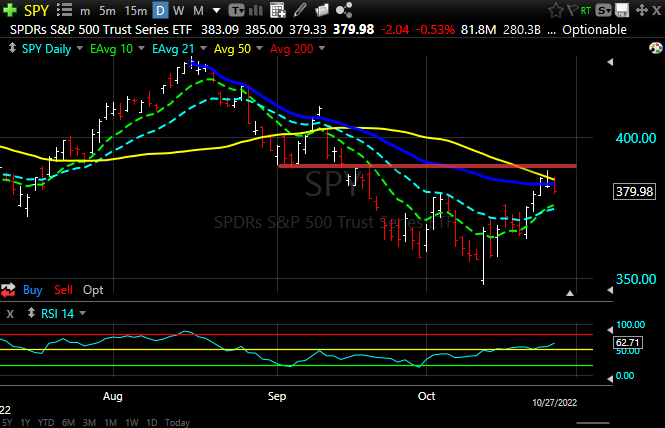 From a trading perspective, a couple days of consolidation, while the 10-day and 21-day exponential moving averages (EMAs) catch up, would be very bullish. A break of that red line should be sufficient to trigger some fear of missing out (FOMO) among traders.

Shifting gears to the Invesco QQQ Trust (QQQ) , the regular session was weighed down by Meta Platforms (META) , but let's not pretend Mark Zuckerberg is responsible for all the losses. All the generals -- Apple (AAPL) , Microsoft (MSFT) , Alphabet (GOOGL) and AMZN -- ended the regular session well in the red. The only rally attempt occurred around 10 a.m. ET and fizzled within 30 to 45 minutes. The bulls could not retake the day session's VWAP for the rest of the day.

The after-hours session is where the wheels come completely off the bus. While AAPL recovered from its after-hours decline to trade a bit above its regular session close, AMZN lost more than 13% after releasing its earnings. The QQQ declined nearly $6 as AAPL and AMZN traded around their after-hours lows. But like AAPL, QQQ bounced a few dollars as traders realized Apple's earnings weren't too bad.

Unfortunately for Amazon, its chart looks terrible. Barring the stock reversing and closing back above $102, I'd avoid it altogether, potentially revisiting it closer to $70.

Technically, you do have all of the confirmation that you need to support a broad equity market breakout at this point.

Will a Weak Employment Report Be Good News for the Market?

Bad economic news may not be the market positive it once was, especially when earnings are mediocre and the market is technically extended.