In his first "Executive Decision" segment of Mad Money Wednesday evening, Jim Cramer spoke with Frank Calderoni, chairman and CEO of Anaplan Inc. (PLAN) , the financial planning and analysis platform that is at the heart of the cloud software revolution..

Calderoni said companies are looking for agility and resiliency, and aligning finance with your goals and abilities is crucial. Anaplan's software lets companies quickly plan and manage changes in supply chains, human capital, working from home and whatever else the world throws at you.

With Anaplan, companies can compile intelligence from not only their own internal systems, but also from the world around them. By using data from suppliers, customers and other stakeholders, Anaplan can deliver realistic forecasts that companies can depend on.

In the daily bar chart of PLAN, below, we can see that the shares made a peak in February and a retest of those highs at the end of August and the beginning of September. Prices looked like they were making another retest Wednesday but they finished well off their highs. In the short-run I would look for some follow-through selling.

In the weekly Japanese candlestick chart of PLAN, below, we can see how the candles in late August have upper shadows as well as the most recent candle pattern. This tells us that traders are rejecting those highs. The 40-week moving average line has just turned positive but the weekly OBV line shows lower highs since last August. The intensity of buying has faded slightly over the past year.
The MACD oscillator is above the zero line but could narrow in the weeks ahead.

In this daily Point and Figure chart of PLAN, below, we can see a possible upside price target of $74 but a trade at $54.70 or lower could begin to weaken this chart. 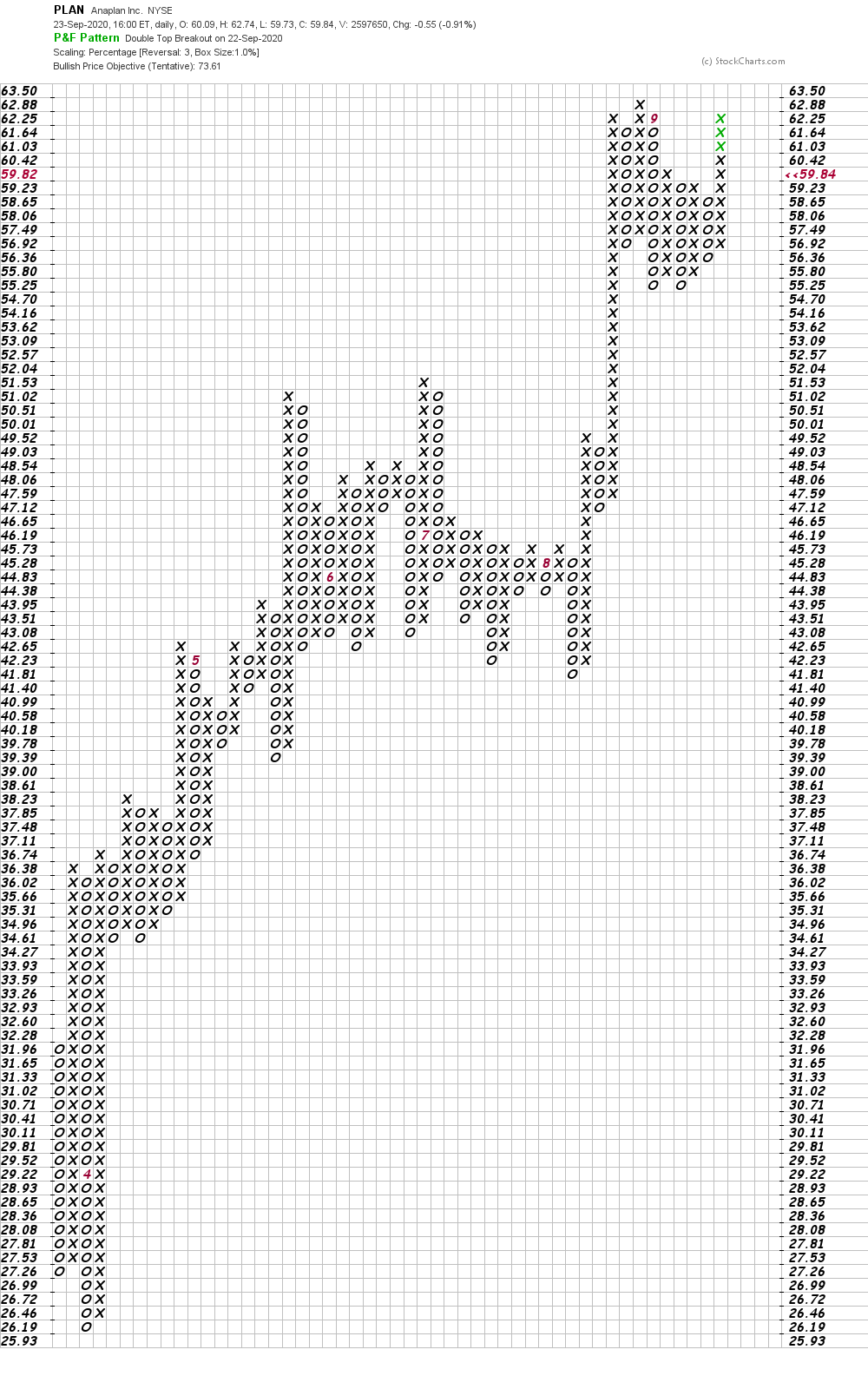 In this weekly Point and Figure chart of PLAN, below, we can see a potential longer-term price target of $104.

Bottom-line strategy: While we can see higher price targets for PLAN on our Point and Figure charts we need to remember that movements of the broader market can dominate. A retest of the lows around $55 is possible and I cannot rule out a decline to the $50 area to fill the gap created in late August.
Get an email alert each time I write an article for Real Money. Click the "+Follow" next to my byline to this article.
TAGS: Investing | Stocks | Technical Analysis | Software & Services | Technology | Mad Money | Executive Interview