This is not your typical Santa Claus rally, Jim Cramer tells Real Money readers. Between vaccines, increased testing and a potential stimulus bill in Washington, Cramer said investors aren't too bullish, they're probably not being bullish enough.

What's the best way to play this rally?

Cramer said it's with Apple (AAPL) , the tech giant that reportedly just boosted iPhone production in a big way to be ready for growing demand in 2021.

We last looked at AAPL at the beginning of the month and wrote that, "Apple is an important company and a leadership stock. It is widely followed by a team of experienced analysts pouring over the fundamentals giving technical analysis an 'edge' in the equation. AAPL should eventually make an upside breakout but in the meantime you will probably have to endure more sideways movement."

AAPL looks like it has ended its sideways move, so let's check in on the charts and indicators again.

In the daily bar chart of AAPL, below, we can see a mixed picture. The shares have improved this month and have broken above the October high. Prices are trading above the rising 50-day moving average line and the rising 200-day line.

The On-Balance-Volume (OBV) line has moved sideways and has not broken above its October high as prices have. This is a subtle bearish divergence. It may mean nothing and it could be a clue that the current advance is vulnerable. The Moving Average Convergence Divergence (MACD) oscillator is in a bullish alignment above the zero line.

In the weekly bar chart of AAPL, below, we see a promising-looking picture. Prices are in a longer-term uptrend and are trading above the rising 40-week moving average line.

The weekly OBV line is moving up in a bullish fashion and telling us that buyers are more aggressive. The MACD oscillator has narrowed and is close to a new buy signal.

In this daily Point and Figure chart of AAPL, below, we can see that prices made a new high for the recent move up and there is a $149 price target being indicated. Another observation to keep in mind is that downside reversals in AAPL have come with little warning in the past. Top building is not part of Apple's vocabulary. 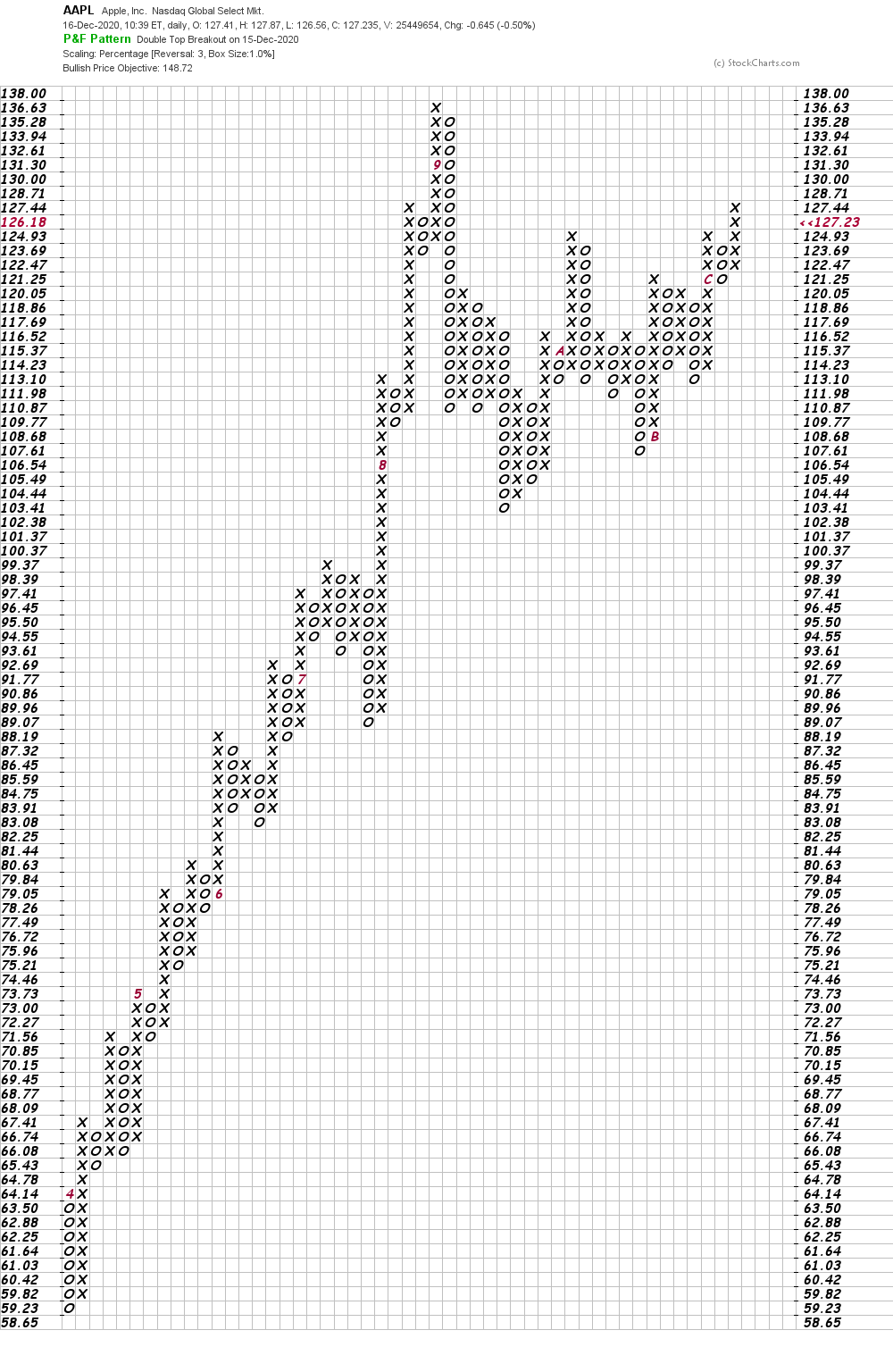 Bottom-line strategy: Shares of Apple are pointed up at this point, but in the back of my mind I have trouble with the current state of sentiment as being too bullish on the overall stock market. Trade AAPL from the long side but only risk to $115.

Get an email alert each time I write an article for Real Money. Click the "+Follow" next to my byline to this article.
TAGS: Investing | Stocks | Technical Analysis | Technology | Technology Hardware & Equipment | Telecommunications | E-Commerce | Gaming | Mad Money | Telecom Services

We are no longer in a bull market that will forgive our mistakes, so take precautionary measures. Here are a few I recommend.

Here's where to go long.

Jim Cramer: We're Back to the Market That Baffles

Welcome to the 'new' old world -- the world we had before all the new people and their money came into the market.

No Longer a Boom or Bust Cyclical Stock, Micron Technology Has Found Consistency

Here's where I would consider getting long.