Following Monday's market selloff, the majority of the index charts are now in near-term downtrends and in weaker condition while market breadth continues to degenerate.

However, the McClellan 1-day Overbought/oversold Oscillators are very oversold and suggest some degree of short-term bounce/pause potential, which could be manifesting in Tuesday's trading. Still, none of the other data is offering similar encouragement.

Investor psychology continues to display an overabundance of bullish expectations while insiders have yet to show any real appetite for buying their stock at these levels. 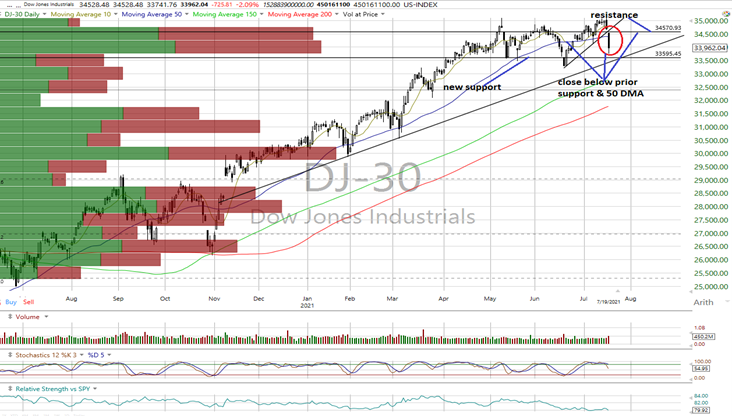 All the major equity indices closed lower Monday with negative internals on the NYSE and Nasdaq. More damage was incurred as the S&P 500, DJIA, Nasdaq Composite and Value Line Arithmetic Index closed below support.

The DJIA closed below its near-term uptrend line as did the Nasdaq 100.

As such, the DJIA (see above) and Nasdaq 100 are now in neutral near-term trends while all others are now in downtrends.

Regarding breadth, Tuesday's negative internals left the All Exchange, NYSE and Nasdaq cumulative A/Ds negative and below their 50-day moving averages with the Nasdaq also violating its 200 DMA.

Stochastic levels are now oversold on the MidCap 400 and Value Line Arithmetic Index, but bullish crossover signals have not yet appeared.

However, the psychology data was disturbingly unmoved.

The Rydex Ratio (contrarian indicator), measuring the action of the leveraged ETF traders, remains bearish and up ticked to 1.2 as they remain leveraged long. One would have expected some lessening of long leverage at this point.

This week's contrarian AAII bear/bull ratio (24.5/41.67) remains in mildly bearish territory while the Investors Intelligence Bear/Bull Ratio (contrary indicator) continues to suggest an excess of bullish expectations on the part of investment advisors, despite the recent market drubbing, at a bearish 15.3/61.2. Important market bottoms usually find a much higher degree of fear on their part.

The Open Insider Buy/Sell Ratio remains a neutral 29.8 and still shows a lack of appetite for insiders to buy their own stock.

The charts and data still suggest caution is warranted for the near-term, although some bounce is now likely due to the OB/OS condition.

Get an email alert each time I write an article for Real Money. Click the "+Follow" next to my byline to this article.
TAGS: Indexes | Investing | Markets | Small Cap | Stocks | Technical Analysis | Trading | U.S. Equity