Let me begin by saying I do not know what Russia's plans with Ukraine are, and even if I knew what they were, I'm not sure how the market would react on any given day. So let's discuss what I do know, or at least what I think I know!

I do know that two months ago everyone saw that if the iShares Russell 2000 (IWM:NYSE) broke under 210 it would complete a top. That is what happened. And you know what? That top measured to 190 and it was reached in about a week. It was that fast.

It then got grossly oversold and rallied. Right back to resistance. Like the chart came out of a textbook.

Now let's take a look at the chart of the S&P 500 where everyone can see the head and shoulders top. Do you want to use 4,300 (where my flat line is) or do you prefer the 4,225 area where those spike lows are? (July and January). Does it matter? If the S&P 500 cracks under there, here's what I expect.

I expect the missing panic will arrive (although I do not think we 'need' panic to get a bounce). I expect if the market is down early this coming week, we will be sufficiently oversold late this week to get a rally. I have a few different indicators that I use for a short-term oversold condition, and right now there is a wide window between this Wednesday and March 2 for an oversold condition to develop. If we get some more downside early in the week, I will delve further into these indicators with you.

I expect, whether the market is down or not early in the week, the 30-day moving average of the advance/decline line will be oversold by the end of this week/early next week.

I expect, because the bonds finally rallied, the number of stocks making new lows on the NYSE will not exceed the prior peak of 792. I expect that Nasdaq's peak reading of new lows at 1,755 will also be contained, thus providing the market with a positive divergence.

I expect the CBOE Volatility Index (VIX) would get jumpy. I don't know if the Investors Intelligence bulls will fall much more or if the bears will rise over 30% (they are currently 27%) but if the S&P cracks that level I don't imagine we'll have more bulls. I also don't expect the American Association of Individual Investors (AAII) to see a large jump in bulls from the current 19% if we should break.

I expect we will see the 21-day moving average of the put/call ratio for exchange-traded funds rise even more. Although in the last 21 trading days, this metric has only had one reading under 1.0 so it's pretty clear folks are quite prepared should the market go down. Is the market ever that accommodating? 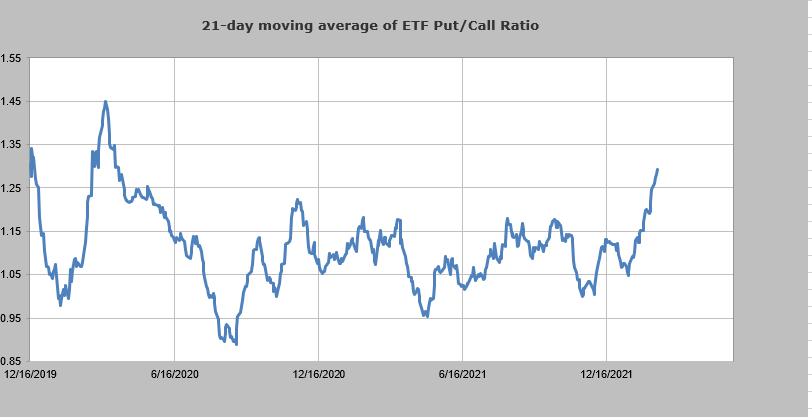 Finally, the Daily Sentiment Index (DSI) for the S&P 500 is now at 18. Nasdaq's is at 15. In late January the S&P got to 17 and Nasdaq got to 13. So I expect, should the S&P break, these two metrics will get to single digits. If I'm wrong, then I'd expect them to be tweens. Either way, we know such a low reading for this indicator is not bearish.

So I say let the S&P break. It would give us an opportunity to enjoy another oversold rally.