Not So Bad, Really

It was reported that "the stock market" traded lower Thursday on continued frustration over the lack of an agreement on new fiscal stimulus, on increased viral spread across Europe and North America, and in reaction to earnings. Well, at least at the headline level, large-cap equities did close slightly lower on Thursday than they had on Wednesday. That much is true.

The story, in my opinion, is somewhat sensationalist, and really borrows from the day prior. We come in on Friday morning, at least statistically, with a three-day losing streak for large-cap equities intact. That just does not really tell the tale.

For starters, earnings season is still very young but has gotten off to a pretty decent start. Of course, there is frustration with Washington, and yes, the virus always remains both troubling and suppressive in terms of its impact upon economic activity (not to mention the state of societal health).

Now, I track a number of equity market indices. Excluding industry-specific measures (other than the Dow Transports because that average includes a number of industries within a larger grouping that remain well short of actually being referred to as a sector), I print out a checklist of index/average performance every night. Indices that show a 0,5% increase or greater for the day print out in green, down 0.5% or greater prints red, and anything in between the two prints in orange. For Thursday, there was only one red -- the Nasdaq 100 (down 0.72%). There were four greens -- the already mentioned Dow Transports (+0.85%), the S&P 400 Mid-Caps (+0.93%) and both small-cap averages, the S&P 600 (+1.33%) and the Russell 2000 (+1.06%).

I would like to note that the airlines were a terrible weight upon the transports, led lower by United Airlines (UAL) . This means the rails and truckers were exceptionally strong. Again. Keep an eye on that.

Thinking more broadly, our three major (if one is kind to the Dow Industrials) equity averages all printed out in orange last night. The Nasdaq Composite and S&P 500 both closed at the top of their daily ranges (important) and on light trading volume (also important) at that. In other words, Thursday really was not so bad. Not at all.

One point that I tried to make to readers about 24 hours ago, was that the S&P 500 had filled a gap that needed filling on Wednesday, but that the Nasdaq Composite had not gone there yet, and in my words, still probably could see about 130 points of downside without breaking anything important technically. The index actually bottomed out on the opening bell, down a rough 209 points from that Wednesday close, effectively filling that gap, and spent the rest of the day in recovery. A handle either is being or has been attached to the already created cup pattern. Having hit resistance in close to the same spot all week, the pivot upon an attempt to break out for the Nasdaq Composite is now 11,965. 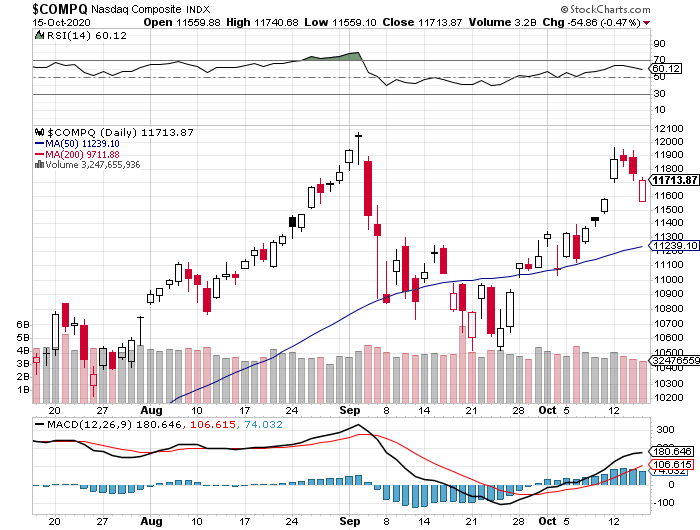 Remember, gaps do not have to fill, but they usually do. This has been true since I was a kid just starting out in this game, and has become even truer over the years, if possible, even for individual stocks that one might be trading for themselves.

Understand one thing: When human traders controlled price discovery, fundamental analysis was at least as important, perhaps even more so, as technical analysis. Emotion was also a factor.

As markets have evolved into a high-speed game where profit creation became more of a focus than getting the right price, there is now more overshoot than there should be, and technical analysis, at least for traders, has become more important than the fundamentals.

Do I like that? Of course not, even if it makes me more accurate than I ever could have been in the old centralized, two-sided, ongoing. open outcry auction market model that I enjoyed participating in so much. That was fun. One had to be quick of mind, and quick on their feet. That was also hard. Succeeding in this kind of market requires understanding how algorithms work and what their goals are. This game will always be difficult at times, but not close to the level of difficulty in beating (and getting beat by) fellow human beings who will seek revenge. You can beat high-speed computers if you understand that "they" are trying to game you as well as each other. Understand that they rely on guys and gals just like us who can read a chart.

Breadth across the landscape of equities was generally positive on Thursday. Six of the 11 S&P sectors closed out the session in positive territory, and that is without Information Technology or Communications Services, as Internet names dragged that sector down into 11th place on your daily performance tables. (The Dow Jones U.S. Internet Index closed -1.1% for the day.)

On our "down" day, winners beat losers at the New York Stock Exchange by more than 5 to 4, advancing volume beat declining volume by almost 2 to 1, and new highs beat new lows by more than 7 to 2. Sounds like a real drubbing.

It was slightly tougher sledding uptown at the Nasdaq Market Site, as winners beat losers by roughly 6 to 5, advancing volume just edged declining volume, and new highs beat new lows by almost 2 to 1. Trading volume was really sideways on the day at both exchanges, and had been generally on the low side all week, with the exception of Monday, which was a big "up" day.

Oh, I also wanted to point out one more item along these lines: There appears to be some strength building across small to mid-caps, as well as transports. This, while there is some mild basing or consolidation across market-leading large-caps. This can signal expectations of improved market conditions based upon organic economic growth.

I know, I see it, too. The economy is struggling to maintain its current trajectory of recovery. The market is certainly anticipating something, and I think there is a positive vibe, while we exist in a negative reality. No, I don't understand it yet, but you will be the second to know when I do.

Take a look at the CBOE's Put/Call Ratios. Slice it any way you like; Total, Equities Only or Indices Only, measured in each and every way, these ratios remain below both 50- and 200-day simple moving averages and have for the most part all week, while the VIX has worked its way higher, though the VIX is hardly anywhere close to alarming levels.

Other than being re-infected with this virus? Werewolves. Other than the virus and werewolves? Labor markets.

The numbers for jobless claims remain too large, and with state-level benefits running out, the data are becoming even murkier. It has become clear that while the threat of infection prevents a return to societal norms that existed as recently as last March, those norms will be vastly different on that day when folks hug, shake hands and exchange cash again, whenever that day is. Change has been brought forward rapidly, and we may not understand how certain occupations will be valued or have been devalued until perhaps a year or two after that first handshake.

There was a time when nothing got done in any town without involving a blacksmith. Blacksmiths were central to economic activity, as was livestock. Anyone know a blacksmith? I know of one, and he is the only one I believe is anywhere near here. So, where are we? Initial Claims are back on the rise. Continuing Claims are down, but mostly because more folks rolled off of their state-level benefits than were called back by their employers. All while our legislators play games with your vote.

The End of Days?

Quarles then asks "Will there be some indefinite need for the Fed to provide, not as a way of supporting the issuance of Treasuries, but as the way of supporting a functioning market in Treasuries, to participate as a purchaser for some period of time?" Folks need to understand that the Fed is already purchasing $120 billion per month in Treasury and mortgage-backed securities.

The end of days? That's a little strong. Perhaps something more like "the beginning of the end of the debt super cycle." Just a thought. QE 4eva.

1) I am going to have to take some more Peloton (PTON) off up here. This thing has run way beyond all legitimate price targets, including my own.

2) You kids see the range for Datadog (DDOG) on Thursday? 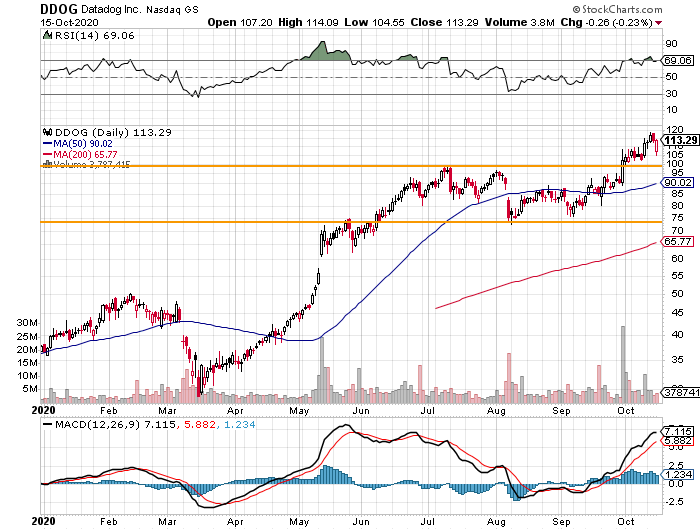 This name missed the target ($120) by about $2 twice this week, prior to Thursday's mayhem. The pivot point of $99 now becomes the panic point. I see another run at $120, and I take off at least 25%. I need to get down to something closer to house money.