A lot happened during Tuesday's market. And nothing happened.

One week ago I surmised that we might see a market of chop -- one where we had big down days that were scary and big up days that made you feel good. Thursday was the former. Friday was the latter. And Tuesday had a little bit of both.

But the real story from Tuesday's action was that all those bearish energy charts that I have been harping on finally fell of their own weight. Or maybe it was the strength in the dollar that caused it. Or the fears of recession. Or, well, let's just leave those narratives to those who write them.

The yield on the 30-year bond broke that uptrend line last week and Tuesday gasoline followed. So at least we know which one is the leader now.

I expect bonds to find support in this 3.0% area (green line) as they will get a little oversold soon. But I am sure you can see that a rally from the green line makes it possible that yields form a head-and-shoulders top on such a rally. In other words, the rally, should it come, would give us a missing right shoulder.

Gasoline has some support here, as well (blue line). But a bounce runs into resistance in the $3.50-$3.60 area now. Oh and did I mention that three weeks ago no one much cared when I showed these charts almost daily. Now, you have to have been living under a rock not to have noticed them. I saw gasoline, crude oil and yes, even diesel, charts everywhere I turned. Like a car crash, folks could not take their eyes off them.

Then there is the U.S. Dollar which soared on Tuesday. The breakout actually measures to the $109 area, but let me note that the Daily Sentiment Index is at 88. The DSI for the euro is at 8. So the runway for this breakout is short unless/until there is a pullback.

What about stocks? Breadth on the New York Stock Exchange was, not surprisingly, negative, despite the comeback. Volume was lopsided to the downside, also not a big surprise, considering the value stocks were taken to the woodshed.

Notice that despite the collapse in energy, the energy exchange traded fund (XLE) struggled to break support. So the commodities themselves were sold hard, but the stocks, not so much.

Over on Nasdaq, where a week or so ago we looked at the higher lows in the indicators, we saw the Nasdaq Composite rally twice what it was up on Friday, yet upside volume was 69% on Friday and 69% on Tuesday. So, basically it may have felt better for growth stocks Tuesday vs. Friday, but it was pretty similar. 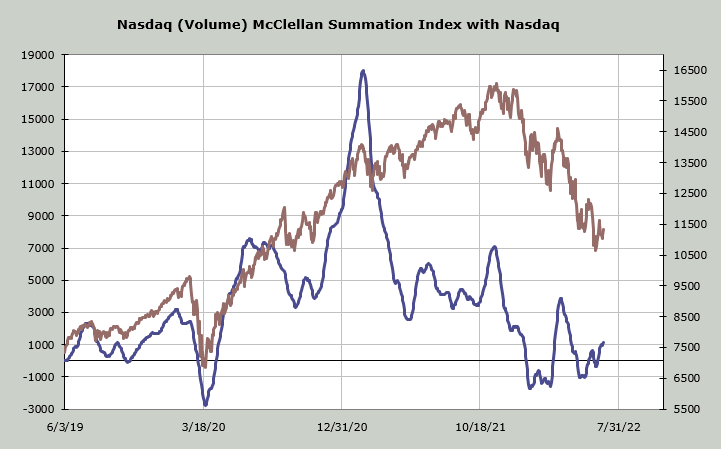 Here is the McClellan Summation Index for Nasdaq using volume, where you can see the higher low and the (very) marginal higher high. I would consider a move over the March high to be something to write home about.

Get an email alert each time I write an article for Real Money. Click the "+Follow" next to my byline to this article.
TAGS: Investing | Oil | Stocks | Technical Analysis | Energy |