The charts of the major equity indices remain bullish. However, some of the psychology data has intensified its cautionary signals as insiders have increased their selling activity to bearish levels while the crowd remains eager to buy, a combination that always gives us pause.

The only index posting a decline Tuesday was the Nasdaq 100 (see below), as all others posted gains with the Dow Jones Transports, S&P MidCap 400, Russell 2000 and Value Line Arithmetic Index posting new all-time closing highs.

All the index charts remain in near-term uptrends as are the cumulative advance/decline lines for the All Exchange, NYSE and Nasdaq. 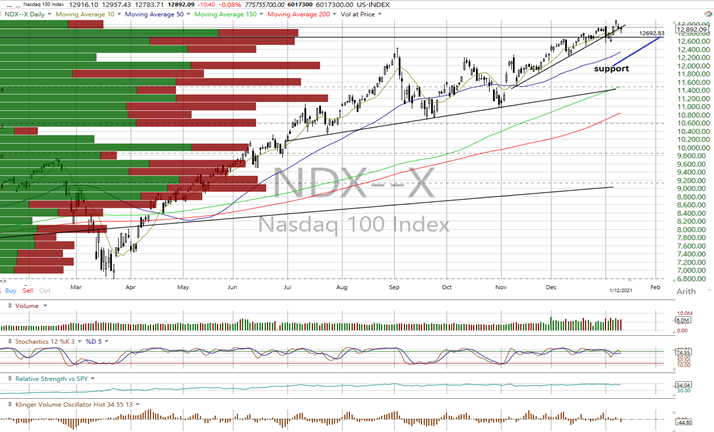 Some of the market data have become more disturbing.

While the one-day McClellan Overbought/Oversold Oscillators are still neutral (All Exchange: +20.53 NYSE: +4.92 Nasdaq: +33.77), insiders have ratcheted up their selling activity to a bearish 22.3 Open Insider Buy/Sell Ratio, while the leveraged ETF traders, measured by the detrended Rydex Ratio (contrarian indicator) remain very leveraged long at a bearish 1.24.

As stated earlier, eager crowd buyers juxtaposed with actively selling insiders always raises a yellow flag for us. Important market bottoms have coincided with the exact opposite relationship of that which currently exists.

Additionally, this week's Investors Intelligence Bear/Bull Ratio (contrary indicator) and AAII Bear/Bull Ratio saw a rise in bullish sentiment to 16.8/64 and 23.47/47.9, respectively, leaving both on bearish signals that suggest an overabundance of bullish expectations.

Valuation continues to appear extended as well. The forward 12-month consensus earnings estimate for the S&P 500 from Bloomberg rose to $166.71 per share, leaving the S&P's forward P/E multiple at 22.8x, while the "rule of 20" finds fair value at 18.9x due to the recent rise in the 10-year Treasury yield.

Our "neutral" near-term outlook is unchanged as the charts remain positive while enough signs of caution exist to warrant some skepticism.

The indexes are assumed to be representative of overall market health when the reality is they are misrepresenting it.