It's a Friday, last day of school here, and we're staring at a three-day weekend. I'm focused more on building watchlists than making trades.

Yeah, I may be getting a little distracted watching the craziness in the meme stocks as names like AMC Entertainment (AMC) , GameStop (GME) , Sundial Growers (SNDL) , Koss (KOSS) , Palantir (PLNT) and Beyond Meat (BYND) are dominating the action. Also, welcome to the meme world, BYND.

So, this weekend, Twitter (TWTR) , Reddit, and other social media platforms will be full of chatter about AMC going to $1,000 or folks begging for their biggest holding to be anointed the next "Chosen One" by WallStreetBets. I'm guessing every CFA is staring at those three letters behind their name and wondering why they bothered. One meme stock could have changed their lives without the long, arduous task of studying and testing.

I do have my eye on Desktop Metal (DM) . We've seen several names that came public in the same manner of DM start getting the attention of traders now that some speculation has reentered the market. Why this one makes the watchlist but not execution yet is the pesky 50-day simple moving average (SMA) staring us in the face.

A close above $13.85 and we only have a little resistance at $15 before we're testing $18 to $20. The Moving Average Convergence Divergence (MACD) is hitting new highs, the parabolic stop-and-reverse (PSAR) flipped bullish Friday although we would want to see that hold into the close, and the Full Stochastics is strong. The latter there does have the potential for a lower high, but I see the Full Stochastics tracking price rather than leading it. 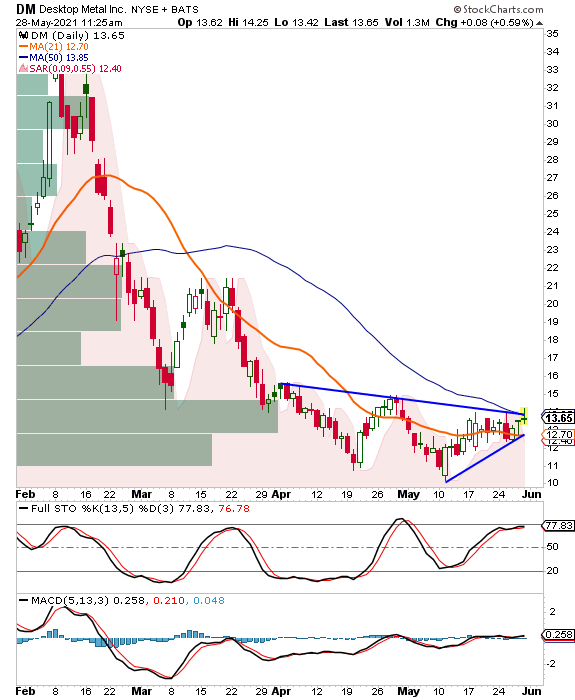 Despite strong revenue Desktop Metal did miss its earnings per share target last quarter. However, it's still been able to rally.

The clear stop level is $12.70. I would want to be hedged below that level. With a double-digit short float percentage, I don't have a lot of interest shorting below $12.70, but I could see a retest around $10 if we broke under $12.

Simply put, I wouldn't be stubborn on the long side. If speculation is coming back into the market, which it appears that way, then buying the breakouts and winners is the better play.

Don't be afraid to knock off a little early today, catch some Vitamin D, and enjoy a relaxing three-day weekend.